Virtualization is one of the most effective ways to manage a modern organization’s IT infrastructure.

If staff members need new desktops or servers, the IT team can configure and spin them up from an existing resource pool without adding new hardware. Still, some agencies may not want to house confidential data offsite with cloud-based services, and, until recently, few workable ­alternatives existed.

Enter Cisco Systems' HyperFlex, which is engineered on the Cisco Unified Computing System to provide the advantages of cloud-based virtualization services from a secure, in-house environment. With HyperFlex, Cisco has created a hyperconverged infrastructure solution that integrates computing, software-defined storage and virtualization with software-defined networking on the Cisco HX Data Platform. An IT shop can deploy an entire infrastructure in just a few hours — and in a small footprint. Even so, a single HyperFlex system can scale to 29 terabytes of data, while making management of virtualized components speedier and less complex.

A Familiar Interface for Spinning Up Virtual Machines

I tested a HyperFlex configuration ­running at an in-house data center that supported several hundred virtual machines (VMs). The key to maintaining the system is the HyperFlex management console. Cisco designed the console to incorporate into VMware’s vSphere client. Most admins will be familiar with the interface, ready to build out and maintain VMs from day one. 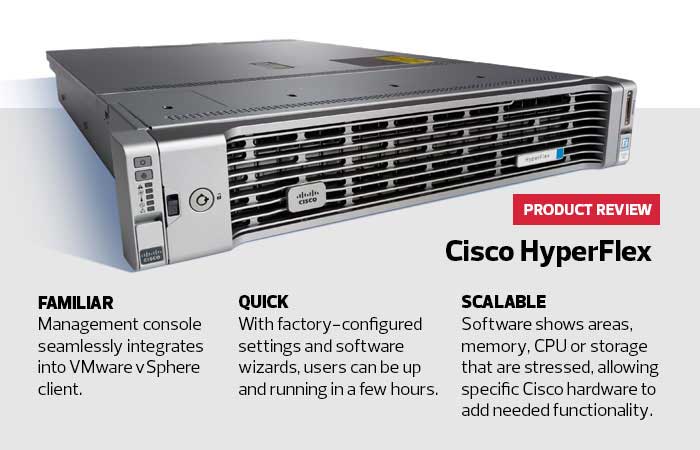 SPECIFICATIONS: Processors: Up to four per node, Storage Capacity: From 7TB to 29TB, Size:  Between 1U and 6U, Setup Time: Less than one hour for all configurations, Uptime: 99.999 percent, Estimated Savings Over Traditional Storage Costs: 80 percent

Managing VMs After They Are Created

It was also easy to combat one of the biggest problems of virtualization: VM sprawl. Spinning up new ­systems is easy, but so is forgetting about them afterward. HyperFlex combats sprawl by indexing every virtual asset within a ­network and showing all of the usage histories. In addition to the desktops I created, it was easy to find more desktops that were taking up resources, even though they hadn’t been used in months. As admin, I could flag them for further investigation, or simply wipe them out with a few clicks.

Even advanced virtualized configurations are supported like everything else within the HyperFlex interface. I was able to configure clusters to work on high-performance tasks within my network. The HyperFlex system supports up to eight clusters of eight nodes each.

The Cisco HyperFlex system is a perfect tool for any organization seeking to tap into the efficiencies and economic benefits of virtualization. It provides an almost cloudlike management functionality, while allowing data to remain safely protected.

The deployment of new applications can be a dangerous time for any organization. Without proper testing, there is no way to know whether a new app will conflict with existing programs, producing potentially disastrous results. We took on the role of an application test administrator to see how we could deploy Cisco HyperFlex to mitigate these dangers. We were pleasantly surprised to discover how easy the process was.

The first thing we needed was a reference architecture that mirrored the corporate desktops or servers where the new app would reside. Creating this VM was easy using our existing network templates. With that in place, the next step was to clone that machine so we could test the new app in a working environment with multiple clients.

Cisco’s HyperFlex management console makes this extremely easy with its Ready Clones feature, accessible with a single click that triggers a software wizard. All we had to do was provide a name for the test machines and specify how many we needed. The program supports the creation of up to 25 at a time.

Depending on how many clones a user creates, the system can take a few minutes to propagate. Each clone receives your chosen name and a number, so ours were AppTest1, AppTest2 and so on. You then need to power them up, at which time each VM gets an individual MAC address and IP address.

After that, we installed the app we wanted to test and ran it through its paces. The system logged any conflicts, but this in no way affected systems within the production environment. Once the testing was complete, we simply destroyed the clones and reclaimed those resources for the overall pool.

The Cisco HyperFlex system can take the guesswork out of application deployment, identifying conflicts and threats long before they make it to the core network.