After experiencing the benefits of a private cloud, Somerset County, Maine, now shares those rewards with neighboring communities.

Since virtualizing its servers a year and a half ago, Somerset County's IT infrastructure is easier to manage, more reliable and more affordable. IT operating costs have dropped 40 percent, thanks to server consolidation and reduced power and cooling consumption.

The new cloud infrastructure eases server and storage provisioning, which allowed the county last fall to begin hosting emergency dispatch and public-safety software for nearby Franklin County and its municipalities.

"We have this robust infrastructure, and we wanted to leverage it," says Peter A. Smith, Somerset County's technical services director. "We reached out to our neighboring communities and learned that Franklin County wanted to run the same public-safety software we do. So we proposed hosting it for them."

"It's about leveraging our tax dollars and working together."

As state and local governments face ongoing budget constraints, an increasing number of them have embraced cloud computing as a way to provide IT serv­ices at a lower cost, says Mark Bowker, a senior analyst with Enterprise Strategy Group. "They're looking for alternatives that deliver favorable economics."

Cloud savings are real. According to CDW•G's 2013 State of the Cloud Report, organizations say they have cut IT costs by 13 percent since moving to the cloud and they expect up to 25 percent savings in four years. Beyond cost savings, the top benefits of the cloud are increased efficiency, employee mobility and the ­ability to innovate, according to the report, which surveyed 1,242 IT decision-makers in August and September.

Government IT administrators can build a private cloud, outsource to a public cloud or deploy a hybrid solution. Deciding which cloud model offers the best fit depends on several factors, and each situation is unique. "It's a security, compliance and comfort-level conversation," Bowker says. "More than anything, it comes down to what investments they have already made in their data centers."

According to the CDW•G report, the three biggest barriers to cloud adoption among state and local governments are concerns with security of proprietary data and applications (45 percent of those surveyed), concerns with the performance of cloud services (29 percent) and the fact that senior-level non-IT management is holding them back (27 percent).

Somerset County is among those local governments that have implemented their own private clouds, then used the infrastructure to offer IT services to other jurisdictions. Somerset County, Maine, shares software with its neighbors in a cloud model, says Peter A. Smith.

Franklin County's Sherriff's Office and 911 Emergency Center went live with the cloud service in October. Since then, three police departments and two fire departments within Franklin County have deployed the service and another four law enforcement agencies await ­implementation.

It's more cost-effective for the communities to pay a yearly fee to use Somerset County's cloud service. "It's about leveraging our tax dollars and working together," Smith says. By combining their buying power, the group purchases software licenses at lower multi-agency rates, plus the subscribing agencies no longer have to buy or maintain hardware or manage the technology.

It's not the first time Somerset County has hosted public-safety software, but it's the first time the county has done so through a cloud infrastructure and to communities outside its own county.

In 2005, Somerset County began providing four towns access to its public-safety software through a virtual private network, and in 2007, through remote web access via Citrix XenApp. Last August, Somerset County virtualized its servers with Microsoft Hyper-V. As a result, the county is able to offer software as a service (SaaS) to other communities.

To ensure redundancy, the public-safety software and Citrix XenApp run on a virtual machine in a mirrored, clustered system of six servers split between data centers in the county courthouse and the 911 communications center.

Building a private cloud was the right decision for Somerset County, Smith says. "It gives us the most flexibility moving forward, and we can grow with it."

Sussex County, N.J., is pursuing a similar strategy. The county virtualized its servers with VMware to reduce costs, and plans to share its private cloud with the county's 24 towns.

CIO William Kosinetz says it's a win-win situation: The county maximizes the use of its infrastructure, while the towns receive infrastructure, platform and SaaS offerings from a service provider they know and trust. "It seems more palatable for local government to go to their county for services than to the public cloud," he says.

Thanks to the cloud infrastructure, the county can segregate each town's applications and data to ensure security. For continuity of operations, Kosinetz has installed backup generators and subscribed to multiple Internet connections.

Many towns have expressed interest in using the county's cloud, Kosinetz says. In August, the county piloted a document management system for a local technical high school, and it will soon offer GIS mapping software to a town. Moving forward, towns could make their own applications available to each other over the cloud, he says.

Sussex County will charge a small fee to defray IT costs. In the meantime, the county is reaping the benefits of its cloud. Today, eight physical blade servers run 86 virtual servers, cutting operating expenses by 45 percent.

While some government agencies may take a cautious approach with cloud services, particularly the public cloud, a Minnesota organization fully embraces the technology.

Last fall, SELCO migrated employees from Microsoft Exchange e-mail to Google Apps, a move that immediately saved $21,000, says Donovan Lambright, an automation librarian who manages the nonprofit institution's IT department. "Our budgets are under constraints, so anywhere we can cut, we are interested in," Lambright says.

Next July, the organization plans to bolster data backup by hiring a public-cloud storage provider to back up the data stored on its Barracuda Backup Server appliance. And in the coming year or two, Lambright intends to turn to another public-cloud provider to host its library websites and online card catalog.

27% of state and local governments are implementing or have already adopted cloud services in 2012, up from 23% in 2011

SELCO wants to move applications out of its data center as much as possible, not only to reduce costs, but also to improve disaster recovery, Lambright says. "We've had a couple of major outages in the last year, so moving services to the cloud will help with uptime."

The organization is even open to hosting its library management software in the public cloud in the future, as long as SELCO saves money and its data privacy and security concerns are met.

Some IT administrators are scared off by security and privacy concerns, but for Lambright, those issues are not insurmountable. "You shouldn't reject the cloud completely because of its challenges, but you also shouldn't rush into it with your eyes closed. What we're trying to do is find a middle ground," he says. "The benefits from a cost and reliability standpoint speak for themselves — as long as you do it right."

Elsewhere, the state of Illinois is beginning to adopt public-cloud services because of the solution's potential economic and technological benefits.

Taking a cue from the federal government's "Cloud First" mandate, Illinois Gov. Pat Quinn ordered state agencies to consider cloud services first when purchasing new technology. It was part of an executive order to use IT to promote transparency of public data and to increase efficiency and savings.

Prohibitive costs to operate the state data center are pushing Illinois to the cloud.

"The rates we are charging our agencies for infrastructure services continue to increase and are straining their budgets," says state CIO Sean Vinck.

The Illinois Department of Corrections, for example, will replace approximately three dozen separate offender-tracking applications with a Microsoft cloud application called Offender 360. The application will boost efficiencies and productivity while saving the state an estimated $6 million during the first two years, Vinck says.

Data security was an initial concern because the software stores prisoners' personal data. But after a thorough examination of Microsoft's SaaS, the state's IT staff determined that the security standards and protections provided by the cloud are sufficient, Vinck says.

The CIO believes Illinois will end up with a hybrid cloud approach. As more agencies successfully adopt public-cloud services, the state will most likely be forced to redesign its own data center into a private cloud to stay competitive, Vinck notes.

Overall, every government agency, large or small, needs to consider cloud technology moving forward because of its potential economic and technical benefits, Vinck says. "The cloud is making access to infrastructure, platform and software as services available in a low-cost, effective way that was not imagined even 15 years ago."

When shopping for public-cloud services, ask providers questions about security, privacy and uptime, and make sure their assurances are written into the contract, says Donovan Lambright, the automation librarian for Southeastern Libraries Cooperating/Southeast Library System (SELCO) in Minnesota.

For example, before SELCO moves its integrated library system into the cloud, the organization will take a hard look at safeguarding patrons' personal information. Lambright will seek specific details about how hosting companies secure their data centers, including security architecture and the rules that govern their employees in terms of data access.

"We will do our due diligence," he says. 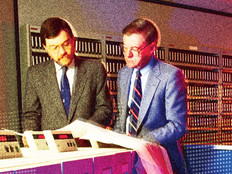