When IT Asset Manager Gerry Woock sought to standardize on a desktop PC model for two Oregon agencies, he had a clear directive: Think small.

Woock's agency, the Oregon Health Authority, and the Department of Human Services, for which OHA handles IT purchasing and installation, were both due for a widespread PC upgrade after a budget freeze. "Between the two agencies, we touch every life in Oregon, from ensuring the quality of water to testing X-ray machines for radiation emission levels," says Woock, who recently retired. "A majority of users work in an office, so desk space is always at a premium."

When funding became available in 2012, the Health Authority decided to deploy the Lenovo ThinkCentre M92p Tiny desktop to 4,000 users. The tiny form factor (1.4 inches by 7.1 inches by 7.2 inches) enables the desktop PC to sit under a monitor, mount to the back of a monitor or attach to a wall.

Along with the compact design, the Tiny desktops rival the power and performance of their larger counterparts. Woock says the desktop's Intel i5 dual-core processors, 8 gigabytes of memory and 500GB hard drive make it a solid successor to the agencies' legacy tower systems.

Why Notebooks Aren't Always the Answer

Some contend that, rather than selecting a shrinking desktop footprint, IT leaders should migrate to notebooks. But for government, that's not always the best strategy. "There are many cases in government where data cannot leave the office, so a desktop is the safest solution," McCarthy says.

Woock adds that price also comes into play. "By the time you buy a notebook, docking station and dual monitors, the cost can be 50 percent higher than a desktop," he says. "Also, a majority of our users just don't need a mobile solution."

"By the time you buy a notebook, docking station and dual monitors, the cost can be 50 percent higher than a desktop."

Because the initial rollout was such a success, Woock plans to bring in 5,500 more Tiny desktops in the next year and a half. "The Lenovo Tiny desktop positions us well to move to Windows 8," he says. "We don't jump into PC purchases without a lot of thought because it is very difficult to switch course once you've standardized across thousands of users." 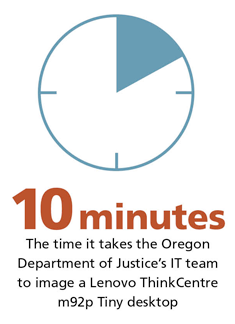 At the Oregon Department of Justice, the PC contemplation is just as rigorous. After skipping fleet replacement altogether in the 2011–2013 biennial budget, James Straight knew divisions needed a PC refresh.

Straight, the desktop services and help desk team lead, started by equipping the Child Support Division with the M92p. During the initial purchase of 300 machines, Straight discovered one trade-off for the smaller size is lack of an optical drive. Workers needed the drive to access information from various entities, such as banks.

Rather than scrap purchase plans, Straight found out how many employees typically use the optical drive and bought 60 to keep on hand. With the Tiny desktops costing $200 less than their tower counterparts, Straight still was able to save $80,000 on the PC order overall.

Straight says users appreciate the space savings on their desks and the fact that they aren't kicking machines under their desks. "They've gone to something that looks cool and sleek and is the size of half a ream of paper," he notes.

The Oregon Department of Justice recently deployed another 395 machines to support the Civil Enforcement and Trial divisions, and the rollout will expand to include the entire agency's 1,800 PCs by April because the technical specifications are similar to each division's tower systems. "I wanted a model that could span the entire fleet and support our move to Windows 7," Straight says.

As Woock and Straight delve deeper into their Tiny desktop rollouts, John Matelski, CIO and director of information technology for DeKalb County, Ga., is currently soliciting and evaluating responses to his request for proposal to replace 4,500 desktop tower systems.

"Most of our towers are placed on the floor, which, of course, isn't ideal," Matelski says. "If a quality, enterprise-capable, small-form-factor device is bid and it's a cost-effective solution, we will definitely take it into consideration."

A Better Image Is Key to a Successful Refresh

Large-scale refreshes such as those taking place in several Oregon agencies can seem daunting. However, IT leaders say it's all about nailing down a standard desktop image and developing an installation plan.

"We have taken time to develop a base image for the PC that is highly standardized," says Gerry Woock, IT asset manager for the Oregon Health Authority. For instance, the image includes Microsoft Office and other, smaller pieces of software used by all employees. "Anything outside of that is installed later by their local technicians."

This upfront work makes ordering and configuring the PCs a simpler, faster and more efficient process. James Straight, help desk team lead for the Oregon Department of Justice, standardizes images as well, but tailors them for each division, adding in applications such as Nuance Communications Dragon Dictate based on user demand.

To speed deployment, Woock created a lifecycle replacement team of four technicians and a tech lead. For each PC delivery, the team goes onsite for installation — a process that he says improves the success of the rollout.