In 2012, Sussex County, N.J., began offering private-cloud computing services to county agencies to enhance efficiency and reduce costs by sharing resources, giving agencies access to improved services that would otherwise be financially inaccessible to them.

Providing a mix of private-cloud services wouldn’t be possible without first laying the foundation through a series of infrastructure deployments. Sussex County made a variety of hardware and software investments to create a business model through which the county can distribute IT services to the supporting community. Any states or localities that want to embark on a similar cloud computing model must first implement a series of key enabling technologies, as described below.

Start with the Servers

In 2007, the county began to feel growing pains in the data center. There were four racks of servers, two racks of Cisco Systems network hardware and one rack of storage and disaster recovery gear. Factor in power and cooling — the data center needed two air-conditioning units and the generator was at peak capacity — and there was no room for growth.

After calculating the cost of servers and maintenance agreements (not counting Microsoft Windows Server because it was already under contract), the IT department determined that it would be less expensive to deploy server virtualization than to buy new servers.

A computer room in a remote facility 12 miles away hosts another SAN segment for continuity of operations. The SAN file system’s deduplication capabilities provide efficiency because only a single master image of each system needs to be stored.

This master image becomes very important when implementing desktop virtualization with thin or zero client computing and smartphone and tablet support. It helps meet the challenges of maintaining storage capacity for cloud computing while achieving efficient capital and operational expenditures.

Sussex County has Windows 7 and 8.1 desktops, thin clients from HP, Wyse and others, and has installed VMware View on existing PCs. It stopped using zero clients, however, because Microsoft licensing requires software assurance on endpoints that don’t have a Microsoft operating system on them.

In host-based virtual environments, each user connects to an individual virtual machine that’s hosted in the data center. The user may connect to the same VM every time, allowing personalization, which is known as a persistent desktop. Or, IT organizations can clone VMs from a master template and users can personalize them; but when the user logs off, the VM is deleted and must be recomposed when the user logs back in. This is called a floating pool and can be configured to store the personalized desktop using the persona management feature of VMware View.

When users work from virtual desktops, all of the programs, applications and data are often kept on a remote server and run centrally, necessitating more storage.

Persistent desktops are needed when IT managers have applications that are licensed based on the MAC address of the desktop. Floating desktop pools, on the other hand, require less storage space but more input/output operations per second. This is because the pool of master templates needs to be replicated on demand.

To increase performance by up to 50 percent, offload the processing of PC over IP graphics by installing a hardware accelerator card in the host server. The card can increase the density of virtual desktops per CPU core and improve the user experience.

Agencies that select floating desktop pools should consider adding a RAID group of SSD storage to accelerate the cloning and recomposing process.

Network virtualization can optimize network speed, reliability, flexibility, scalability and security. Network virtualization is said to be especially effective for environments that experience sudden, large and unforeseen surges in resources. Monitoring bandwidth usage by business unit isn’t currently an issue for Sussex County, but as network services grow, there needs to be some documentation of consumption to maintain service levels and purchase the correct amount of bandwidth. n 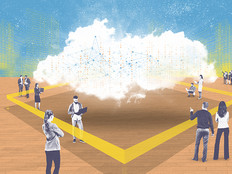