James C. Buston says Auburn, Ala., has taken a cautious approach to cloud adoption, moving processes there only when it makes sense.

Not everyone is convinced that a hybrid cloud strategy is the best option, and even those who think it may be are taking cautious steps.

James C. Buston, the assistant city manager and CIO of Auburn, Ala., falls into this camp.

“We attack all of our issues from the primary perspective of delivering the best possible service experience for our customers,” he explains. “Cost is always important, but it is not our primary concern when we are evaluating existing programs or looking to initiate new programs. With that strategy in mind, we first rely on how our customers have told us that they wish to interact with us.”

In Auburn, that means making sure constituents and employees always have fast, reliable service at whatever department or agency they are dealing with, Buston says.

Buston takes several other considerations into account too. Some applications are only available in the cloud, which is where Auburn’s hybrid component will come from, Buston says. Officials there are close to moving the SharePoint operation into the Microsoft cloud. At some point, he also believes that he will need to move to Office 365. 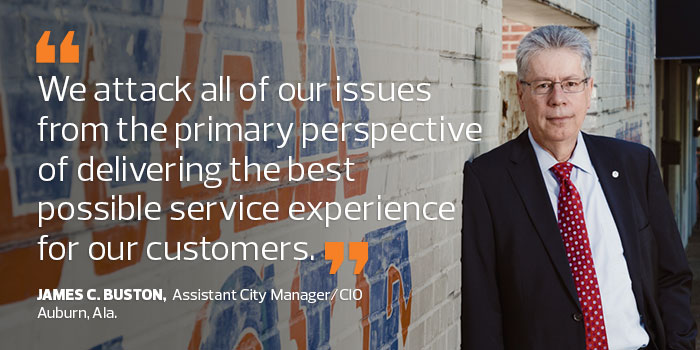 “That is why, for now, we are focusing on making sure our infrastructure — most notably in the way of redundant and robust Internet links — is suitable for moving to some cloud-based applications.”

Such a cautious and deliberate strategy is a good one, says Chris Dixon, senior manager for state and local industry analysis at Deltek.

“Governments should work with their long-standing vendor partners to evaluate the cloud suitability of various platforms and applications,” he says. “Most of the major vendors are offering cloud-optimized products and solutions that might allow for easier adoption of hybrid cloud solutions as part of regular lifecycle upgrades. This makes moving to the cloud feel like more of a natural evolution than a disruptive paradigm shift.”

When It Makes Sense to Go with the Hybrid Cloud Route

Hybrid clouds efficiently blend public cloud infrastructure with on-­premises IT, enabling governments to maintain an important mix of private and public cloud services. According to a Center for Digital Government survey, 41 percent of respondents said a hybrid cloud was the best fit for their agency compared with a public or private cloud alone. That may be because it gives organizations the best of both worlds.

“The key idea is that the hybrid design is intended to mitigate a certain real or perceived risk of a pure cloud implementation,” Dixon says. “The need for an on-premises security blanket is likely the number one driver of hybrid cloud strategy in the state, local and education space. Governments have many of the same technical and business requirements to balance on- and off-premises computing as would any other organization. But governments have much more fragmented accountability, which leads to lots of turf conflict.”

Choosing which resources to keep on-premises and which to send into a public cloud depends on what the agency and its constituents want and need. Dixon says the most successful government IT organizations always recognize that every decision has a political component.

“Focus on incremental introduction of the cloud, gradually reducing the concerns of skittish elected officials and key stakeholders in client agencies,” he advises.

“We seriously evaluate options based on how the experience will be received by our customers,” Auburn’s Buston says. “We look at speed. Is it oversubscribed in the cloud so that our customers experience long waits in trying to do business with us? Is the cloud system reliable? How is that reliability maintained by the vendor? Only after we are comfortable with all of the issues as they relate to the customer experience do we consider it.”

The state of Ohio was an early adopter of the hybrid cloud, building its IT transformation strategy around it. The state’s journey started in 2010, when officials began consolidating Ohio’s 30 data centers into one private cloud as part of a larger IT transformation strategy. At the same time, the state migrated applications into the public cloud, using the cloud for more than a dozen programs, including productivity software and help desk tasks.

The impetus for the move to a hybrid strategy was threefold, says Spencer Wood, chief operations officer and the deputy state CIO for Ohio.

“It was a pretty easy decision for us because we were able to bundle everything together, drive our costs down and at the same time hopefully improve our security overall,” he says. “Just enough governance, just enough management, just enough cost savings. It really is kind of like Goldilocks. We don’t want the porridge to be too hot. We don’t want it to be too cold. We want it to be right there in the middle.”

In the city of San Francisco, officials focus on a private cloud for infrastructure and putting applications, whenever possible, into a private cloud, says Miguel Gamiño Jr., the city’s CIO and the executive director of the Department of Technology.

“We’re constantly re-evaluating how much we really need to have on-­premises. I think prioritizing things that we can move to Software or Platform as a Service and taking advantage of cloud-delivered infrastructure, or workloads that we can spin up from one or multiple vendors, works best for us.”

Gamiño has established detailed criteria around the decision of what to move. Agility and elasticity are at the top of the list, he says, as is the impact a cloud move would have on the organization’s infrastructure needs and ­challenges.

“We’re trying to adopt applications and platforms first, because then the infrastructure requirements are no longer our problem,” Gamiño says.