Delta Diablo, a wastewater resource recovery agency serving nearly 200,000 people across several ­communities in Northern California, is world class at what it does.

The agency has been recognized several times with the Platinum Peak Performance Award, given by the National Association of Clean Water Agencies to only about 1 percent of wastewater treatment operations nationwide.

Delta Diablo frequently partners with other public and private stake­holders on initiatives, such as an effort to harness energy from biosolids. But until recently, the agency’s data center was holding back such endeavors.

“Our IT department is never 100 percent sure what’s coming down the pike in the next year,” says Chris Hanna, IT manager for Delta Diablo. “We could sign a contract with an energy company for research and development, and we have to be ready for that.”

The agency’s infrastructure — 5-year-old physical servers, 10-year-old routers and switches and 5-year-old storage appliances — was aging out. Hanna wanted to replace it all at once, giving the organization the ability to build a solution that would ensure flexibility and hardware compatibility.

To make his case, Hanna didn’t simply tell the agency’s management team that the existing hardware was old. Instead, he highlighted the tangible benefits of a refresh, assigning dollar figures where possible, to show that the return on investment would justify the initial expense.

“Requesting less money is easier than requesting more money,” Hanna says. “A total refresh was something that had to be justified. Our management team is very supportive. That said, they still needed to be convinced that this was worth the investment.”

Starting last fall, Delta Diablo began deploying a new, highly virtualized data center that includes Cisco Systems UCS 240 servers, Cisco Catalyst 4500-X Series switches and Nimble CS235 storage arrays. In his pitch for the upgrade, Hanna highlighted three chief benefits: It would speed up time to market for IT services; it would dramatically increase continuity of operations, minimizing the labor costs and missed opportunities associated with outages; and it would reduce power needs by approximately 80 percent, helping to pay off “a large chunk” of the hardware costs, Hanna says.

“We have very big plans for this agency,” he explains. “The fact that we’ve built out this infrastructure allows us to get services to market faster. When initiatives must be done quickly, we don’t have to worry about beefing up our infrastructure. We’re ready.” 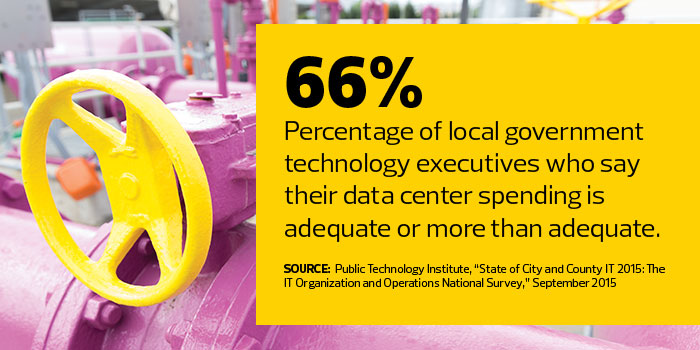 Kelly Quinn, research manager for the Datacenter Trends and Strategies group within IDC, says that data center upgrades can present an opportunity for improved power and cooling savings as well as improvements such as increased availability and reduced latency.

While energy costs are easy to quantify, IT managers have to do more legwork to attach a dollar figure to other factors. By estimating how much it will cost if mission-critical resources go down or how much more productive an organization can be with lower latency, Quinn says, tech administrators can boost their business cases with hard financial data.

“If you can say, ‘We’re going to save X amount of dollars over three years if we deploy this solution,’ as long as a finance manager sees that number, he or she is probably going to be swayed by it,” Quinn says. “The more you can quantify, the better off you are in your argument.”

When Matthew Arvay became CIO for Virginia Beach, Va., several years ago, he saw that the data center there needed to be modernized and simplified. The city was using four different storage systems, experiencing occasional outages and spending hundreds of thousands of dollars and countless man-hours maintaining its hardware.

“We needed to reduce the complexity of the environment,” Arvay says. “Vblock is expected to provide benefits to Virginia Beach in terms of modernizing our data center, enhancing lifecycle management, enabling self-service provisioning and improving reliability, scalability and uptime.”

The upgrade, which is still in progress, will reduce the city’s physical data center footprint from 29 racks down to four, resulting in tens of thousands of dollars in energy savings. Not only is the new hardware more reliable than the city’s legacy systems, Arvay says, but simplifying the environment will reduce third-party maintenance costs by hundreds of thousands of dollars and will also dramatically reduce the amount of time staff spends on maintenance.

Once Vblock is fully implemented, it’s anticipated the city will save $675,184 annually in maintenance, labor, and power and cooling costs, while avoiding the expense of a $1.2 million upgrade of legacy storage systems. Arvay expects a payback in just under four years and a five-year return on ­investment of 25.2 percent.

The Value of Security

Sally Ward, director of the data center services program for the Texas Department of Information Resources, asks her agency’s customers to refresh 20 percent of the data center hardware each year, creating an environment in which all components are newer than 5 years old. While upgrades are expensive, she notes, a successful cyberattack could cost even more. While the business case for improved security may be obvious to IT professionals, Ward says that others within an agency often need convincing.

“They’re going to say, ‘What’s the level of risk? Is it really going to happen?’ ” she says. “Those are the types of conversations that you get into, until an attack hits an agency, and they lose an application and have to start over.”

Ward likens agencies that fail to invest in upgrades to homeowners who put off maintenance projects. “Had you stopped it in the beginning, before the roof was leaking, you probably could have done it more cheaply,” she says. “Over time, you get to a place where you can’t afford the repairs. It’s too much.”

Strategize and Plan
Determine what cost savings and energy efficiencies the upgrade can achieve (while taking into account effects on other parts of IT infrastructure) and present a business case based on those metrics.

Design  the Solution
Decide on the number, location and configuration of data centers,  as well as whether data centers should  be colocated or outsourced. Develop a cloud computing strategy.

Select the Technology
Use research to guide the selection and implementation  of technologies, products and services that will lead to energy efficiency gains, increased agility and better availability.

Build the Solution
Build out infrastructure using an incremental methodology, focusing on design efficiency and immediate needs over long-term growth. Factor in density zones and strive for optimal costs.