The plan also calls for the renovation of 31 subway stations, which will be outfitted with amenities like countdown clocks, improved cellular connectivity and Wi-Fi.

All of the MTA’s 278 stations are likely to have wireless connectivity soon, and the subway line even quietly tested out in-train Wi-Fi in June; the connection proved to be spotty during that dry run, however, and was only available on a handful of cars on a single subway line.

“We’re installing cellular everywhere in the stations,” says Richard Barone, vice president for transportation at the Regional Plan Association, a think tank that works to improve prosperity, infrastructure, sustainability and quality of life in the New York-New Jersey-Connecticut metropolitan region. “Those are going to be wired relatively soon. The tunnels are the next thing. There’s no schedule for that, but I think there’s going to be pressure once the stations are wired to fill in the gaps. The next thing will be the quality of the connection – how quick is it, how reliable is it?”

In an era when mobile users can get connected wirelessly from virtually anywhere they happen to be – from coffee shops to airports to hotel rooms – it can feel archaic for riders when their train goes underground and their device suddenly stops connecting.

“Especially with the generation that’s moving in, having that connectivity is more important,” says Barone.

To be fair, not everyone will be excited about extending the hustle and bustle that comes with people constantly updating Facebook newsfeeds and Twitter timelines. Some riders might prefer that their fellow straphangers can’t use their phones to talk or stream loud music in stations or on the train, he says.

“If you have cellular connectivity, people get phone calls at the station, and they start yapping on the train with their outside voice,” Barone says. However, for most riders, he thinks that the benefits of being connected likely outweigh the drawbacks.

Providing wireless connectivity to riders on public transit vehicles is a growing trend, but most riders around the world are still without it. The London Underground, for example, provides riders with Wi-Fi at 250 stations, but connectivity isn’t available in tunnels or between stations.

Across the U.S., a number of transit agencies are offering wireless connectivity to their riders, although there is little standardization among what sorts of connections are offered and how they are made available. For example, Metro Transit, which serves the Minneapolis/St. Paul area, is testing Wi-Fi on select buses, allowing riders to check email and surf the web, but not allowing them to stream digital content. The Boston-area MBTA offers free Wi-Fi on its commuter trains, but not on its subway lines.

Smaller transit agencies are jumping on board too. The Northern Indiana Commuter Transportation District tried for years to offer wireless connectivity through commercial partnerships, but the business case simply wasn’t there; instead, the train line paid to have cellular routers installed in some cars and is contracting with AT&T for 4G connectivity. Transit agencies in San Antonio, Salt Lake City and Santa Clara, Calif. are all offering bus or train passengers some form of wireless connectivity.

While passenger Wi-Fi is a notable convenience, it alone doesn’t support a transit agency’s central mission of getting people where they need to go. However, IT does have a major role to play in making public transit smarter and more efficient.

Wireless connections can help to power back-end solutions like security cameras and digital signage. The New York City MTA, like many other transit agencies, is working to support mobile ticketing on its subway lines (mobile ticketing, in fact, is already available on MTA commuter lines like the Metro North and Long Island Rail Road). When rider data can be integrated with back-end solutions, agencies can find new ways to get people where they need to go faster than ever.

“The big deal is the convergence of these two things – the back-end infrastructure and the front-end systems for the customers – and putting it all together to have an experience that’s more tailored,” Barone says.

As an example, Barone mentions subway trains that have to skip stops to get back on schedule. Currently, there’s no way for train operators to know which skipped stops will cause the most (or least) inconvenience for passengers. But if the MTA’s IT systems could gather ride-history data from passenger devices, they could then tell a train operator not to skip a stop where a large number of riders were planning to depart.

Driverless trains with fully-automated systems that incorporate rider data in this manner are likely decades away. But Barone says he doesn’t think “we’re that far away” from the MTA being able to use this sort of data to help drivers make better-informed decisions.

“It’s bringing together that ability to provide customers with information, and then use their information to better serve them,” he says. “It’s completing that loop. That’s the exciting next step in this thinking.” 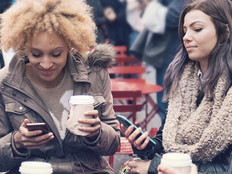