How do you make your city a leader in the 21st century ­economy? Ensure that all ­residents have a fast internet ­connection and the freedom to innovate.

That’s the reasoning behind New York City’s $10 million initiative to bring high-speed internet to the city’s poorest citizens, starting with those who reside at Queensbridge North and South, which together make up the largest public housing development in the nation.

All told, Queensbridge houses more than 6,500 residents, spreading over six city blocks in the borough of Queens. Before the end of 2017, each of the 3,147 households in the complex will have access to a 25-megabit-per-second Wi-Fi connection, absolutely free of charge.

“New York has a number of commercial fiber providers, but they’re all focused on lower Manhattan,” he says. “With the city providing them thousands of anchor tenants, it creates an opportunity to get that infrastructure to the other boroughs.”

“We think of Queensbridge as a center of excellence, one we can use to start building the totally connected city we are aiming for,” he adds.

While New York may be the biggest major metropolitan area to wire public housing, it’s hardly the only one. The city is among 28 pilot communities nationwide participating in ConnectHome, a public-private ­partnership launched in July 2015 by the U.S. Department of Housing and Urban Development (HUD).

“High-speed internet access is essential to connect Americans to opportunity in the 21st century, but many Americans of modest means remain on the wrong side of the digital divide,” he says.

Although projects like ConnectHome make steady progress toward closing that divide, they’re only one piece of the puzzle. 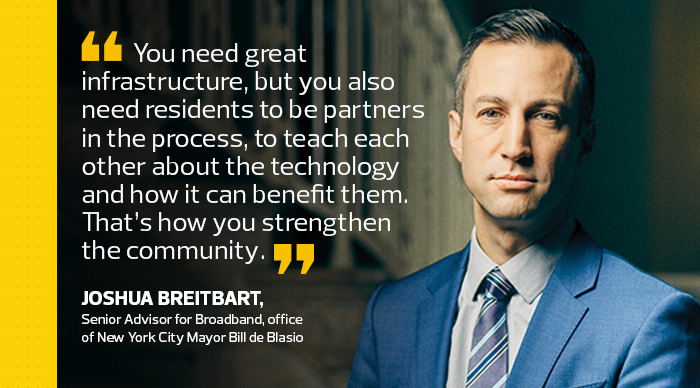 While many public housing residents own smartphones, notebooks and gaming consoles, those devices are far from universal. Different communities have come up with creative solutions to bridge the gadget gap, ensuring broadband-access programs don’t prove futile.

The city of Austin, for instance, works with Austin Community College to refurbish recycled machines and distribute them to residents who have completed a certain number of digital literacy classes, says Catherine Crago, head of strategic initiatives and resource development for HACA; the city also supplies devices to individuals who assist other residents with their digital needs.

In these and other Google Fiber cities, Google also provides lab space and “access lounges,” where residents can ask questions and get up to speed on the technology, Merlo says.

With Wi-Fi Connectivity Comes a Need for Resident Trust

Although internet access and device availability represent major challenges, resident distrust is the first hurdle that many cities must tackle in closing the digital divide.

“We have a landlord-tenant relationship with these families, which can be challenging,” says Kelvin Patterson, IT administrator for Kansas City’s housing authority. “In many cases, they thought we were trying to spy on them by putting boxes in their homes. We had to get them all involved and build different relationships with them.”

“People tend to think of broadband as a technical process, but it’s also a social process,” he says. “You need great infrastructure, but you also need residents to be partners in the process, to teach each other about the technology and how it can benefit them. That’s how you strengthen the community.”

In connected communities, low-income children can complete schoolwork at home, rather than in school libraries, says HUD’s Onishi. High school students can fill out college applications, adults can go back to school or apply for jobs, and seniors can stay in touch with their families. Eventually, public housing residents can emerge from poverty and become self-sufficient, Onishi adds.

“We knew there was a problem with these families not having internet access, but it was more than that — the internet is a way of life,” Kansas City’s Patterson says. “If people don’t have that, it’s almost like air: Without it, life comes to a stop.”