The Colorado State Capitol in Denver.

Colorado is nearing the end of a major transformation. The state is a few months away from completing the second phase of the modernization of the Colorado Benefits Management System, which has managed more than 2 million cases.

The state partnered closely with Salesforce to enhance the CBMS and move it to the cloud, which will make it easier to navigate for the state and local agency officials who use it. It will also save a significant amount in costs, according to Colorado CTO David McCurdy.

Speaking alongside Hassan Wehbe, senior program architect at Salesforce, at the NASCIO Midyear 2019 conference in National Harbor, Md., McCurdy noted that Colorado has been working with Salesforce for a decade and currently has 98 applications hosted through Salesforce.

The relationship between the state’s Office of Information Technology and Salesforce evolved over time, beginning with small and medium-sized applications, such as an app that tracked dangerous dogs in the state, McCurdy said. Eventually, the state’s trust in Salesforce increased into a “pretty stable partnership.” 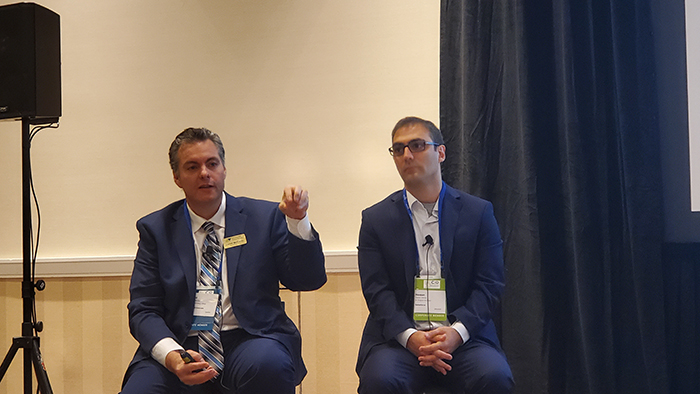 Then, two years ago, Colorado undertook a major modernization of the CBMS, which manages everything from Medicaid benefits to the Temporary Assistance for Needy Families program, food assistance and how residents access benefits.

“It’s one of the largest apps in the state,” McCurdy said.

Maintaining the legacy CBMS application was “a drag” and was inefficient, Wehbe said. Colorado wanted to streamline the operations and the cost and move it into a modern architecture.

Along with middleware cloud services from Oracle and Amazon Web Services, Salesforce was able to modernize the app to simplify the cost of maintenance, Wehbe said. The legacy app had about 5.4 million lines of code. The modernized app has 670,000, a 78 percent reduction. Fully 3 million lines of code were migrated to Salesforce’s platform, according to Wehbe.

Colorado could see that it had “a pretty significant cost coming our way” if it did not modernize, because the hardware that ran the CBMS was 5 to 10 years old and needed to be replaced. The state had also converted old COBOL code to Java-based JOBOL, but was uncertain about how long it wanted to maintain it.

So the state started to think: Where can we have strategic investment to move that forward? How can agencies and OIT focus more on outcomes than IT?

Finally, this summer, the state will fully cut over to the new cloud-based system. “It affects an immense amount of the state’s population,” McCurdy said.

Colorado is pleased to be where it is right now, but it did not get there overnight. “It took us 10 years to get that trust,” McCurdy said.