Last fall, Maryland Gov. Martin O'Malley attended an event to raise awareness of domestic violence. His social media team took to Twitter to get the word out.

"We got this message saying, 'Governor, I've been a victim of domestic violence and I don't know what to do,' " says Zoe Pagonis, O'Malley's communications and new media manager. The team direct-messaged her through Twitter and then connected her with available resources. Pagonis says that encounter is a perfect example of why state and local governments should have an active presence on social media platforms such as Facebook, Twitter and YouTube. Agencies ranging from police departments to fish and game are launching social media accounts. To learn what works and what doesn't, read on for their best practices.

"Government agencies usually look at social media as an end rather than a means," says Andrea Di Maio, vice president and distinguished analyst at Gartner Research. "From a communications perspective, social media is just another tool for outreach, like more traditional channels of engagement — city council meetings, e-mail and other electronic channels used in the past, such as discussion boards."

Di Maio says most government agencies' first instincts are to recreate their web pages on social media platforms. However, an agency's social media presence should be more granular and dynamic, focused on a narrow target audience that may have a common purpose for following and engaging with the agency.

Of course, being an active participant in social media beyond a government's own online presence requires thought, policy-planning and trust. "In order for external engagement to work, government employees need to be able to engage in external conversations," Di Maio says. That means determining how those conversations fit into social media policies.

Michigan operates 137 different social media accounts across Facebook, Twitter and YouTube. When a state agency wants to launch a new one, it coordinates with a board headed by Social Communications Specialist Nicole Sunstrum. "They have to explain how this method of social media communication will offer additional value to citizens," Sunstrum says.

The state's year-old social media policy helps guide agencies through the process of determining goals, evaluating content strategy and spelling out what is expected from them, such as how quickly they must respond to social media requests (24 business hours) and proper branding for official accounts. 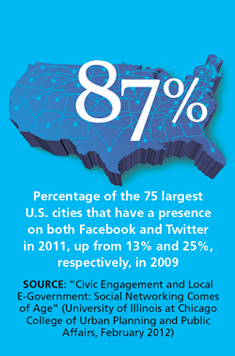 Sunstrum and her team also offer guidelines for crafting engaging, 140-character tweets; making Facebook Timelines visual; and using scheduling features to ensure social media pages are never inactive. If the board and the agency determine a stand-alone social media presence isn't warranted, the agency may be invited to provide content under the state's main MI.gov social media accounts.

Some state and local governments are just starting out. In Gilbert, Ariz., Chief Digital Officer Dana Berchman has been on the job for four months. The town manager brought her in not just to launch a social media strategy, but to transform the way government communicates with the public across social ­media, mobile applications, video production, a redesigned website and a digital newsroom.

"It's important to establish sound policies and then commit staff and resources to administering the social media pages — responding to citizens, updating information, giving the pages daily attention," she says. "Also, social media correspondence is public record, so it's important to maintain records for all your social media channels and monitor activity on all the pages."

There are ways that local governments can have a social media presence without committing resources they may not have. San Bernardino, Calif., which filed for bankruptcy protection in July, saw the value of having a presence on social media but could not invest resources into constantly monitoring its social media accounts and engaging in two-way communications. Moreover, leaders were concerned about opening up San Bernardino's platforms to libelous or inappropriate comments from the public.

Lea Deesing, IT director for San Bernadino, said city officials decided to limit comments on its Facebook pages and to monitor its Twitter feeds, but not to respond to citizens over the social network. To enable the one-way social media communication, Deesing deployed RSS software that pulls fresh content from the city's content management system and publishes it on Facebook, Twitter and YouTube.

"Personally, I love social media," Deesing says, "but this was a policy decision. People say, 'How dare government shut down public comment?' But sometimes you get into a gray area, and we decided — at least in the beginning — to limit it."

This turned out to be easier said than done. "Facebook, for instance, lets you prevent direct posts on your wall, but you can't quickly and easily disable comments for posts that you make," Deesing explains. Instead, Facebook has a moderator's blocklist feature that will hide comments that include certain words. Deesing added the top 2,000 dictionary words to the city's Facebook blocklist. "It's not perfect, but it works," she says.

In Maryland, Zoe Pagonis enjoys the freedom to try new things on social media. In support of the governor's top priority, creating and preserving jobs, she oversaw the state's first Maryland ­Pinterest Business Pitch Contest for entre­preneurs and small business owners. Participants used Pinterest to pitch their business ideas using 10 images "pinned" to an online board. She will experiment with Google+ Hangouts for a virtual meeting with the governor, and recently held a Tweetup at the State House.

"The governor invited 25 people from Twitter to talk about the things that matter to them, bringing the online conversation back to the real world," Pagonis explains. At the same time, everyone involved was tweeting throughout the meeting, effectively sharing the event with the social media world at large.

Pagonis says she'll further pursue social media initiatives that work. Those that don't, she may not repeat, but there's value in having tried. "We will always use whatever combination of all the platforms gives us the best ability to communicate with the public," says Pagonis. "Our former chief innovation officer taught me, 'If you're going to fail, fail quickly.' That means figuring out what the best path moving forward is without distracting from your ultimate mission. For us, for example, that mission involves getting that victim of domestic violence the resources she needs."