Software-defined networking (SDN) promises to do for routers and switches what virtualization has done for servers: create a dynamic IT resource that can automatically deliver functionality whenever and wherever it's needed. SDN technology reduces network costs and boosts agility by placing some network functionality on virtual machines, rather than on network hardware.

"Software-defined networking is really interesting," says Peter Christy, principal for the Internet Research Group. "The problem is that implementing SDN is complicated, and there aren't yet enough reasons for enterprise networks to justify such a disruptive technology." 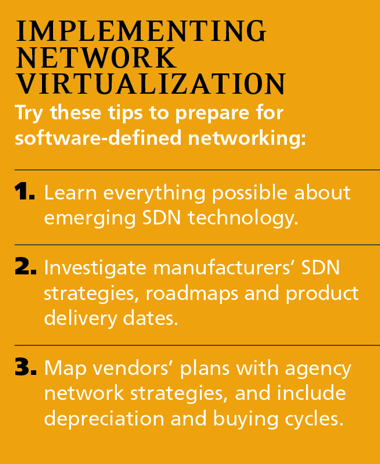 A Switch in Thinking

SDN decouples the data (forwarding) plane from the control plane so IT administrators can centrally manage, monitor and program a pool of devices.

There are several approaches to SDN, but the OpenFlow and virtual switch methods seem to be attracting the most attention. The Open Networking Foundation, a nonprofit consortium of manufacturers and user companies (including, among others, Brocade, Cisco Systems, Deutsche Telekom, Google, Goldman Sachs and Microsoft), developed the OpenFlow protocol. OpenFlow enables a remote controller to modify the behavior of network devices through a forwarding instruction set.

Keith Stewart, senior director of product management at Brocade, says programmable networking offers IT departments the same kind of flexibility they've achieved via server virtualization. "You'll have better use of assets, better network utilization, and you won't have to buy as much gear," he says.

VMware is working with service providers and very large enterprises such as eBay to generate network efficiencies. "Over time, network virtualization will move down, and we'll start seeing its use in midsize and smaller enterprises," says Rod Stuhlmuller, a Nicira veteran and product marketing manager for VMware's networking business unit.

In the past, eBay would spend about seven weeks bringing up switches, routers, firewalls, security and other network services. "With network virtualization, they can do this in 30 seconds," says Stuhlmuller. "They've removed the friction that's involved for a developer or test engineer to build out network infrastructure and test new applications."

State and local agencies should keep an eye on the services SDNs can deliver. "The real benefit will be in providing services like load balancing or controlling firewalls," says Bob Laliberte, senior analyst for Enterprise Strategy Group. "Imagine a time when a firewall and an application delivery controller could move with a virtual machine, via a policy, whenever that virtual machine moves."