For Fairfax County Fire and Rescue, technology-assisted training used to involve two or three firefighters huddled around a desktop computer. But that all changed last December when the Virginia force equipped all 37 of its stations with projectors and whiteboards, making it possible for large groups to participate in interactive, multimedia training sessions.

"The projector brings more people together, gives them more interactive and graphic elements, and allows our training to be more discussion-based," says Capt. William Vannoy, who managed the projector deployment for the department. "The technology helps us tap into the collective experience that all the members of a shift have and gives them an opportunity to pass on the information they have gathered through the years."

Government agencies such as Fairfax County Fire and Rescue are turning to classroom technologies to augment or replace more traditional training models with the goals of boosting interactivity, expanding the reach of training initiatives and reducing costs.

Training needs should dictate the choice of technology, says Carnes. The coolest tool may not be the best one for the task at hand. She also stresses that preparation and follow-up are as essential to technology-supported training as they are to any other model.

"Too often, the emphasis is on using technology to get the training out there and checking the box that says it's been done," says Carnes. "For technology-supported learning to be effective, the emphasis has to be on how well the technology helps accomplish a learning goal. Organizations should take their time and find the right strategy and the right tools." 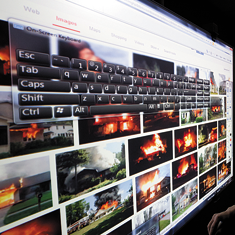 37% Percentage of formal hours of training that is technology-based

SOURCE: 2012 State of the Industry Report (American Society for Training and Development, November 2012)

The projectors accept input from a variety of sources, including PCs, tablets, document cameras and Blu-ray players. The BrightLink 475Wi's interactive pens allow users to annotate presentations from any source. Because the projectors are connected to the organization's network, the department can now present audio-visual training sessions to multiple stations simultaneously, Vannoy says. While nothing will replace hands-on training for firefighters, he says, the system can deliver critical content, such as GIS layer maps that show access to hydrants and reveal unique structural elements of buildings in the department's coverage area.

"This technology gives us the opportunity to improve our pre-event planning and training, before an emergency actually occurs," says Vannoy. The group can use the projector to walk through scenarios for different types of buildings, for example, to build a team dynamic and promote independent thinking. "We're getting tremendous buy-in for this training from the field, and firefighters can be a pretty tough crowd."

Trainers connect their notebooks to Polycom hardware to record and synchronize supporting visual materials with the streaming video of their presentations. Sessions are published to RealPresence Media Manager Software and made available through a searchable online portal.

Classes were previously difficult to schedule because firefighters had to assemble in a single location, says James Campbell, division chief of education and safety. "Now they have options. Firefighters can watch classes live or go through the portal whenever their schedules permit," he says. "[Streaming video] makes it easier to reach everyone in the force more quickly with new information."

"At this point, I can't imagine running a fire department without a system like this."

Since the capture and management system was deployed in 2006, the Pike Township Fire Department has used it to deliver training materials from the state as well as the content the department generates. Now the department is working with the state to roll out the system as a training platform for other fire departments across Indiana.

"At this point, I can't imagine running a fire department without a system like this," says Campbell. "Besides training classes, we use it to announce administrative and policy changes. The potential for the technology to improve the way we train and communicate seems absolutely unlimited."

Of course, local governments face ­budget limitations. But a younger workforce expects to use technology to learn new skills, leaving agencies scrambling for low- and no-cost training technology strategies, says Peter Blank, training manager for the Personnel Board of Jefferson County, Ala.

"The young people we work with these days are used to using technology in all aspects of their lives, and we have to keep moving to keep up," Blank says. "We're using a lot of the most inexpensive technology tools we can find."

To boost interactivity, the board taps a free Internet-based audience response system that participants can access with their smartphones, says Blank. His organization uses the system to poll the audience on issues or to capture feedback via texts.

"These kinds of tools allow us to stay as close to the cutting edge as we can with our limited budget," says Blank. "Of course, I'm looking forward to the day when we do have the money to invest in interactive whiteboards and the other great learning technology that's out there."

While classroom technologies such as projectors, whiteboards and video conferencing make for interactive learning, sometimes there's no substitute for hands-on training.

That's why fire and rescue teams occasionally conduct live-burn training in old homes slated for demolition. These exercises give firefighters an excellent opportunity to experience fire and smoke behavior in a controlled environment.

In March, the Cobb County Fire Department conducted training in an abandoned home in Acworth, Ga. "We have buildings built for training, but they don't offer the unexpected situations that arise from fighting a fire in a real house," Cobb County Fire and Emergency Services' Capt. Marshall Conner told the Marietta Daily Journal.

Last December, a 14,000-square-foot Nebraska mansion once owned by former Buffalo Bills star Rod Kush was burned to the ground by the Gretna Volunteer Fire Department for practice.