Your boss is running late to work and has to postpone a meeting. Your calendar tells your alarm clock to give you 15 extra minutes of sleep. Your car waits an extra 15 minutes to warm itself up and your GPS reroutes your path to work based on traffic conditions. Welcome to the Internet of Things.

Also known as IoT, the Internet of Things is a term that describes a world of Internet-connected devices and people. It’s not happening in the future; it’s already here, although its full impact hasn’t yet been felt. Soon, connected objects will be part of our daily lives, and everyone from city planners to farmers will be invested in objects that collect data and communicate via technologies like Wi-Fi and RFID.

Here’s a closer look at how the Internet of Things is developing and what it could look like in the future.

What Is the Internet of Things?

The definition of the Internet of Things, according to Cisco (PDF download), is “the point in time when more ‘things or objects’ were connected to the Internet than people.” This happened in 2008 — and the world will never be the same. 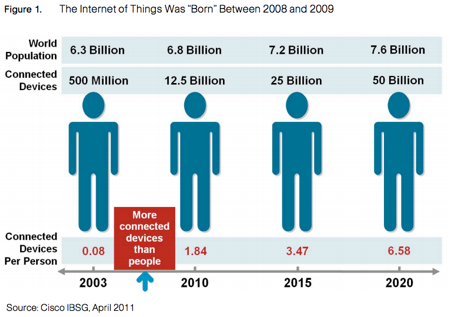 Currently, various networks — from cars to HVAC systems — connect groups of objects with very limited ability to communicate. A thermostat, for example, measures air temperature and signals a heating or cooling system to activate. It’s a closed network that can’t share data or communicate with a lighting system, a car, a toaster, a traffic light, a sewage system or a farm animal. It never needed to in the past, but it might be what the future has in store.

It’s important to understand that nearly every object on earth generates data. Anything that can be measured — temperature, pressure, speed, weight, mass, length, height, width, frequency, etc. — is a potential data point. 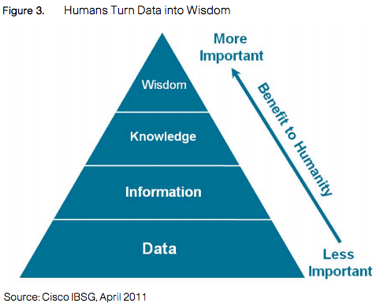 Right now, the huge majority of that data isn’t collected. Over time, more objects will be connected to the Internet, collecting data and sharing it with various sources. As the chart to the right illustrates, data will become the basis of wisdom, allowing humans (or computers) to make smarter, more efficient choices about everything from public transit to food production. Dave Evans explains in this white paper:

From bottom to top, the pyramid layers include data, information, knowledge, and wisdom. Data is the raw material that is processed into information. Individual data by itself is not very useful, but volumes of it can identify trends and patterns. This and other sources of information come together to form knowledge. In the simplest sense, knowledge is information of which someone is aware. Wisdom is then born from knowledge plus experience. While knowledge changes over time, wisdom is timeless, and it all begins with the acquisition of data.

As the data grows and can be measured against other sets of data, it will become more valuable. What technologists understand to be Big Data today will be minuscule in just a few years.

The Internet of Things can connect just about any object to the Internet. Any object means, quite literally, any object. Here are a few examples of systems that are already harvesting data and reaping benefits.

The Internet of Cars: Public transit is one area that could benefit greatly from IoT, especially as driverless cars become more common. One day, cars will communicate with traffic lights to ease congestion and with one another to avoid accidents:

The U.S. Department of Transportation (DoT) is conducting a program on vehicle safety in Ann Arbor, Michigan. The Connected Vehicle Safety Pilot Model Deployment Program will monitor about 3,000 vehicles hitting the road in the world’s biggest ever real world test of connected-vehicle communication technology.

“Vehicle-to-vehicle communication has the potential to be the ultimate game-changer in roadway safety – but we need to understand how to apply the technology in an effective way in the real world,” said NHTSA Administrator David Strickland. “NHTSA will use the valuable data from the ‘model deployment’ as it decides if and when these connected vehicle safety technologies should be incorporated into the fleet.”

The Internet of Pork: IBM is working with slaughterhouses in the Shandong Province of China to collect data about pigs. Initially, the company hopes to cut down on contamination, but the infrastructure will help IBM collect data for many more purposes in the future:

Pigs are marked with ear tags containing unique barcodes, those same barcodes appear on the bins that carry their meat during processing, and on the packages for the pork placed in stores. In the near term, IBM hopes that knowing the history of every piece of meat will enable fast and super accurate recalls in case of contamination. Eventually, this kind of comprehensive tracking could help farmers keep pigs healthier, improve the quality of meat after it is cut, and even place a picture on the store package of the exact pig made into that pork product.

Consumers might not appreciate a photo of the animal they are about to eat, but this data could eventually help cut down on food contamination and improve living conditions for the pigs. Consumers could have access to data about the slaughterhouse, the temperature the meat has been stored at, and the time it took to reach the grocery store.

The Internet of You: People create more data than just about any object on the planet. Increasingly, people are turning to devices like Fitbits to capture that data, but hospitals, like this one in France, are taking it to the next level (PDF download):

A common indicator of a heart treatment failure is that the patient starts to retain salt and water and gains weight. This correlation is so strong that if a patient’s weight is monitored regularly any weight gain can provide a crucial warning signal, enabling medical professionals to take action.

The solution was to network a weighing scale using a wireless module that would collect and transfer data back to the coordination unit.

The pilot project began in September 2011 and so far 315 patients have been monitored. Cardiauvergne has responded to over 600 alarms, with responses ranging from calling the patient to organising emergency hospitalisation. “This has averted 600 health crises and, in critical cases, helped us save lives,” said Professor Jean Cassagnes, cardiologist and medical director at Cardiauvergne.

Who Is Regulating It?

Proprietary barriers are a huge problem for consumers and a major concern for the next generation of software and hardware manufacturers. For example, if a Mac user downloads a movie in iTunes, it can’t be watched on an Android device. This is an inconvenience, and IoT companies will experience this frustration on a much larger scale. In order for the Internet of Things to be useful, data will have to open and APIs will have to be available. Without an open platform and regulated standards, the data will never reach its potential value:

University research centers, businesses, government agencies such as the National Institute for Standards and Technology, and industry organizations like the Institute of Electrical and Electronics Engineers (IEEE) are all working to create standards for the wireless technologies, data types and application processing interfaces that make M2M communication possible. Once standards are in place, developers will be able to build APIs based on a single model (a sort of common language for M2M communication), but plenty of work remains. Purdue University's M2M Lab has created a model called HARMS that identifies the components that need to interface in an M2M network: humans, software agents, robots, machines and sensors, says Eric Matson, an assistant professor and researcher in the M2M Lab.

Check out the infographic below for more examples of how the Internet of Things is being implemented today.