Governments amass vast quantities of data but face challenges to extract value from it. Big Data as a concept refers to the volume, velocity and variety of information. Today, potent processors, ample storage and analytics software make it possible for states and localities to mine data for patterns and apply those findings to uncover fraud, gain efficiencies and improve public safety. In short, Big Data has the power to make the world a better place.

Given the scarcity of public-sector resources, agencies must ensure that aid goes to those most in need. Combing through records with powerful analytical tools enables governments to root out waste, fraud and abuse. For example, the North Carolina Department of Health and Human Services has identified $191 million in suspicious Medicaid healthcare claims since 2010 using IBM software, which zeroes in on billing behavior patterns that don't fit the norm and then examines relationships among providers to connect the dots.

Officials have put tax cheats on notice too, thanks to advancements in data analytics. For instance, Florida's Miami-Dade County uncovered $5 million in improper homestead exemptions on property taxes. Such back taxes and penalties go a long way toward filling public coffers.

The ability to dive deeper into data also can help optimize operations. Many cities and states already track a number of key statistics to benchmark performance and make those dashboards available to the public as a transparent indicator of how governments are achieving their goals — and where they're falling short. But that's only the beginning. Having machines sift through ever-growing volumes of data affords more informed decision-making and program prioritization. 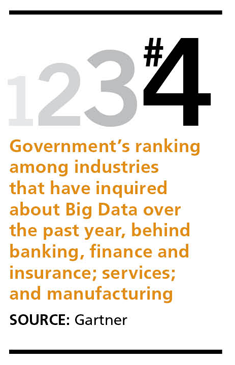 Big Data's potential benefits even extend to quality-of-life improvements. Technology can help tame traffic, for example, leading to safer, more efficient transportation. Analytics also can aid road planners in pinpointing intersections that have a disproportionate number of accidents and determine where to expand or build new roadways.

Creative leveraging of such information also can make our communities safer and healthier. For instance, Memphis, Tenn., reduced crime by tapping IBM predictive analytics to place police patrols where and when they're most needed. Officials in Louisville, Ky., meanwhile, have distributed inhalers outfitted with sensors to local asthma sufferers to develop a better understanding of the respiratory disorder.

Despite the many opportunities Big Data affords, government is still grappling with how to define and take advantage of it.

According to the 2012 NASCIO report Advancing the C4 Agenda, 35 percent of state CIOs have addressed Big Data in their strategic plans; yet 59 percent say they're only discussing it or have no plans to add it.

Even if agencies don't yet have a strategy, they should at least begin evaluating tools and platforms for potential implementation in the future. Organizations also will need staff who possess the advanced skills required to make the most of this emerging technology.

Industry observers point to a shortage of data scientists. That gap will only worsen unless government, education and the private sector prioritize computational manipulation and analytical and statistical skills training for their workers.

With the right preparation, Big Data can usher in a bright future for us all.