It seems logical that one day in the future the entire world will have access to high-speed, wireless Internet. The technology needed to make that happen, however, is incredibly complicated. Think of the network infrastructure in your office and then multiply that by a factor of several billion.

The impetus to move forward on global access is centered on the idea that Internet access is a civil right, as opposed to a privilege meant only for those who can afford it. In theory, it’s a noble cause; but how realistic is the infrastructure needed to make it happen? And perhaps more importantly, who is going to fund the ubiquitous web?

Enter Outernet. This project, which is funded by the nonprofit Media Development Investment Fund, is building a network of small satellites that will be able to broadcast data to any phone with SMS capabilities and will also make data available to smartphones via mobile apps. It’s important to note that Outernet will be broadcast-only in the beginning, and users will be able to consume content but not transmit their own data. 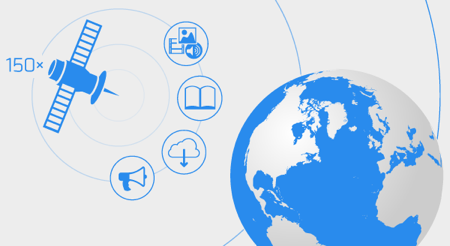 PSFK expands on the technology involved:

Powered by UDP-based multicasting over WiFi, the entire constellation is able to meet the global usage demand by communicating directly with consumer handsets and tables. Ground stations process and transmit data to each satellite, which loops content in a continuous cycle until new ones are received.

This WiFi-based global media delivery platform will stay current with web content. It will also offer a humanitarian notification system for emergencies and a two-way Internet-access for individuals and organizations during times of natural disasters or when information is blocked by man-made restrictions.

One might ask what content will be delivered over this network. The Outernet website says that international and local news will be available, but it doesn’t mention sources. That could certainly cause some controversy, depending on who is chosen as the project’s partners. In addition to news, users will have access to educational sites like Coursera and Khan Academy, as well as Wikipedia, OpenStreetMap, emergency notifications and the Ubuntu operating system.

A Loony Idea for a Floating Network Infrastructure

Google can steer its balloons using wind in the Earth's stratosphere.

Interestingly, Outernet isn’t the only project of its kind. Google’s Project Loon is exploring the possibility of using hot air balloons to provide Internet access across enormous areas. As Google notes on the project’s website, “Two-thirds of the world’s population does not yet have Internet access.” In other words, what many of us think of as a global community is just a sampling of the world’s population:

Project Loon balloons float in the stratosphere, twice as high as airplanes and the weather. They are carried around the Earth by winds and they can be steered by rising or descending to an altitude with winds moving in the desired direction. People connect to the balloon network using a special Internet antenna attached to their building. The signal bounces from balloon to balloon, then to the global Internet back on Earth.

Each balloon can provide connectivity to a ground area about 40 km in diameter at speeds comparable to 3G. For balloon-to-balloon and balloon-to-ground communications, the balloons use antennas equipped with specialized radio frequency technology. Project Loon currently uses ISM bands (specifically 2.4 and 5.8 GHz bands) that are available for anyone to use.

Check out the video below to learn more about how it works and see the balloons in action.