For South Carolina’s traffic engineers and maintenance staff, nothing is more frustrating than a slow Internet connection; for the state’s motorists, nothing is more maddening than sitting at a long red light when no cars are coming through an intersection. South Carolina’s Department of Transportation has begun resolving those issues by upgrading its traffic signal systems from dial-up Internet connections to broadband.

Carol Jones, traffic signal and systems engineer for SCDOT, says, “We want to reduce delays during peak commute hours and reduce people’s travel times, which then contributes to a reduction in emissions.”

The project, which includes installing network switches and pan-tilt-zoom traffic cameras at intersections, provides SCDOT staffers with real-time video and access to more traffic signal applications and data than ever before. When stoplights go dark or get out of sync, staffers can quickly connect and remotely troubleshoot. And when traffic patterns on roads change over time, they can adjust preprogrammed signal timing to improve traffic flow.

Transitioning to IP networks also allows the state to install and support new adaptive signal control technology along priority corridors to analyze traffic and automatically adjust signal timing in real time to help ease congestion. “The ultimate benefit is that we are squeezing every bit of capacity on the roadways,” says Jones.

The Rise of Smart Cities

The SCDOT effort demonstrates the growing smart-cities movement, in which communities use technology to enhance citizen services, such as improving traffic management, increasing energy efficiency and reducing crime.

According to the World Health Organization, half of the world’s population lives in urban areas today. By 2030, six in 10 people will live in cities. IBM researchers predict that in five years, cities will adapt to growing populations by using mobile applications, sensors, crowdsourcing and data analytics to better respond to citizens’ needs. Some forward-thinking cities, counties and state governments are already laying the groundwork for smart communities.

“Cities are reinventing themselves,” says Alan R. Shark, executive director of the Public Technology Institute. “With resources becoming more scarce than ever, and with a growing population, they have to utilize resources better, and technology can play a huge role in that.”

Managing Traffic on a Grand Scale

South Carolina standardized on Cisco Systems’ Industrial Ethernet 2000 Series and 3000 Series switches to connect the traffic signals to the fiber network. The switches are rugged and can handle harsh environmental conditions, such as extreme temperatures, says Tom Booth, director of consulting for GTS Solutions, a technology consulting company SCDOT hired to design and integrate the technology. 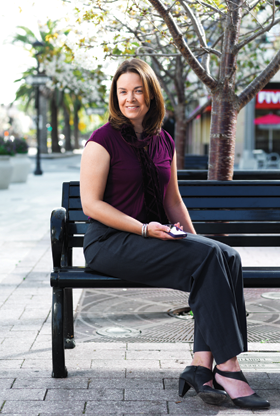 “Instead of having to hunt for parking, this app tells people where parking spaces are available,” says Jessica Manzi, Redwood City’s senior transportation coordinator.

The agency is also strategically deploying Cisco Catalyst 3850 and 6500 Series switches in SCDOT buildings across the state. The switches act as central hubs that aggregate network traffic from individual stoplights and deliver it to SCDOT’s data center. South Carolina centralized its traffic signal applications and databases in a virtualized server environment in the data center, which improves business continuity and the data backup process, Jones says. In the past, each of SCDOT’s seven district offices managed their own applications and databases that housed traffic signal configurations, but there was no uniform backup method.

Today, about 90 percent of the state’s stoplights are preprogrammed based on time of day. The other stoplights use responsive technology, where sensors on the ground detect traffic flow and change signal times, but not immediately. The signals have to cycle through two or three times, which can take up to 10 minutes, Jones says. With new adaptive technology, “if vehicles in one direction need more green-light time, there’s no time lag,” she explains.

So far, three adaptive signal control systems have been installed. A fourth one is in the works and others are expected to be installed this fall, Jones says. Because the technology is still expensive, SCDOT is targeting areas that have the most traffic, such as tourist locations, arterial roads near interstates and hurricane evacuation routes.

“We have to prioritize installation to where it’s most beneficial,” she says.

Redwood City, Calif., has a charming downtown area filled with restaurants, retail stores, and movie and performing arts theaters. But as in any urban area, parking can be a challenge. To make it easier to find parking, the city has installed smart-parking technology that allows drivers to check a smartphone app for real-time availability of downtown parking spaces on the street and at two municipal garages.

“We’re doing this because we want to show our businesses that we support them,” she says. “Instead of having to hunt for parking, this app tells people where parking spaces are available.”

Last summer, the city partnered with a vendor to test the technology on 100 parking spaces on downtown streets. Wireless sensors embedded under each parking space detect whether the space is open or filled. That information is then transmitted via a wireless network to the vendor’s servers and then relayed to the smartphone app in real time, Manzi says.

When a construction project temporarily eliminated 250 parking spaces in the area last year, the city expanded the technology into two downtown parking garages to help people find parking. The garages have existing gate and loop detector systems at entries and exits that keep count of the number of cars parked in the garages. Instead of installing sensors, the vendor pulls data from those systems, allowing app users to quickly see how many parking spaces are still available, she says.

New Communities with Tech at the Forefront

Not many areas can build a community from scratch. But Lake Nona, a 7,000-acre development in Orlando, Fla., is doing just that with smart technology throughout. With the help of Cisco, the master planned community has built a network infrastructure that provides fiber and unified communications capabilities into every home, school and business.

The developer has built a distributed antenna system to improve cellular phone service and is working with Cisco to install Wi-Fi in public spaces, says Michael Voll, vice president of Dais Holdings, the technology solutions provider for Lake Nona.

Elsewhere, city leaders and residents of Dubuque, Iowa, take pride in their sustainability efforts. During the past four years, the city has partnered with IBM to pilot smart-city projects aimed at reducing water and energy usage, improving public transportation and increasing recycling.

In 2012, the city ran a smart-­transportation pilot, which analyzed public transportation usage trends to create better bus schedules and routes for the city’s commuters.

Dubuque is also in the midst of a recycling pilot, measuring how much residents are recycling. More recently, with IBM’s water pilot project completed, the city has begun making real-time water usage information available online to all customers through software from the city’s water meter vendor.

“The goal is to leverage data, so we can make more effective and better decisions, and ultimately, serve our citizens better and improve their quality of life,” Kohlmann says.