The primary responsibility for public safety rests with local government, but limited resources can make that a difficult job. And it can be even tougher when substantial regional growth adds to the challenge.

That's why Missouri City, Texas, launched a new technology-enabled, motorcycle traffic-control unit. Located along major arteries southwest of Houston's burgeoning metropolis, Missouri City recently saw a 50 percent increase in traffic accidents. But thanks to an innovative approach to traffic enforcement, the city now fulfills its safety goals more efficiently and more effectively than ever — an important consideration for a municipality that prides itself on being one of the safest cities in Texas.

"Our specially equipped motorcycles provide a combination of maneuverability and technology that enables us to do a much better job of enforcing laws, investigating accidents and educating the driving public," says Officer Robert Lawson. "That's vitally important when you've got tens of thousands of vehicles passing through your jurisdiction every day and you're trying to be proactive about ensuring everyone's safety."

Prior to the use of the new motorcycles, traffic stops could take at least 30 minutes.

Officers had to call in the stop, speak to the driver, return to their vehicle and use the radio to obtain the necessary information about the driver, manually complete a ticket if necessary, and then engage the driver again.

Now, officers receive all the data they need right on their Toughpads without calling headquarters. They can also automatically populate traffic tickets with the necessary data and immediately relay ticket data back to headquarters to be fed into the court system's workflow. 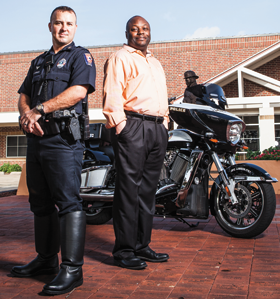 While the planning, implementation and training for its motorcycle unit spanned several years, Missouri City began realizing benefits from the initiative within weeks. Now, thanks to the new unit:

Above and beyond these benefits, Lawson says that being freed from the mechanics of a traffic stop allows him and his fellow officers to focus on making interactions with motorists more productive. "The point of a stop isn't just to issue a ticket. It's to educate people and help them behave more safely on the road," he explains. "With the way our new equipment allows us to operate, people actually express appreciation for the work we're doing."

The Norwalk (Conn.) Police Department has experienced similar benefits by equipping its Harley-Davidson motorcycles in much the same manner. Chief Thomas Kulhawik says that in addition to helping officers perform their jobs, mobile enablement improves their collective efficacy.

"If one officer gives a motorist a warning, the next officer who stops that same motorist should know about it," Kulhawik says. "Because we capture every interaction digitally, we can now share that kind of information in real time."

Other municipalities also use the combination of motorcycles and mobile computing to maintain traffic safety. The Topeka Police Department in Kansas, for example, has issued head-mounted cameras to its motorcycle- and bicycle-mounted officers, reducing costs by about $3,800 per unit while improving documentation of incidents. And in Aurora, Colo., motorcycle officers now use specialized handheld devices to scan driver's license data on the spot.

"Data capture and analytics will give law enforcement agencies unprecedented insight into the times and places specific types of violations tend to occur, as well as differences in the performance of individual officers," Gunderson says. "This will empower them to be smarter about how they deploy and educate their personnel."

Sedrick Cole, director of technology and innovation for Missouri City, Texas, has three suggestions for outfitting motorcycles or squad cars with mobile devices: