The federal government is a catalyst for bringing broadband Internet to rural areas of the country, but some of the major players involved may surprise you.

An article in The Washington Post details how the U.S. Department of Agriculture (USDA) gives loans to Internet providers in small farming communities so these rural areas can acquire high-speed Internet access.

“[D]espite its lower profile on broadband, the USDA, along with other federal agencies such as the Department of Housing and Urban Development, are taking on a bigger role in expanding Internet access. Like consumers, federal officials are increasingly aware that the Web is a basic necessity: for folks in the so-called gig economy, for schoolchildren, for low-income Americans who can't afford a PC and, yes, even for farmers.”

The article highlights La Valle, a town of 1,300 in southwest Wisconsin.

“La Valle, like many rural communities in America, have been passed over by the country's major communications providers, leaving the small town to fend for itself. And it has done so tremendously: Residents can buy fiber-optic Internet from the customer-owned LaValle Telephone Cooperative at speeds of up to 60 megabits per second — fast enough to rival the connections many Americans enjoy elsewhere.”

The USDA announced on Monday that it will give telecom providers for 12 communities around the nation, including La Valle, $85.8 million, via loans and grants, to expand broadband in their areas. The reason is simple, says Agriculture Secretary Tom Vilsack: Bringing broadband to rural areas spurs job creation and fuels the economy.

On the surface, the USDA may seem like an odd provider, but when you dig deeper into the department, it begins to make sense. Because of its mission, the agency features an office in almost every county in America. It is one of the few agencies that touch every part of the nation, even some of the country’s most sparsely populated areas.

According to USDA, since 2009 it has awarded 74 Community Connect grants to bring broadband to rural areas that lacked this vital service. The grants include nearly $20 million to provide broadband service in tribal areas and communities of Alaskan Natives.

For its part, HUD is making a similar push. As The Washington Post reports:

That seemingly random agencies are becoming increasingly involved in Internet access is a reflection of how unevenly broadband access is distributed in the United States. Although the Internet is a fact of life for the young and affluent, a persistent gap in adoption remains among the poor, elderly and uneducated. 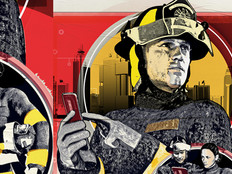