While the mission of supporting veterans hasn’t changed, the way that state and local government agencies communicate and engage with veterans and their families has.

As part of its mission and purpose to support veterans with timely, accurate information, the New York State Division of Veterans’ Affairs (DVA) turned to the state’s IT department, the New York State Office of Information Technology Services (ITS) to develop and launch its first mobile app.

The need for a mobile app was identified through a survey the DVA conducted with ITS, says Todd Rosenfield, a project manager for the veterans agency.

This need was driven in part by the increasing number of post-9/11 veterans, as well as the need to reach out and connect with the family members of veterans. While many veterans themselves are more than 60 years old, their children and grandchildren aren’t.

“A lot of the time, it’s family members and friends who encourage veterans to get benefits and services,” says Shannon MacColl, public information officer at the New York State Division of Veterans’ Affairs. “If we can get them on board, chances are much higher for us to get the veterans on board and get the benefits and claims they deserve and need.”

In particular, by empowering friends and family members with a mobile app, the agency hopes to intervene to ensure veterans get all of the benefits they’re entitled to.

“One of the big challenges we have is that a lot of post-9/11 veterans are self-filers,” says MacColl. “We’re basically trying to make sure we put ourselves in the space to have the veteran reach out to us first before they file themselves.”

Another motivating factor for going with a mobile app is the urgency and location awareness that comes with an app experience.

“The website is static. With us, if there is a new rule or law that went into effect, we can now put out a push notification and alert our users,” says Rosenfield. “We also felt the app would be good because it would have GPS on it, so you could find the office near you instead of going to search.”

Once the need for the mobile app was confirmed, it was time to think about how the build of the app would be accomplished. 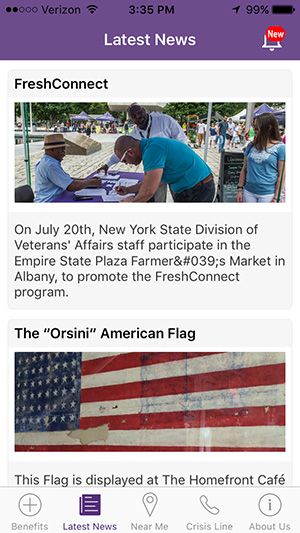 New York’s ITS has a small in-house mobile team within the Enterprise Business Solutions cluster that supports the development and maintenance of apps for the state.

“The EBS team is really savvy from a technology perspective, so they can do these things quickly. That resource is applied across the whole state,” says Mahesh Nattanmai, executive deputy CIO at NYS ITS. “They have a pipeline of different apps that cuts across the whole agency.”

The request for custom, native mobile app development is increasing across many internal agencies within the state, says Nattanmai. ITS is currently in the fifth year of its massive IT centralization and consolidation initiative. Thanks to this reorganization, the state is in a position to develop apps in house. Before the IT centralization, a smaller agency like DVA wouldn’t necessarily have had the resources to build its own app in house, he says.

“Prior to the IT consolidation, the skills and abilities of the agency were related to how much funding it had,” says Nattanmai. “A smaller agency like DVA wouldn’t have had the resources in house to do it because they’re not a big IT shop. Today, it doesn’t matter if you’re a small agency or a large agency, we look at IT as a state now, not as a single agency.”

From the DVA’s perspective, having a partner in ITS has allowed them to focus on their mission as a state agency.

“The New York State Veterans mobile app is a great demonstration of collaboration between state agencies. The mobile app helps us to reach and assist our Veterans,” says DVA Director Eric J. Hesse. “ITS was a proactive partner who took an idea and refined it into a finished product in a short period of time. Our goal as an agency is to leverage technology and other means to find new ways to reach veterans, military members and their families.”

Developing a Mobile App with Internal and External Value

To date, there are 4,100 downloads of the app on iOS and Android, says Nattanmai. The development process took about three to four months from start to finish. While an app that merely wrapped the website in an applike experience could have been produced more quickly, it was important that the app be built natively for both iOS and Android to allow the DVA to take full advantage of the mobile experience, he says.

But that doesn’t mean ITS didn’t think about the need to ensure information on the site and the app remained in sync and wasn’t tedious for DVA to update.

“The cool thing about this app is that it dips into the same content repository that the DVA website uses,” says Nattanmai. “That way, we avoid synchronization issues where someone views something on the website that’s different from the app.”

It’s something DVA views as an essential element of maintaining and updating the app experience.

One unexpected source of feedback has come from other agencies within the state, which provide DVA with suggestions and opportunities to update information.

“If anything, the app has become a second set of eyes and ears. We actually had an office listing that wasn’t updated for a while because it was information from another agency,” says Rosenfield. “We’re finding other agencies are bringing us information and providing feedback as well.”

For the foreseeable future, DVA is focused on spreading the word about the app to the veterans’ community through digital and social channels. It’s also in regular communication with ITS about adding updates to the app to improve or add functionality. The ability to do push notifications wasn’t available at launch, but was added later, for example. Potential updates may include enhancements with geofencing, he says.

And with positive feedback from veterans — including one who mentioned attending an outreach event based on a push notification from the app — the DVA is eager to push forward.

“We will continue to develop this and other technologies, and know that the great folks in the state ITS office will be there to help us make it a reality,” says Hesse.