While public school districts, assisted by E-rate, are bringing better internet to students in the classroom each day, the question has become: How do you reach students that can’t make it to the classroom?

This was the issue facing San Francisco, where gang lines, unreliable internet connections and undesirable learning conditions were keeping high school dropouts from community centers or other places where they could study up to earn their GED diplomas.

Determined to reach students in high-crime areas, the nonprofit Five Keys, a network of learning centers and charter schools in the Bay Area founded by the San Francisco Sheriff’s Department, partnered with Google and the San Francisco Municipal Transportation Agency to launch a teched-out bus that drives into high-poverty neighborhoods to bring the classroom to student learners wherever they are, EdSurge reports.

The bus officially launched on July 29, about two years after the Five Keys team first conceptualized a mobile classroom as a way to address their concerns about the community center where their students were learning.

“It was literally the last place you’d want to learn in,” Five Keys Executive Director Steve Good tells EdSurge of the community center where student learners in the San Francisco neighborhood previously took classes. “There were puddles on the ground, students playing video games, paint peeling. So one day someone said, ‘What if we had a bus we could drive up and kids could go to school on a bus instead?’”

Thanks to a $100,000 investment from Google and a bus donate by SFMTA, the mobile classroom is fitted with Wi-Fi and laptops for the student learners. With one teacher and a teaching aide who will double as a bus driver, the bus will serve up to 60 students a day — 15 at a time — learning four separate classes at different levels.

While it takes significant capital investment to get the bus up and running, Good and the Five Keys team are optimistic about the program, partially because they have seen success from similar initiatives in the past, particularly the organization’s county jail charter school program launched in 2003.

The Five Keys program currently serves 5,000 students a day, including 3,000 students in county jails and the rest in community learning centers. Bringing GED-focused classes to adult learners in their own neighborhoods seems to be working — while the state’s recidivism rate sits at 68 percent, just 28 percent of Five Keys students end up back in jail, Edsurge reports.

Going forward, with help from the city and Google, Good hopes to expand the program to different areas of the state and, eventually, the country.

“Honestly, that two blocks or half-mile (to school) — that’s a huge distance for some of our clients, some of our students,” Good tells the San Francisco Chronicle. “The whole idea is to remove as many barriers as we can.”

But, with an estimated 5 million students unable to access internet at home, buses are becoming a great way to deliver Wi-Fi to students while in transit. Moreover, this is not the first bus-driven public learning program to hit the country — or even San Francisco. In 2015, the San Francisco Public Library launched its TechMobile, which ventures into high-crime and high-poverty areas of the city, bringing with it Wi-Fi, a computer lab, programming and engineering courses, and even 3D printers, Slate reports.

In Florida, a former teacher named Estella Pyfrom launched her own version of a mobile classroom called the Brilliant Bus, packed full of computers that help bring learning technology and courses to learners of all ages in the state’s most underserved areas.

“This is not just a bus. It’s a movement,” she tells Slate.

In Laurinburg, N.C., the school district this summer launched its STEAM3 Mobile Classroom, an RV converted into a classroom that looks to provide students with a project-based science, technology, engineering, arts, mathematics, medicine and manufacturing education, The Laurinburg Exchange reports. The mobile classroom, which can fit 15 to 18 elementary school children, is fitted with tablets, an interactive TV and more.

“All economic indicators point to exponential growth in STEAM related careers over the next 20 years — with an increase of over 1 million jobs in the next five years,” Scotland County Schools Superintendent Ron Hargrave tells the source. “We are doing our students a disservice if we don’t start preparing them now for the world and workforce they will face when they graduate. We believe that their future, and truly our future, is worth the investment now.”

So why are these mobile classrooms taking off? Partially because the technology exists to make reliable, mobile Wi-Fi possible, but also because states and school districts have hope that the roving classrooms can help to effectively close digital divides in the U.S. school system.

“We believe that everyone — and we mean everyone, especially those behind the eight ball, so to speak — deserves a dignified, effective and free education,” Sunny Schwartz, co-founder of Five Keys, tells the San Francisco Chronicle of the program in San Francisco. “They’re our students. They’re our community.” 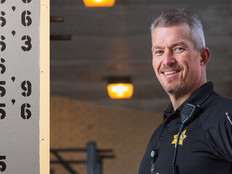