The inmates had trouble using the computer, and that lack of technical knowledge led to lower scores. That deficiency in technology acumen was a portent of what awaited them: Many of the jobs that inmates seek upon their release require at least some degree of familiarity with technology.

State and local governments are finding that education plays a significant role in reducing recidivism in state and county prison populations.

Increasingly, technology also plays a role in encouraging prisoners to complete their educational goals and adhere to their mental health or substance abuse counseling programs. Beyond those primary goals, technology has also become integral to helping inmates cope upon their release, earn technical certifications and learn new skills that will help them become better qualified for jobs.

In 2015, when a group called Mountain Comprehensive Care Center took over the jail’s Substance Abuse Program (SAP), the organization suggested bringing tablets into the jail. Blue jumped at the chance.

“When I talked to inmates, some of them had never seen a smartphone, because they’d been locked up,” Blue says. “If you’re locked up for three to five years, when you come out, technology has surpassed you. A lot of the employment applications require a computer, and some inmates have never dealt with a computer.”

Historically, correctional institutions have been slow to adopt technology for inmate-focused programs, because of funding constraints and concerns about security. But, like Hopkins County, a number of jails and prisons nationwide are deciding that the benefits of educational technology outweigh the drawbacks.

“Technology is where we’re going to have to go,” says Morris Dews, acting executive director of the Correctional Education Association. “It’s difficult, because there has to be a different way of thinking. The technology is there. It just has to be adapted to what we do.”

Bringing tablets into the jail offered a way to “show inmates something a ­little bit ­different from what they came in with,” Blue says. “I can’t force anybody to go to a program, but no one can say, ‘I didn’t have an opportunity to learn anything at the Hopkins County Jail.’ ” 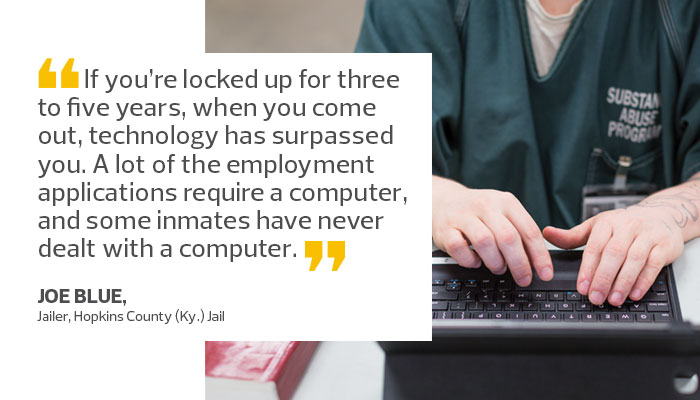 The jail deployed nearly 50 Samsung Galaxy Tab A series tablets as part of the SAP program, maintained in a mobile charging cart and protected with ruggedized ZAGG keyboard cases.

David Walls, who operates the program through Mountain Comprehensive Care Center, says that the tablets are proving valuable in supporting the program’s substance abuse curriculum, as well as in the delivery of more general content. For example, inmates who have trouble reading might use the tablets to access an audio version of the Alcoholics Anonymous 1939 renowned recovery manual, known as the “Big Book.” They might also use the devices to work their way through phonics software to improve their literacy skills.

Walls is hoping to give exiting inmates thumb drives that contain electronic copies of their resumes, as well as any technical or academic certificates they’ve earned in jail.

“The purpose is to give them tools to reintegrate into society with a different mindset,” Walls says. “One of the big frustrations these guys come into is trying to fit into the marketplace with a criminal background. If they can learn about technology and how it works, that gives them a leg up.”

At the Madera County Jail in California, 165 Samsung Galaxy Tab 4 tablets, coupled with software from Edovo, support a range of programming: Inmates have access to auto repair courses, TED Talks, anger management classes, math instruction and more. Jail logs from this past September showed that inmates used the tablets for more than 1,050 hours.

“Those are minutes when these ­individuals are being productive instead of just sitting in their cells,” points out Sgt. Christopher Rodriguez. “It’s been really positive.”

When they were first deployed, Rodriguez says he worried about inmates using the tablets as weapons, but the devices have actually improved behavior.

“We haven’t had any altercations in any units that have tablets” since the initiative kicked off, Rodriguez says. “They don’t want to ruin their program, because they look forward to it. Everywhere we’ve placed the tablets, we see a calmer demeanor from the inmates.”

For the past seven years in Wyoming, five adult state prisons have incorporated interactive whiteboards in instructional efforts. The technology makes lessons more participatory and vibrant, proponents say, and prisoners have even used the boards to create a game called “Are You Smarter Than an Inmate?”

The state is also exploring tablets as a way to expand instructional offerings for inmates — particularly those in solitary confinement, says Betty Abbott, correctional education programs manager for Wyoming.

“With inmates in segregation, it’s very hard to reach them when your staff is limited,” Abbott says. “For 100 tablets, it costs less than what it costs for a staff member. We can get a lot more programming out to a lot more inmates than we could if we had one person walking from cell to cell.” 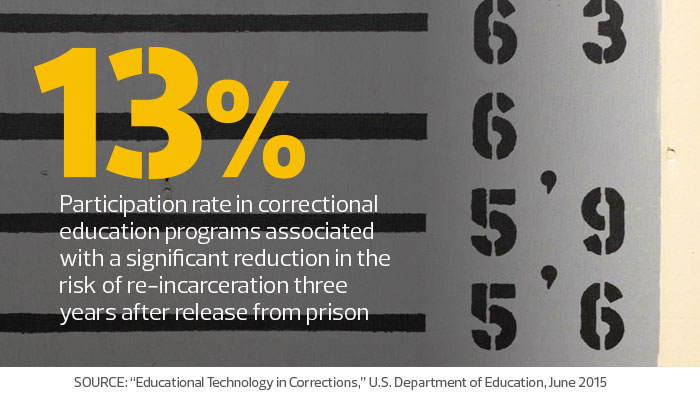 For many correctional administrators, the prospect of equipping inmates with mobile devices causes legitimate concerns about security; however, mobile device management (MDM) solutions allow facilities to easily restrict access to external sites. In a whitelisting model, inmates can only access a handful of preselected online resources, such as specific educational websites and legal support.

MDM tools also allow jail and prison staff to monitor usage, so if an inmate somehow finds a way to access Facebook or Twitter, correctional administrators will know. A number of institutions only allow the tablets and other devices to be used while in a classroom setting, eliminating opportunities for inmates to privately tinker with the devices and search for vulnerabilities. For Hopkins County, the security risks weren’t enough to justify rejecting a technology that might help inmates achieve better outcomes upon release, Blue says.

“If they can control and monitor internet access on tablets in a high school, then we should be able to do it in a jail.”