Designed for smaller but growing branch offices, the Brocade ICX 7150-48PF switch is the high-end model of the ICX line, designed purposely to fit into branch and remote offices, or government campuslike environments where several organizations might maintain offices and smaller networks separate from a main headquarters.

The 48PF offers 48 Gigabit Ethernet ports for attaching devices, and seamlessly integrates with a smaller ICX switch and almost every other piece of existing networking hardware in the lab. Installing the switch was a quick process thanks to the integration of the Link Layer Discovery Protocol (LLDP) and ANSI/TIA-1057 Link Layer Discovery Protocol-Media Endpoint Discovery (LLDP-MED) ­standards. Basic Layer-3 functions like static routing activated immediately, and I used LLDP-MED to rapidly configure Quality of Service priorities, set up ­virtual local area networks, tweak ­security ­policies and set the Power over Ethernet (PoE) levels.

The ICX 7150-48PF offers 180 gigbits per second total switching capacity at full duplex and 134 million packets per second (Mpps) of forwarding capacity. It could support 16,384 MAC addresses and the creation of 4,095 VLANs. I tested the throughput with a traffic avalanche and reflector device and it never strained, even as it approached maximum capacity. Not only can the ICX 7150-48PF route traffic to network devices, it can also power them. It’s rare to find a switch at this price point that fully supports PoE on all 48 ports, including the higher PoE+ standard with its larger 30-watt capacity on half of them.

I plugged in several PoE devices and all of them received maximum operating power. The ICX 7150-48PF has dedicated ports for stacking other ICX switches, including lower-end models in the same line. Up to eight can be stacked together, with each one combining its capacity with the group. Once stacked, the Brocade Network Advisor software makes it look like a single switch. We tied my 48PF in with a tiny ICX 7150-24 switch and managed them as one unit. That would allow any state or local branch office to start small and grow, as often as its needs changed. 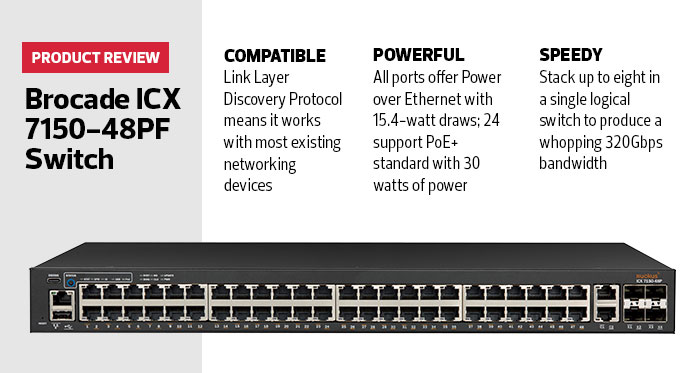 I was fortunate to have obtained a smaller ICX 7150-24 model switch in addition to the Brocade ICX 7150-48PF network switch tested for this review. I tested how they could be stacked directly together, but what about campus environments spread out over some distance? Perhaps a tiny state DMV outpost needs to expand into a full-service, multibuilding division as the community it serves grows? Or what if other state and local agencies (think libraries or courts) want to locate nearby? In the past, that meant either the expensive proposition of having each agency maintain their own networks, or trying to manage a complicated mesh of multi-tiered communication devices, which require a team of dedicated support specialists to accomplish even simple tasks.

Brocade eliminates those less desirable outcomes with its Brocade Campus Fabric technology, available on ICX switches. When the new switch was added to the network, it immediately grabbed the latest software updates to ensure the entire network ran under the same fabric. After that, my modest two switches seemed to collapse down into a single device, much like when they were directly changed. In the Campus Fabric Environment, we could also create management domains, allowing each agency to maintain its own policies and security settings while still sharing hardware, bandwidth and network expenses.

In our case, the entry-level switch and the more robust 48PF worked together, including sharing Layer 2 and 3 services even though they were positioned about 100 feet apart and not directly chained. The campus technology works over a 10-kilometer area, so there is a lot of space to spread out if needed.

Whether supporting a single local agency, a growing government division, or even a large campus environment, the Brocade ICX 7150-48PF network switch, and the entire ICX line, is up to the challenge.