In July 2013, Detroit was in trouble: High unemployment, a shrinking tax base and crippling pension liabilities brought this city of 700,000 to its knees. Citing more than $18 billion in debt, Detroit became the largest U.S. municipality to file for Chapter 9 ­bankruptcy protection.

Eighteen months later, the city emerged from bankruptcy; last April, it was released from state financial oversight. While debt restructuring and belt tightening were essential to the city’s recovery, a major tech overhaul also played a key role.

When cities suffer rough times economically, their IT infrastructure often takes a tough hit, early. Technology moves quickly, and citizens expect experiences from their government that mirror their preferences as consumers. But there’s no surer sign that a city’s budget has rebounded than evidence of robust IT services capable of meeting the demands of civic leaders and residents alike. Once a city recovers, it can quickly meet the needs of its inhabitants and employees through technology upgrades.

While Detroit is the largest U.S. city to declare bankruptcy, it’s hardly the only one. Eight other city or county governments have filed for bankruptcy since 2010, including Stockton, Calif., and Harrisburg, Pa. Others, like Atlantic City, N.J., and Providence, R.I., spent years teetering on the brink.

When Beth Niblock took over as Detroit CIO in February 2014, she inherited an infrastructure in need of refreshing.

“The infrastructure hadn’t had a lot of investments due to the declining revenues of the city,” Niblock says. “Most of our computer fleet were on Windows XP or older, which we couldn’t patch. There were various versions of Office, so how old your Office version was determined whether you could open email attachments. The network wasn’t as robust as it needed to be. Everything was just 10 or 12 years older than it should have been.” 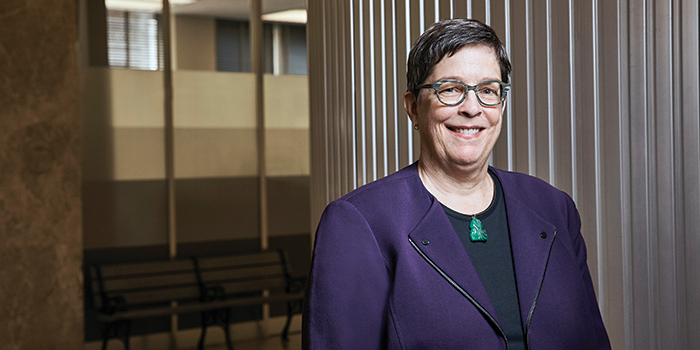 When Beth Niblock took over as Detroit CIO in February 2014, she inherited an infrastructure that hadn’t been refreshed for almost a dozen years. Photography by Matthew LaVere.

The first change she made was to move from Novell Directory Services to Windows Active Directory. IT replaced all 5,500 desktops with HP machines and Microsoft Surface Pros, and signed a licensing agreement with Microsoft to put everyone on the same version of Office. They upgraded the network switches and extended Wi-Fi to all city-owned buildings in Detroit’s government center.

Detroit adopted a cloud-based Oracle enterprise resource planning system to manage its budgeting and procurement, and it continues to shift payroll and the city’s buildings and permits system to the cloud, Niblock says.

Citizen-facing technology also received a boost. A mobile 311 app, Improve Detroit, allows citizens to notify city departments about issues that need to be resolved. The city has introduced parking and transit apps, and upgraded its website to be more mobile-friendly and accept online payments. It has also deployed payment kiosks in a variety of locations, so people who want to pay their water or utility bills in cash can do so in their neighborhood instead of driving to city hall.

Funding for IT Offers Detroit a Way Forward

A bankruptcy court approved $90 million for Detroit to rebuild its crumbling infrastructure, including $29 million for a new enterprise resource planning system and $25 million to replace aging Windows desktops, software and networking. At the time, the city had three major technology needs, says Kevin Hand, a managing director for financial advisory firm Conway MacKenzie, which specializes in helping distressed organizations emerge from bankruptcy and which acted as a consultant for Detroit.

“The first was making sure the city had current information systems they could access efficiently using the people they had,” he says. “The second was operational — specialty systems needed by each department to do its job. The last piece was things that would make it easier for people who lived in the city to interact with government and get the services they needed.”

Applied correctly, the right technology can help to cut operating costs and gain efficiencies, says Christiana McFarland, research director for the National League of Cities. It can also be essential to restoring faith in gov­ern­ment.

“A lot of that relies on transparency,” says McFarland. “Technology plays a key role in enhancing that. They need to respond to community needs and challenges in real time, and show how well the city is progressing on the key goals that have been established.”

Five years ago, Providence, R.I., faced a $110 million structural deficit, what then-Mayor Angel Taveras called a “Category 5 fiscal hurricane.” The capital has posted surpluses over the past two years. Modernizing technology to increase efficiency has been a significant part of Providence’s recovery, says Emmanuel Echevarria, chief innovation and performance officer.

“We’re starting to rely more on technology to help us do financial forecasts, so we know where to find efficiencies and where we need to balance our budget,” Echevarria says. “We’re also looking at how to map all our technology systems and integrate them better, to reduce the administrative burden on our staff, cut costs and improve quality of services.”

For example, digitizing the city’s permit and license procedures made it much easier for companies to do business in Providence, he says.

“A few years ago, we had one system to apply for a permit, another to review permits, and a third one for reviewing land use records,” Echevarria says.

“When someone wanted to start a development project, they had to go to three different places. Now all records go through our e-permitting system. Whether you want to put an addition on your home or build a skyscraper, you apply for all your permits through our cloud site.”

Technology slashed the cost of ­processing permits by about 70 percent and shortened processing times, reducing the backlog of permits awaiting approval, Echevarria says. It worked so well, the city extended the same technology to streamline how it grants business licenses. Now, instead of filing up to 50 pieces of paper to qualify for a license, citizens need to fill out just three online forms.

The IT Division of Stockton, Calif., oversees the City Wide Technology Strategic Plan, which provides guidance for Stockton’s technology objectives. The city began ­implementing the plan once it emerged from bankruptcy in February 2015.

After bankruptcy, the city government shrank while the population continued to grow. While roughly 307,000 people reside in Stockton now, the city shed 43 percent of its employees outside of public safety, says City Manager Kurt Wilson.

“With a smaller workforce serving what is now a growing population, we turned to technology to re-engineer our processes,” Wilson says. “With financial constraints, I cannot go out and hire another thousand people tomorrow. But we still have to deliver services, and technology has been very helpful in that area citywide.”

A revitalized building permitting process makes the case for Wilson. A high volume of permits created backlogs as staff struggled to maintain legacy applications. Homeowners began to avoid seeking permits for construction (a source of revenue for the city) because the process took too long.

New software brought new life to the process, and permit revenues began to aid in recovery. To facilitate the transition, Stockton installed a cloud-based civic engagement system. The city also will soon implement a new ERP system, through a competitive request for proposals, to help it manage its finances and human resources, Wilson says.

“Our pre-bankruptcy concept of IT was very territorial and focused on the shiny bells and whistles,” Wilson says. “We finally let that go with the realization that maybe we don’t need to own everything. We can put more services in the cloud. When we made that switch, it was a big deal, and we finally caught up to the rest of the world.”