For as long as I have been an IT professional, VMware Workstation has been the flagship product for testing and developing infrastructure on a local system before trying deployments in production.

More than 10 years ago, I built my first Microsoft Windows Server 2008 cluster with SQL Server 2005, carefully documenting each step. With VMware Workstation, it is easy to create virtual networks, so I even had all the networks for the cluster heartbeat mapped out.

While much has changed over a decade later, VMware Workstation Pro is still the gold standard. VMware Workstation 15 Pro, released in September, is the latest in a series of virtualization products that allow IT professionals to run multiple, isolated operating systems on a single workstation. Users can network together sets of operating systems to complete the testing and development of code or of network or server architecture, all on a single desktop computer.

How big can these virtual machines get? Monster-sized! Massive virtual machines may span up to 16 virtual CPUs, with 64 gigabytes of RAM and 8 terabytes of virtual hard disks. Graphic-intensive applications get an additional boost through the allocation of 3GB of available host video memory directly to a virtual machine. The Workstation 15 Pro supports incredibly high 4K resolution (3840x2160 pixels) on desktops and QHD+ (3200x1800 pixels) on laptops and x86 tablets, all with DirectX 10.1 support. Virtual machines may even span multiple monitors. 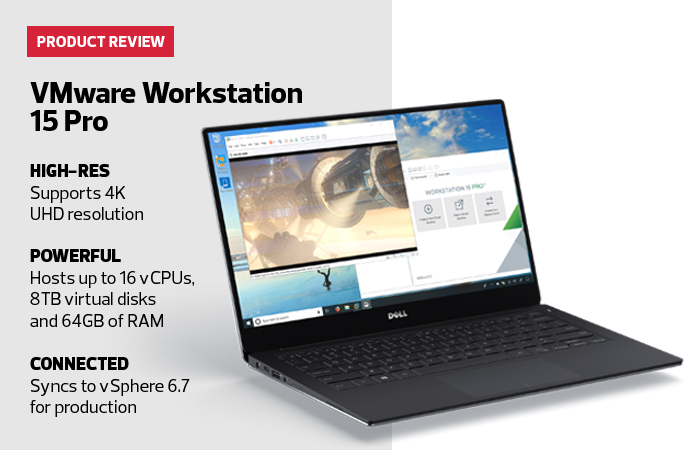 Users can automatically connect physical USB devices to a virtual machine when running. On Windows 10 version 1803 or later, users can access Linux virtual machines using secure shell (SSH) provided by the Workstation 15 Pro. When connected to a remote vSphere host, the inventory tree now shows a hierarchical arrangement in two different views: hosts/clusters and VMs, with a simple toggle between the two.

The only problem I could find with the software is the currently documented known issue involving mouse-clicking functionality when certain third-party software, such as WizMouse, is installed on the host. In this case, simply add mks.win32.processWin32MouseInput = “TRUE” to the virtual machine’s .VMX configuration file, and that solves the issue.