That progress has resulted in a host of data center consolidation best practices for state CIOs and their staffs. Last year, NASCIO released a “playbook” detailing many of them.

NASCIO advises state IT leaders to plan rigorously for such consolidation efforts; engage with all of the relevant stakeholders; create a roadmap; document IT assets; address costs; implement standards; manage expectations and expect surprises; make sure the new data center architecture is sustainable; and capture and report cost savings.

It is a significant undertaking, but there are equally meaningful benefits that result from having sound data center consolidation plans and best practices. States can see meaningful cost savings and achieve greater flexibility as they shift more applications and resources into the cloud.

What Does a Data Center Consolidation Strategy Look Like?

Planning is crucial for any successful data center consolidation strategy. The NASCIO playbook makes clear that state IT leaders must understand the needs of each state agency that will be using their data centers, and they must engage with these stakeholders early. They should also design the end state of the data center consolidation to “fit needs, instead of requiring agencies to find ways to work within (or despite) new government regulations or directives.”

“Part of this should include a gap analysis to understand and communicate the benefits of consolidation versus current capabilities,” NASCIO states. State CIOs’ teams should also “assess agencies’ requirements for data processing, storage and back-up, continuity of operations, and future needs or expansion.”

State IT leaders should understand the needs, requirements and any potential issues before setting a data center consolidation target date or launching any initiatives.

“Simply put, more planning and organization results in a smoother consolidation process,” the NASCIO playbook states. “The complexity of data center consolidation is often underestimated. Your team must develop a detailed plan and process.”

IT staff must identify the facilities, technologies, organizations, services, people and processes that will be impacted by the data center consolidation. “During the planning process, the team will need to understand the interdependencies between multiple applications as well as infrastructure to ensure minimal disruption and outages,” the playbook notes.

States should also create detailed inventories of their IT assets so that they can better plan for outcomes post-consolidation, NASCIO states; existing technologies and systems that are working and can be reused should be identified. State IT leaders should also discuss the advantages and disadvantages of different hosting environments (cloud, internal and hybrid) and make migration decisions based on the needs of the stakeholders. CIOs also need to decide how to fill technology and systems gaps where new investments must be made, according to the playbook.

MORE FROM STATETECH: Find out how to handle the human side of state and local data center automation.

That is a great deal of work, but following through on closing data centers, removing equipment and transitioning services to the cloud bring significant benefits to states.

“Almost every state is either consolidated or in progress,” Amy Hille Glasscock, a NASCIO senior policy analyst, said in an interview with Data Center Knowledge. “Everybody is looking for savings, and while it’s an involved process, you will save money if you consolidate data centers. You will save energy and have a more secure platform if you have everything under one roof.”

Arizona CIO Morgan Reed told StateScoop recently that the state has produced a report showing that, by continuing to consolidate data centers, the Grand Canyon State can save tens of millions of dollars a year. 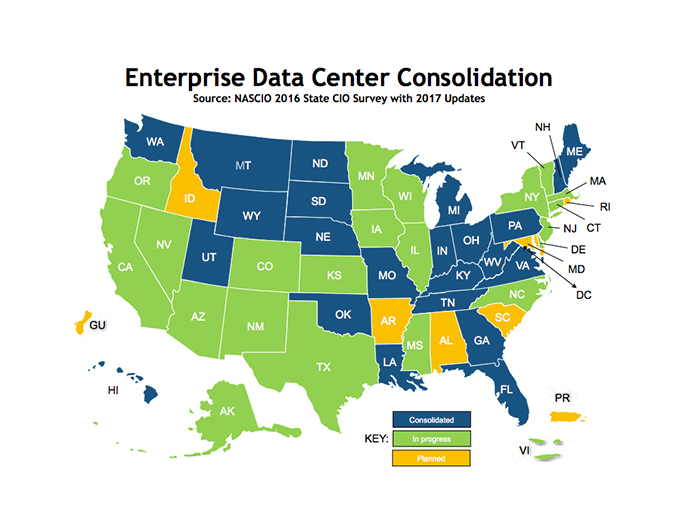 Reed notes that Arizona has set up a new Tier 3 data center, and as it has looked at its data center through a cloud-first lens, it has discovered that only about 25 percent of the data center infrastructure needed to be relocated and stay on premises, while it was able to simply just shut off 15 percent. Meanwhile, the remaining 60 percent “has been able to go into various public clouds, which is fantastic.”

Arizona has realized about $2 million in cost savings just from shutting down its own data center equipment, Reed says.

Another key benefit of data center consolidation and shifting to more agile cloud services that can be spun up quickly is that state agencies can move faster to launch new services.

“So, when the governor or an agency director says, ‘We want to do something different,’ it’s not going to be weeks and months of ordering equipment and landing it, installing power,” Reed says. “We can actually decide and respond faster, which is what our citizens expect.”

There are numerous other benefits that come from consolidation, according to NASCIO, including stronger IT security; the introduction of process standards such as Information Technology Infrastructure Library (ITIL) and Information Technology Service Management (ITSM); the promotion of enterprise integration and applications; improved support for legacy systems; the centralization of infrastructure maintenance and upgrades; and improved disaster recovery and business continuity.

“It's really a no-brainer in terms of deliverables,” Utah CIO Mike Hussey says in the NASCIO playbook. “Why spend money on distributed data centers when you can use that money to improve services.”

“As in 2007, the top challenges continue to be workforce resistance to change and agencies’ desire to remain autonomous,” according to NASCIO. “Additional challenges may include problems experienced in moving localized devices away from the current customer base, backlash when consolidation didn’t meet specific business needs, higher-than-anticipated costs and problems with seeking exemptions from state and federal statutory and regulatory requirements.”

State agencies often get stuck in the “partial progress” phase of consolidation, McCarthy says, “because they don’t make their changes fast enough, and eventually they are faced with multiple additional choices, such as new technology, providers and cloud options. Being overwhelmed can lead to inertia.”

IT leaders should also undertake cloud migrations after conducting due diligence. While a cloud-first approach “is usually the best idea for new development,” McCarthy says, “moving to cloud just for cloud’s sake is not viable if it costs too much money to get there.” CIOs need to consider the costs, in time and money, of system changes, reconfiguration, consultant time and more when it comes to cloud migrations.

VIDEO: Find out what state CIOs have on their IT modernization wish lists.

The NASCIO playbook offers numerous best practices, as do analysts and state CIOs.

Planning and stakeholder engagement is a common theme. McCarthy notes that “project portfolio management” is an old term, but it is still important.

Key leaders — CIOs, CFOs, program managers and others — need to meet and set priorities. “Is saving money more important? Or is replacing an older system that is no longer supported by the manufacturer more important?” McCarthy asks. Perhaps a new law has been passed and being able to gather and report on data is simply a legal requirement now; if so, that project needs immediate priority.

“If all of these variables are not part of the ongoing dialog, investments can get off track quickly,” McCarthy says.

Another best practice is to align IT systems with business needs, McCarthy says. “Since those needs can change rapidly, it’s more important than ever to seek better IT agility, with systems that can be changed via reconfiguration rather that full-blown custom programing,” he says.

Whenever possible, IT leaders should seek solutions “that use the native tools within a system to adjust its features and outputs.” This will make future updates and consolidation efforts easier to handle because the system will be more standardized, he adds.

NASCIO recommends states adopt ITSM and ITIL. “Missouri used both ITSM and ITIL when they consolidated their data centers,” the playbook notes. “They found it to be extremely useful to identify a standard supported across the enterprise. They found that not only could they tell the customer they would save money, but they would also get current technology, technological flexibility and readily available, highly qualified support.”

Another key best practice is to make the consolidations self-sustaining, either by renting out space to other state or local agencies or by using renewable energy sources to drive efficiencies.

“Politically, having buy-in from agencies and other customers because of a voluntary commitment (in the case of Ohio) or because of an executive order (in the case of Maine and Montana) is important,” NASIO’s playbook states. “But more importantly, customers/agencies must feel as if they are getting better service and security at the same or less cost. Only then will they want to continue if voluntary, and only then will a new administration want to keep moving forward under a previous executive order.”