Many state and local agencies, particularly those with a research emphasis, rely on high-performance clustered systems, data mining and real-time data processing. Such systems need the fastest possible storage — in throughput, low latency and maximum input/output operations per second — while also providing constant access to data.

The Pure Storage FlashBlade system is designed to deliver on all counts: microsecond latency, up to 1.5 terabytes per second of throughput and usable capacity of around 500TB per chassis, or 2.5 petabytes of capacity.

The Pure1 management system allows for management of up to five chassis and 75 blades through one pane of glass. The automated clustering system and N+2 redundancy with self-healing means that very little setup or maintenance is required, even with large systems.

Installing the system is straightforward. With no prior training, users should be able to configure storage, set up volumes and make them available to servers. Once the system is set up, users can easily install additional blades to increase capacity and performance.

With one set of five chassis, the FlashBlade system is fast enough (at about 1 gigabyte per second, per blade, or up to 75GBps with 75 blades) to support thousands of systems for virtual desktops as well as data lakes, Big Data and high-performance computing. As state and local government becomes more focused on data and other high-value assets, such robust performance will be critical for adequate storage.

With speed, power and extensive features, the FlashBlade system is capable of meeting the requirements for a wide range of important government IT tasks, from providing virtual machines to supporting data-intensive research. 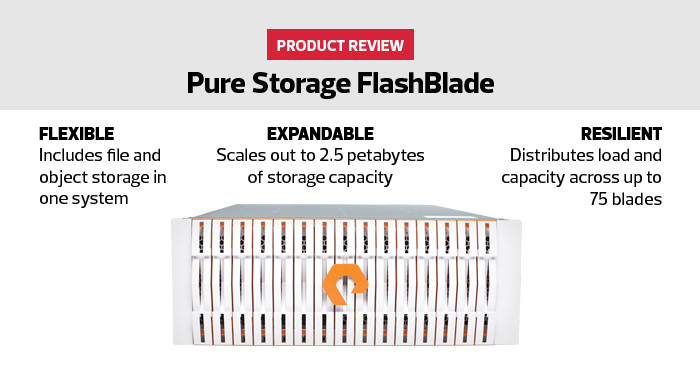 Support for Redundancy and Rapid Reconstruction

Pure Storage engineered the FlashBlade system for flash and NVMe flash. Many older systems have a long history of data center use, but this is a mixed blessing. Those systems also have a long legacy of old protocols that are based on hard-disk standards, which means that old commands and methods of accessing data (dating back to the 1960s) are included in many modern standards for addressing storage.

This adds overhead to modern devices that operate more like RAM than traditional rotating storage in how they’re accessed. Pure Storage bypasses those old protocols and standards with an all-flash system.

To ensure redundancy and fault tolerance, the FlashBlade system uses erasure coding as well as variable block sizes, distributing files across multiple blades in multiple chassis, with sufficient error correction so that even if any pieces are lost, the whole file can be quickly reconstructed.

In addition, pulling files from multiple locations on multiple blades increases throughput. With the FlashBlade, that happens automatically — no need for planning on the part of the administrator. The system is elastic and dynamic, self-optimizing for maximum throughput on files that see the most use, without sacrificing performance on other files.