Cape Girardeau Police Chief Wes Blair is modernizing his department with the latest technology tools, and in doing so, he’s improving public safety services and making his officers more effective and productive.

About two years ago, he replaced digital audio recorders with body-worn cameras to improve transparency and record important evidence for prosecutions in the Missouri city of 40,000 residents.

“Our prosecutors love access to cam video because it shores up an officer’s report. And if we have a citizen complaint against an officer, we can check the video and verify whether it’s legitimate,” Blair says.

“We can review video and pinpoint areas that might need to be improved,” Blair says. “And if we have officers who handled a situation exceptionally, we can show it to other officers, especially newer ones, and they can learn from that.”

Across the nation, police departments have deployed many technologies to keep officers mobile, from body-worn cameras to new in-car notebook computers and tablets, and applications such as speech recognition software. Combined, these various tools improve officer and public safety and aid in criminal investigations, allowing police to work much more safely and efficiently, which lets officers spend more time out in the field protecting their communities.

“It’s about working smarter and faster to benefit the people we serve, but also our staff and keeping officer safety and situational awareness at the forefront,” says Rick Stanley, president of public safety consulting firm RMS Associates and a former police chief in the towns of North Andover and Wareham, Mass. 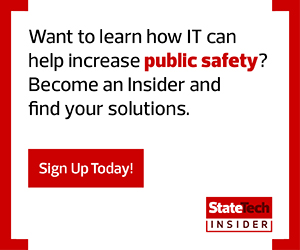 Easy Storage and Review of Video from the Field

The Cape Girardeau Police Department purchased 54 body-worn cameras from Getac Video Solutions because of its ease of use and unlimited cloud storage. Officers, who are required to record every interaction with citizens, can do so with a simple press of a button, Blair says.

When officers return to headquarters at their shift’s end, they connect the cameras to an eight-camera docking station, which transfers the video into its own storage drive and then uploads the video to the cloud, says Cpl. Ryan Droege, the department’s crime analyst who also helps manage IT.

“The dock has its own CPU and storage, so the video will be off the camera in five minutes,” he says. “With other solutions, the video is uploaded straight to the cloud, which can take one or two hours.”

To review footage, police supervisors and prosecutors log in to user-friendly cloud-based software, Blair says. When officers file their reports, they can easily add report numbers and categorize incidents.

“We get a lot of return on investment,” Droege says. “The cameras are versatile, multifaceted devices that do a good job of making the whole department better.”

In the past, staffers retyped the same information from one system to another. Now, the information is shared between apps seamlessly, Droege says. 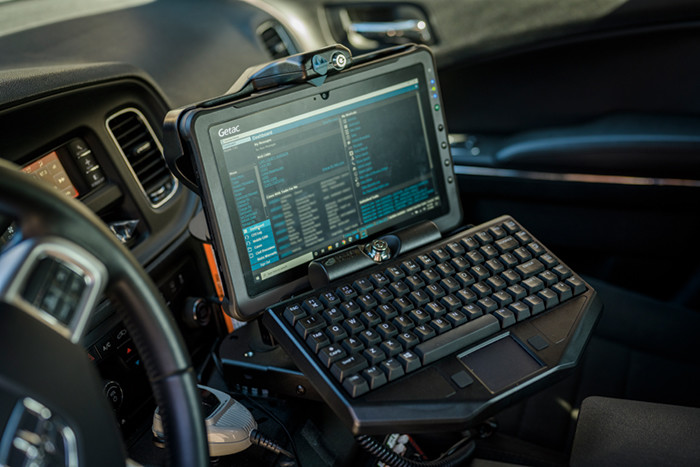 The Getac body camera dock offloads video from the device and into storage within minutes. Photography by William DeShazer

“When our officers can spend less time trying to figure out multiple software systems and less time typing up reports and retyping them into another system, the more time they are out on the street doing the job,” he says.

This spring, the department also equipped its 50 patrol cars with new rugged Getac F110 Windows-based tablets. The mobile devices, combined with the integrated software, allows officers to access information much more quickly when they respond to calls.

Previously, the department’s regular and mobile CAD systems were formatted differently, so information was displayed differently. “The interface was clunky in the car. Officers had to scroll left and right and tab between pages. Now, all the data they need is contained on one screen,” Droege says.

Officers can verbally file their reports in their vehicles instead of driving back to the station to type their reports, improving productivity and efficiency. That allows them to spend more time out on patrol to keep the community of nearly 50,000 residents safe, says Methuen Police Chief Joseph Solomon.

The software also improves officer safety and situational awareness because officers can verbally run license plates and background checks during car stops without taking their eyes off the vehicle in front of them. “They can keep their heads up and look out the windows,” Solomon says. “Before, they were hunched over, typing on the keyboard.”

Dragon Law Enforcement is integrated with Methuen’s records management system. To fill out reports in their cruisers, officers simply double-click on the records management system’s icon and speak into a Dragon microphone that’s attached to their computer, he says. The software is extremely accurate, says Solomon, whose department began using the technology three years ago. Once officers are finished with dictation, they review the reports for accuracy and make any necessary edits, he says.

“It’s a big plus. We’ve had it for so long, it’s become a staple of our police department,” he says.