Protecting the safety of officers while driving their cars and other motor vehicle remains a major problem in the digital age.

According to 2016 FBI data, crashes involving motor vehicles were the top cause of accidental officer deaths in the line of duty. According the National Law Enforcement Officers Memorial Fund, there were 49 vehicle-related officer deaths in 2018 (including motorcycle accidents), making up 31 percent of all officer fatalities that year.

Collision avoidance technology and driver assist technology can help police departments keep their officers safe in the line of duty. Crash avoidance is critical for officers as they respond to emergencies. Any crash limits an officer’s ability to respond, whether due to injury or a damaged vehicle.

Daniel Sharp, chair of the highway safety committee at the International Association of Chiefs of Police, says that police are distracted while driving because of the nature of their jobs. They have radios, speed detection devices, phones and laptops in their vehicles, all meant to get them as much information about a situation or potential situation as possible, even while driving.

“We’re seeing more cases where police officers are crashing due to distraction,” he tells StateTech. “Technology is distracting us. Let’s use technology to come up with a solution.” 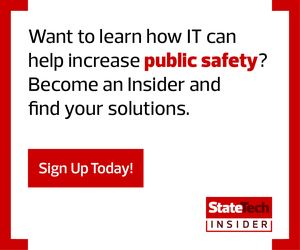 What Is Driver Assist Technology?

“Research indicates the systems are achieving significant safety outcomes,” the report says. “ADAS are increasingly impacting a variety of law enforcement functions and police officers will benefit by educating themselves on how the various technologies work and how they affect vehicle dynamics.”

Driver assistance technologies “not only keep drivers and passengers safe, but they keep other drivers and pedestrians safe too,” notes the National Highway Traffic Safety Administration.

There are numerous kinds of driver assist and crash avoidance technologies, NHTSA notes. For example, a lane departure warning system is “an advanced safety technology that alerts drivers when they unintentionally drift out of their lanes without a turn signal.” LDW systems do not take full control of the vehicle or keep the driver from operating it, the agency says.

Blind spot detection systems are another example, and the system cautions drivers “with an audio or visual warning if there are vehicles in adjacent lanes that the driver may not see,” and “the alert helps facilitate safe lane changes,” according to NHTSA.

Meanwhile, a forward collision warning system is an advanced safety technology that “monitors a vehicle’s speed, the speed of the vehicle in front of it, and the distance between the vehicles,” NHTSA says. “If vehicles get too close due to the speed of the rear vehicle, the FCW system will warn that driver of an impending crash.”

The Polk County Sheriff’s Office in Florida partnered with Mobileye, an Intel company and leading supplier of software that enables advance driver assist systems, in 2013.

“We were looking for a way to help deputies focus on driving by alerting them when they might not be paying 100 percent attention to the roadway,” says Carrie Horstman, public information officer for the Polk County Sheriff’s Office. They currently use it on about 800 vehicles.

The Mobileye system “analyzes the risk of forward collision, lane departure, headway/following time, excessive speed, and pedestrian hazards,” according to the company. “When a threat is detected, the system emits visual and audible alerts — in real time — giving the officer time to possibly avoid a collision or, at the very least, mitigate its severity. These few seconds can be critical to the safety of your officers while they are in their vehicles.”

Horstman says the sheriff’s office likes “how the device acts like a driving coach that is constantly monitoring the vehicle position relative to other obstacles, vehicles, pedestrians, speed and all lanes of travel, as well as how close they are behind another vehicle and alerting them to safe distance based on speed.”

“We lock the volume on the device as well, so that it can constantly be heard,” she says.

Mobileye is one of the leading providers of driver-assist technology for public safety agencies.

The office has seen a reduction of rear-end collisions, though Horstman adds that “trying to measure the success is nearly impossible because the success of it is related to crashes that didn’t happen.”

Car manufacturers are also adding this kind of technology to police vehicles themselves. The 2018 Chevrolet Tahoe Police Pursuit Vehicle introduced an enhanced driver assist package as part of the car.

That package includes forward collision alert, which uses radar and a forward-looking camera to measure the closing speeds between a vehicle and objects in its path, and lane-keep assist with lane departure warning, which provides gentle steering to help drivers avoid crashes due to unintentionally driving out of their lanes when turn signals are not activated.

“When they’re on road patrol, police officers are constantly multitasking,” Theodore Quisenberry, a law enforcement veteran and the retired head of Michigan’s Royal Oak Police Department and of its Oakland County Homeland Security Division, said in a Chevrolet press release about the 2018 vehicle. “Now when officers are scanning their surroundings, so is their vehicle. That will help them stay safe.”

Nathanial Wish, co-founder and CEO of Responder Corp, which works toward innovation in public safety, also sees head-up displays, which puts information directly onto the windshield, as a technology solution that will save lives of both officers and other people on the road. These kinds of displays “will focus officers’ attention on the road while still allowing them to get pertinent updates for a call,” he says.

Wish also says technology is becoming a solution to another reason for vehicle-related officer crashes: drivers who don’t get out of the way of emergency vehicles or officers making stops on the side of the road.

That comes from systems allowing emergency vehicles to send alerts to approaching cars, or cars about to be overtaken by an emergency vehicle, so those drivers can move out of the way. “People can’t even hear our sirens, or they just stop or freak out or don’t know what to do,” Wish says. “If they got an alert with a big arrow that says an emergency vehicle is approaching and move to the arrow, it would make a world of difference.”

HAAS Alert is one company providing those alerts. In 2018, it was awarded a $1.1 million contract from the Department of Homeland Security Science and Technology Directorate to build responder-to-responder and responder-to-vehicle systems.

The HAAS Alert Safety Cloud solution is already standard on 90 percent of new fire trucks, says Cory Hohs, CEO and founder of HAAS Alert, who says he founded the company after he was almost struck by an ambulance.

Those alerts go to drivers of other emergency vehicles who may also be racing to the scene and to drivers of connected cars. The system gives drivers about 20 seconds of warning; if drivers just relied on sirens and lights, they might only have a few seconds.

When HAAS Alert doesn’t come built into a vehicle, it takes about 20 minutes to install, Hohs says. Users can also tailor the system so that it only sends alerts when they use specific light and siren patterns.

While not every car on the road is a connected car, HAAS Alert also works on the Waze navigation app. As of April 2020, over 100 million driver alerts had been processed through that platform alone, Hohs says, adding that the company is now in negotiations with another large navigation app company.

He also says HAAS alerts can go to any other group that could use emergency information, including state emergency management centers, departments of transportation, state patrols, and state and county sheriff’s offices.

Driver assist technologies are not yet in every police car, but they are rapidly becoming part of how police departments and sheriff’s offices protect first responders on the road.