From 2017 to December 2019, the number of cyberattacks per month on state, local, tribal and territorial governments rose by an average of 50 percent, according to a recent report from security firm BlueVoyant.

“Security automation and orchestration provide these teams with a fighting chance to work their way through an almost insurmountable volume of work to detect, eradicate and recover from cybersecurity incidents,” writes Jeff Falcon, CDW cybersecurity practice lead, in a CDW blog post. 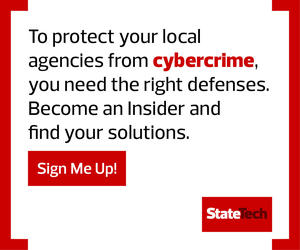 Can Cybersecurity Be Automated?

Cybersecurity can, indeed, be automated. When it comes to security operations, there is always room for operational efficiency improvements, says Rishi Bhargava, a vice president of product strategy at Palo Alto Networks.

“Automation can play a critical role in aiding security teams with a deluge of security alerts, speeding up their investigations and handling the manual busywork that comes with triaging incidents,” he says. “This helps to effectively reduce the mean time to respond for alerts.” The MTTR measures the average time it takes to control and remediate a threat.

Cybersecurity automation will not make an IT security analyst “a better threat hunter or provide your team with skills it doesn’t already have,” Jesse Wiener, a solution domain manager for CDW’s security practice, writes in a CDW blog post, “Tapping Automation to Improve Your Threat Response.”

“It is a tool that can free up cycles for your analysts,” Wiener writes. “It can be the glue that links disparate systems, can correlate information, automatically take action and provide your teams with intelligent information at the beginning of an investigation.”

5 Ways Cybersecurity Automation Should Be Used

There are numerous ways in which cybersecurity tasks can be automated at government agencies. Here are some examples, but this list is by no means exhaustive.

READ MORE: Find out how government agencies can rethink their approach to network security.

“Automation technology including machine learning or artificial intelligence can close gaps by correlating threat intelligence and coordinating responses at machine speed,” Richberg says. “In particular, government IT leaders with limited budget resources and staff should leverage automated technologies to accelerate detection and response first and foremost, which in turn immediately frees up time for humans to focus on other cybersecurity needs.”

This kind of automation “is not easy to set up, and it will take a good understanding of your environment, tools and processes to make it work, but solutions like Phantom, ServiceNow and ThreatConnect (to name a few) can help,” Wiener writes.

DOWNLOAD: Read this white paper to find out how your agency can protect data in a changing security landscape.

Cybersecurity teams should “routinely evaluate all their work to identify opportunities to automate as much routine activity as possible,” CDW’s Falcon writes.

If the answer to these questions is yes, he says, then the process or task would be a good candidate for automation.

However, if the action requires decision-making or there is a high risk in automating the action (e.g. blocking access to high-traffic cloud services) then “chances are, you would want this step or action to be handled by a human reviewer,” Bhargava says.

“An important thing to note is that complexity does not necessarily factor into the equation when considering automation as automated workflows or playbooks can be easily customizable, with multiple subroutines and decision trees, to address the most complex use cases,” he adds.

IT teams should set policies and procedures to drive automation, Richberg says, “in other words, setting the goals and creating the playbooks for AI and automated action.”

“People are often the scarcest resource in cybersecurity, so using them on tasks that need human judgment and experience — and automating the rest — makes sense as an effective and cost-effective approach to cybersecurity,” he adds.

In July, the states of Arizona, Louisiana, Massachusetts and Texas, along with Maricopa County, Ariz., announced a partnership with the Multi-State Information Sharing and Analysis Center and the Johns Hopkins Applied Physics Laboratory (APL) to pilot a cybersecurity automation program.

The agencies are using SOAR tools, which “enable organizations to collect security-threat data through multiple sources and perform triage response actions significantly faster than with manual processes,” according to a Johns Hopkins press release.

The hope is that it will enable the agencies to “quickly and broadly share information — in near real time — and leverage automation to prevent or respond to cyberattacks,” the release states.

According to the MS-ISAC, the pilot will “focus on the curation of the feed and the processes used by the participants to triage, prioritize and act upon” the resulting indicators of compromise.

The states and the county will use automation and orchestration to gain “efficiencies in tasks, processes and resultant actions for the producer and consumers” of the indicators of compromise, according to a statement from the MS-ISAC.

Specifically, the pilot will help the states identify ways to cut down on manual tasks and promote the sharing of actionable threat information. Another key goal of the initiative is to identify the orchestration services needed to integrate cybersecurity responses, such as sensing, understanding, decision-making and acting.

The goal of automation, Bhargava says, isn’t to replace human analysts “but to help them be better, faster and more effective at their jobs.”

“By reducing the number of alerts that require human review and eliminating mundane tasks, automation helps analysts avoid alert fatigue and focus on proactive threat hunting and improving incident response procedures,” he says. “There would be a need for a subset of analysts who are comfortable with writing scripts and developing custom playbooks for more sophisticated routines.”