911 administrators know better than anyone that emergencies, however unforeseen, can crop up and cause disaster. No element of public infrastructure is immune to these events, as we’ve seen with recent widespread power outages in Texas.

Telephony networks are susceptible to intermittent outages, and on top of these concerns, the current 911 infrastructure has had only two major upgrades since implementation 53 years ago. It’s imperative for state and local government officials to prepare redundancies for their public safety systems.

When a phone network goes down, too many 911 centers fall back on ad hoc workarounds that put telecommunicators in a difficult position.

Sometimes calls aren’t delivered at all, and in other cases, neighboring agencies out of jurisdiction receive calls and are forced to remotely coordinate a response, significantly impacting response time.

It is past time for public safety officials to build cloud-based redundancies into their budgets to keep 911 centers, known as Public Safety Answering Points (PSAPs), at full operating capacity regardless of network outages. Without a safety net in the cloud, the status quo isn’t working for 911. Here are the challenges administrators face today and how to better establish a foundation of redundancy. 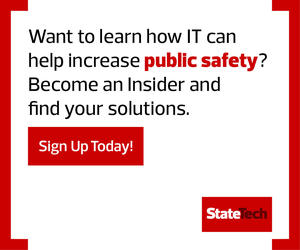 Challenge 1: Dialing 911 When a Network Is Inoperable

When the wireless cell network is inoperable, the first barrier is the 911 call itself. The single most important aspect of 911 service is alerting first responders at local PSAPs that an emergency is taking place. Callers expect to connect with a telecommunicator right away when they dial for emergency services, but instead they receive a busy signal.

According to the National Emergency Number Association, more than 80 percent of all 911 calls come from mobile devices, and cloud-based 911 platforms can receive location data directly from Apple and Google when an emergency call is placed from an iOS or Android device. These capabilities are highly resilient and network agnostic, meaning they stay operational during a network outage.

Even if the 911 call never connects to the PSAP, a 911 telecommunicator will see that a 911 call was made from a specific phone number at a specific location, so the 911 center can dispatch a first responder to the scene.

EXPLORE: How to build an effective emergency operations center.

Challenge 2: Answering the 911 Call During an Outage

If a local network is down, the immediate fix is to route incoming emergency calls to other 911 centers in the area so that no call goes unanswered. However, it’s possible the primary PSAP that was supposed to receive the call doesn’t even know a backup PSAP is taking calls for them.

In a normal 911 call, the PSAP retrieves the caller’s approximate location from the ALI database, but with transferred calls, telecommunicators must verbally question callers to determine their location. This isn’t practical, given that the personnel at the backup PSAP typically has no familiarity with the geography of other PSAPs. Further, their mapping capabilities are often limited to their own jurisdiction.

An integrated, cloud-based system can receive supplemental location data separately from legacy ALI systems and can provide accurate and timely location information even when rerouted to a backup PSAP.

Challenge 3: Dispatching a Response to the 911 Call

Even when an ad hoc backup PSAP is able to answer the 911 call and successfully determine both the location of the caller and the nature of the emergency, getting the appropriate emergency services agency to respond represents another barrier.

Backup PSAPs typically don’t have access to unit availability or response plans for areas outside of their immediate jurisdiction, so they may need to rely on a telephone or radio connection to relay information back to the original PSAP. These details are contained in a Continuity of Operations Plan, a document that represents all the disaster preparation within a PSAP.

Without significant capabilities in the cloud, though, disaster planning and interoperability is limited. Widespread adoption of cloud-based 911 technologies and cloud-aided dispatch would create an environment in which backup agencies could enter incident information into their own system and it would be transferred to the original PSAP via a standards-based integration. This would allow the agency that has the jurisdiction to dispatch even without being able to receive the original 911 call.

READ MORE: What steps need to be taken when your agency is deploying an emergency operations center?

For resilient end-to-end workflows and geographical diversity of dispatch operations, state and local agencies need to think beyond just answering 911 calls and should consider full-scale digital transformation for the disaster recovery and backup capabilities.

It can take months or years to convince all of the stakeholders involved of the need to do this, however, and in the meantime, there is plenty local officials can accomplish by merely building redundancies to their on-premises dispatch system in the cloud.

The goal of every 911 center is to quickly and efficiently field emergency calls and dispatch the necessary services. With the vast majority of Americans calling 911 from their mobile devices, it’s critical that there be guardrails in place to handle inevitable network outages.

Everyone in the public safety world has a story of an unexpected catastrophe that slowed emergency response time, but we are nearing the day that such outages can be easily handled. Resiliency is in the cloud.

MORE FROM STATETECH: How are FirstNet services evolving for first responders?

Photo Courtesy of the City of Cambridge, MA