Public Pressure to Private Sector
From terrorism and blackouts to labor strikes, Gino Menchini faced it all as New York’s DoITT commissioner.

“When people are making sacrifices, it’s important that senior people are visible and accessible. They have to set an example,” says former New York City CIO Gino Menchini.

On Dec. 28, 2001, just three months after the World Trade Center attacks, Gino Menchini stepped into one of New York City’s highest profile jobs: CIO and commissioner of the Department of Information Technology and Telecommunications.

During the ensuing four years and three months, Menchini dealt with security and emergency preparedness concerns, a citywide power blackout and a transit strike. And with the world’s attention focused on New York’s recovery following the Sept. 11, 2001, terrorist attacks, time was not on his side. As he heads to an industry job with CA Inc., Menchini shares his insights with StateTech.

In times of crisis, it’s important for senior management to set an example for their employees. But Menchini found his senior staffers setting the tone during the NYC transit strike.

Attendance levels during the transit strike were comparable to those on a regular business day. “You expect managers to go over and above, but when you have lower-level staff members working 16 hours during a blackout and barely sleeping, and then turning around and coming back into work, I think that’s a remarkable thing,” says Menchini.

“When people are making sacri­fices, it’s important that senior people are visible and accessible,” he says. “They have to set an example. It sets the tone across the entire organization.”

Menchini likens New York City’s government IT environment to that of a federal or state agency because of the range of activities — from policing to child care — that it performs. “That’s not the case in the private sector, where you have organizations with expertise in a particular industry,” he says.

With such a wide variety of roles in government, requiring specialized expertise, the role of a city CIO is not to try and control everything because that stifles initiative and creativity. The idea is to establish the right mix of large enterprise initiatives and smaller, agile agency technology initiatives, Menchini says.

“Government technologists should try to strike a balance to leverage their size and scale and yet be agile, responsive and focused. It’s a bit of a balancing act, but I think that’s what you have to try to do as you develop your IT governance model and decide what type of activities you will approach and deal with in a centralized manner,” he advises.

For Menchini, the main differences between government and industry fall into three categories: investment, processes and best practices. Tackling underinvestment in IT in the public sector is one key to its effective development. Government typically does not view IT investments as a path to a more cost-effective, citizen-focused organization.

Public-sector processes are a mixed bag. On one hand, the accountability and transparency requirements make sense — and, let’s face it, they’re not going away. But on the other hand “bureaucratic overhead can hurt us in terms of trying to act quickly and make good business sense,” says Menchini, who adds that government workers remain remarkably productive despite all the rules to which they must conform.

The private sector has the freedom to experiment a little more than their public-sector counterparts. You will read about failed large-scale government IT projects, notes Menchini. But failed private-sector projects rarely make the headlines.

Where the public sector could learn best from the private sector — particularly the financial services sector — is in the arena of best practices.

“Now that IT in government is becoming more and more institutionalized, [government officials] need to start looking at reproducing the same level of diligence and investment in IT management tools to support sound management processes,” concludes Menchini. 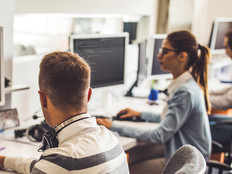