It's always the proverbial sunny day when Kerry Williams gathers survey information for engineers and designers working on highway projects for the Oregon Department of Transportation. He never has to cross traffic, contend with cars flying by at 70 miles per hour, navigate his way around waterways or dress in layers to cope with fast-changing temperatures.

Instead, this photogrammetric project surveyor and his colleagues sit in the comfort of an office to do their jobs, relying on photography to determine measureÂ­ments between objects. Williams develops base maps and other surveying data using digital aerial photographs and a creative digital workflow that relies on dual 23-inch Planar 3D monitors, NVIDIA 3D Vision Pro radio-synchronized shuttered glasses, specialized photogrammetric software, a high-end graphics card and a Windows XP computer. He also uses a 12-button 3D input device (which he refers to as a rat because it's much larger than a standÂ­ard mouse) that allows him to measure everything in a 3D environment.

"I like to tell people that I can do the work of 20 old-time surveyors while sitting at my desk," Williams says with a laugh.

That type of productivity level is needed. With its thick forests and rugged mountainous terrain, Oregon still relies mostly on boots-on-the-ground surveyors to physically measure sites. But the state is also in need of greater photogrammetric capability, according to Ranvir Singh, chief of surveys for the Oregon DOT.

Photogrammetry is especially effective for gathering survey data in areas where traffic is dense and onsite surveyors are at more physical risk, or in areas that are environmentally sensitive. Both are on the increase in Oregon. The method also makes sense for larger areas that are too cost-prohibitive for field surveys. For Oregon and other budget-strapped states, cost increasingly plays a factor in decisions about what to survey and how.

"What we're doing in photogramÂ­metry is really important because it gives us one more very effective tool in our toolbox," says Singh. "And it's one we're likely to rely on more in the future."

The digital process is hardly new, Singh points out. The photogrammetry group at the Oregon DOT has existed since the 1950s and has been using 3D monitors, glasses and other tools since the late 1990s, when it, like many state agencies, first began transitioning away from an analytical process that relied on film photography and large, expensive and complicated "stereo-plotters" that gave photogrammetrists a way to look at two film photographs and see a 3D view of the terrain.

At the time, 3D monitors, 3D glasses and other tools, which formed the basis of a new digital process, were still bleeding-Â­edge and ultimately required about a decade to fully mature, says Singh.

Recently, though, everything has come together for optimal performance. Three years ago, Oregon's photogrammetrists switched to a fully digital workflow, and in March, they ditched their old, outdated CRT monitors in favor of state-of-the-art, flat-screen, 3D stereoscopic monitors from Planar.

"After more than 10 years of really fighting with the system, we finally got it operational, and everything works like it should," Singh says. "Although nothing has drastically changed on the front end, the technology behind the scenes has changed a lot, and now we have really beautiful displays where we can see better."

The flat-screen 3D monitors are just one of the latest developments in digital photogrammetry. With these advances, when photogrammetrists superimpose new designs on the photograph, the machine's improved refresh rates and accuracy enable them to immediately pick out a visual point in one photograph and quickly match it to the same point in another photograph. This capability is essential to building the geometry and instrument setup needed for accurate measurement.

"It can find a matched pattern in a grass field that looks like nothing but grass to the human eye, but the computer can compare pixel to pixel to find an exact match blade to blade and between color variations," Artman explains.

He adds that the capability took software programmers 20 years to perfect. Photogrammetrists used to perform that by hand, which entailed identifying in two photos the same distinctly visible features, such as the corner of a sidewalk or a paint mark on the pavement. "But the process and the technology have gotten so sophisticated now that we can do an instrument setup very, very fast in almost any terrain, and it's extremely accurate too," he says.

And the 3D glasses, which allow users to see a separate photo with each eye, make measurements intuitive and natural for photogrammetrists ("with practice, of course," says Williams) and enable them to utilize their own surveying acumen and experience.

"Our machines can find a height -- the ground surface, usually -- without using stereo vision," Williams explains, noting that by matching parts of two photos representing the same place on the ground, they can calculate the angle of that spot from the photo center and the camera position and make a trigonometric solution for location. "With the glasses, we can easily see if the machine was correct and use our judgment to see if the measurement was useful."

Using the advanced digital process, Oregon photogrammetrists are also able to zoom in or out as far as necessary to determine geometric properties of a specific object or gain a complete overview of the terrain; move quickly from one photo to the next; work with life-size maps, rather than scaled versions, to correct coordinates; and eliminate from view unnecessary objects present within a photograph, such as a fence or a drainage system. Using film, switching photos involved a 20-minute process, but the "rat" takes just a few clicks.

"These things have been available to us since we began switching to digital," says Singh. "But now the process is just so much more streamlined."

A Baseline for the Future

With the digital process fully in place, Singh says his department is well posiÂ­tioned to take advantage of the next generation of digital surveying tools, including mobile and airborne 3D laser scanning and advanced 3D point cloud and remote sensing technologies.

"As traffic becomes heavier and there is more need to be environmentally sensitive, we will need access to alternative, remote-sensing technologies that allow us to gather survey data but do it in a safe, environmentally conscious and cost-effective way," says Singh. Ultimately, he aims to make the source of the survey data transparent to highway designers. They won't know whether the information came from a photograph, a point cloud or a field surveyor -- "they'll just know it's a good product."

Photogrammetry is the practice of relying on photographic images to determine the geometric properties of objects in those images.

The methodology, which dates back to the 19th century and is used for everything from highway design and topographic mapping to meteorology and police investigations, relies on the identification of common points within two images to develop positional relationships between them. Features in the photos can then be triangulated to mathematically determine the 3D coordinates of a point of interest. 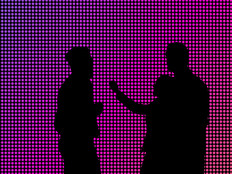