The New York City Department of Transportation has taken part of its operations paperless.

City transportation workers in charge of inspecting street construction projects use tablets to access and review construction permits. If they discover problems, they can issue violation notices and other requests on the fly.

That's much faster and less cumbersome than when inspectors lugged construction permits to each site to make sure construction crews met requirements. Inspectors completed paper forms by hand during the site visits, then dropped them off at the end of the workday for support staff to type into the computer system.

"We've gone from the Stone Age and dealing with stacks of paper to just going to sites with handheld devices that capture all the information," says Vincent Maniscalco, assistant commissioner of DOT's Highway Inspection and Quality Assurance (HIQA) division.

A growing number of government agencies are embracing tablets to boost productivity and efficiency. Most use slates as lightweight, convenient secondary computer devices for mobile workers, says Bob O'Donnell, vice president of clients and displays at IDC. But some use the devices as desktop replacements as well.

To be sure, tablets aren't new to the public sector. Many fire and public safety departments have used rugged tablet PCs for a decade. The difference is that the latest generation of touch-screen tablets offers broad appeal because they're less expensive, O'Donnell says.

Tablets present the perfect form factor for mobile employees because the devices are more portable and user-friendly and generally boot up faster than notebook computers, IT administrators say. The devices come with different price points and operating systems — Android, Apple iOS and Windows. The right one depends on an agency's needs, existing infrastructure and budget, administrators say.

The town of Longboat Key, Fla., considered rugged tablets for its fire department, but standardized on Apple iPads because they were more affordable, says IT Director Kathi Pletzke.

County caseworkers use the tablets while visiting clients, and when they return to the office, they connect the tablets to a docking station to use them as desktop machines. The docking station features a 20-inch LCD, full-size keyboard and mouse. "This way, we don't have to refresh two types of hardware," Mutzel says.

The IT staff standardized on a Windows 7 tablet because Lancaster County is a Microsoft shop and can use its existing security policies and infrastructure, such as Active Directory for authentication and a virtual private network client for remote network access.

"It eliminated having to buy new software. We didn't have to reinvent the wheel," Mutzel says.

10% of the 108 million tablets purchased this year will be for workplace usage. That number will increase to 15% by 2015.

Tablets are just one piece of the puzzle when government agencies want to use mobile devices to streamline processes and improve productivity — they also need software. Many communities such as New York City, Longboat Key and Lancaster County have developed custom software to transition from paper to digital documents.

New York City DOT's HIQA division first implemented tablets in 2005 when the IT division equipped the city's 100-plus inspectors with rugged tablet PCs. At the time, a text-based application allowed inspectors to complete forms electronically. But the application was not wireless. Inspectors had to visit the office after work to upload inspection results onto the mainframe and download their new inspection assignments for the next day.

This April, DOT launched a web-based street construction inspection app called DASH that allows inspectors at construction sites to use the city's private cellular wireless network to transmit their reports and retrieve new assignments. "We wanted to take advantage of real-time communication as opposed to the 'store and upload' model," Schachter says.

Over the past two years, DOT has replaced its old rugged tablets with more cost-effective and lightweight alternatives. Today, most inspectors use HP EliteBook convertible tablet PCs. Because inspectors have shared feedback that they don't need a keyboard, within the past year the IT staff has begun rolling out Asus Eee EP121 tablets.

Inspectors can easily complete electronic forms by tapping on dropdown menus, and if they need to type up details, they can use the touch-screen keyboard, Schachter says. The new application includes a GIS map that marks locations in real time. When the inspectors start their day, they can see all their inspection locations and plan the most efficient routes to take, he adds.

New York City issues about 250,000 street construction permits a year. Inspections that used to take up to three days to process are now processed in one day. DOT employees can immediately notify construction crews of violations, such as unevenly paved roads, by e-mail.

The technology not only makes the inspection process more efficient, which saves money, but allows inspectors to perform more inspections per day, which improves safety in the city. "The most important benefit is having safer streets," Schachter says. 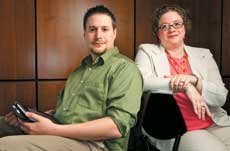 In May, Lancaster County's MH/MR/EI office issued tablets and mobile Internet hotspot devices to 125 caseworkers who visit clients to ensure they are getting the services they need, such as therapy or job placement services.

The county built a custom application and new database to automate its paper processes, says Jen Koppel, deputy director of administration for the MH/MR/EI office. Caseworkers who are visiting clients use the tablets to electronically complete case notes and fax referrals to service providers. They no longer need to return to the office to do paperwork.

The caseworkers find the tablets easy to use and have multiple ways to input data, Mutzel says. Employees write notes with a stylus, and Microsoft OneNote software converts it to text. Other workers can use text-to-speech software to dictate notes or type using a wireless keyboard.

Thanks to the technology, residents receive services faster. The county has eliminated four clerical positions, reduced paper consumption and printer toner usage, and pays less for mileage reimbursements because employees don't have to drive to the office to do paperwork, Koppel says. Furthermore, the caseworkers can spend more time with clients and bill those hours to insurance companies.

"It saves money and generates revenue, and that's the ultimate goal," Koppel says.

Longboat Key's firetrucks are packed with traditional firefighting equipment, such as hoses, ladders and axes. Now the town's Fire Rescue Department has added iPads to the mix.

When firefighters race to a fire, they can use the tablets and a web-based application to access tactical surveys for commercial or multiresidential buildings. These surveys provide important building safety information, such as the location of fire alarm control panels and sprinkler systems, Pletzke says. The technology allows firefighters to strategize before they reach a fire, and they're provided with much more detail than in years past when they relied solely on three-ring binders filled with one-page summaries of each building. With the tablets, they can now access interactive maps and aerial photos of each building and the location of nearby fire hydrants, color-coded for the amount of gallons they can pump per minute.

"With the iPad, they can spin an image around and look at the building from different angles and tactically decide the best way to get a 75-foot ladder truck there," says Pletzke.

Firefighters used to perform tactical surveys and fire inspections on paper and then go back to the station to type reports. Now they can perform those tasks electronically on their iPads, thanks to web applications that the town's IT department developed during late 2010 and early 2011.

The IT department purchased seven iPad 2s with 3G wireless for Fire Rescue. Overall, the technology has improved safety and allows firefighters to do their jobs much faster and more comprehensively, says Longboat Key Deputy Fire Chief Sandi Drake. The applications let firefighters add more information in their tactical surveys, such as roof access details. "Understanding where everything is helps you to manage the emergency better," she says.

While other jurisdictions have deployed tablets and gone paperless, agencies such as the San Mateo District Attorney's Office in California are taking baby steps and piloting the mobile devices to determine the benefits.

During the past year, IT Manager Paul Strobeck purchased eight iPads for the DA office's management team. They currently use the iPads for e-mail, scheduling, and accessing and editing files on the network.

The DA's office — like the rest of the county's offices — is crafting a mobile strategy. This fall, Strobeck will extend the iPad pilot to an additional 10 deputy DAs. He is also working with the county's IT department to pilot client virtualization and will test VMware View to give iPad users access to their full desktop.

Overall, government agencies say their tablet projects are worth every penny. In New York City, for example, the DOT went live with its app in early April. One month later, the group saw an increase in the number of daily inspections completed.

"Within a month, we achieved one of our main objectives, and that's to improve the productivity of our field inspectors," Schachter says.

IT administrators say tablets are easy to manage and secure. In Lancaster County, Pa., the IT department uses remote management tools to troubleshoot the tablets, says Rick Mutzel, the director of data integrated services for the Office of Mental Health/Mental Retardation/Early Intervention. As for security, the IT department uses Windows 7 BitLocker technology to encrypt the hard drive. Employees also use a USB key fob to boot the device.

In Longboat Key, Fla., each iPad is protected with a username and password, so users can't download apps on their own. If the devices are lost or stolen, the IT staff can use Apple software to remotely wipe the devices, says IT Director Kathi Pletzke.

Thinking about launching a tablet program? Here are 5 tips to make the transition easier.