When Steve Reneker rejoined the city of Los Angeles as general manager of its Information Technology Agency in late 2012, he had come full circle. Reneker launched his public-sector career in LA and had recently retired from a CIO post for the city of Riverside, Calif.

He spoke with StateTech Managing Editor Amy Schurr about his vision for IT and an ambitious project to bring broadband to every business and home in the city.

StateTech: What IT responsibilities does your agency handle?

Reneker: The city is very decentralized — most departments have their own data centers and IT organizations. Our agency provides central services for things such as enterprise resource planning, our financial system, radio systems, networks and applications across multiple city departments.

We also manage Channel 35 and our cable broadcast, the 311 Center, a large data center, and we install and maintain the electronics on the city's helicopter fleet.

StateTech: What is your overall IT vision for the city?

Reneker: We hope to provide an organizational structure that provides education and skills for all staff so that we can transform technology infrastructure in LA. We strive to be a model IT organization that provides proactive leadership, innovation and customer service.

StateTech: What IT environment did you inherit when you rejoined LA?

Reneker: When I got here, we were still recovering from the recession. Over the previous five years, the city had reduced staff by approximately 45 percent and the budget by close to $20 million. As you can imagine, morale was low.

About 60 percent of our staff are eligible for retirement in five years. We have a very senior workforce — in fact, only five of our employees are under 30 years of age. The decentralized organization really had no vision or strategy for efficiently delivering IT services. Also, the majority of our hardware was at its end of life, and much of it was not under a warranty or service program. 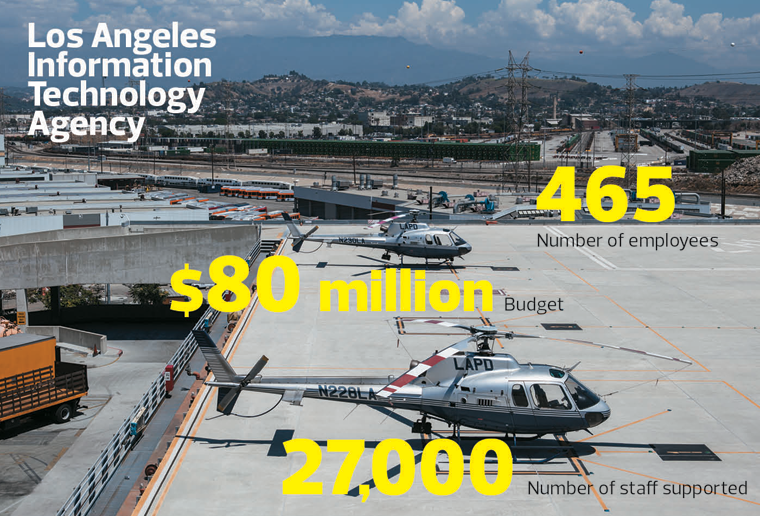 StateTech: How did you approach upgrading systems?

Reneker: We primarily focused on making sure we're secure and that public-facing websites were reliable. We replaced things like intrusion detection, intrusion prevention systems and firewalls, and put in load balancers to keep our websites reliable.

Then we started to replace servers and had to replace about 10,000 PCs that were still running Windows XP. We got to Windows 7 by the April deadline.

StateTech: What other major IT projects did you embark on?

Reneker: We rolled out the MyLA 311 mobile app. It allows citizens to notify us of any problem, whether a pothole or dead animal, and the request goes directly to the 311 Center. We also redesigned the lacity.org website to give it a modern look and feel. It has nice features, such as being able to watch our Channel 35 in real time and listen in on council meetings or committee meetings around the city.

Reneker: About 20 percent of our apps are in the cloud today, and we have a cloud-first strategy, so anybody who's going with a commercial off-the-shelf [COTS] solution should first consider a cloud-hosted solution.

We were one of the first to roll out Google Apps, and over the next five years, upwards of 80 percent of our development and COTS solutions will be hosted in the cloud.

StateTech: What type of digital inclusion initiatives does LA have?

Reneker: Rather than just send old PCs to our e-waste recycling center, we redirected those to a storage facility and worked with nonprofits to create a digital inclusion program. We'll recycle and provide the revenue to nonprofits that refurbish PCs for low-income households that don't have technology.

Getting 8,000 to 10,000 PCs out to low-income families is not going to be very useful if they don't have a broadband connection. We're trying to bring a 1-gigabit-per-second network to every residence, business, nonprofit and government institution here in LA.

While we are running fiber down the roads, why don't we replace the network for our 4,800 traffic signals, interconnect all city facilities and be an anchor tenant? We're exploring ubiquitous wireless coverage by attaching access points to streetlights every 500 to 1,000 feet. That will propagate some level of free or paid high-speed service for citizens.

StateTech: How is that initiative progressing?

Reneker: We received 35 submissions for our request for information that closed in July. Our legal counsel, I and a few others will digest the responses from that and build a request for proposal that we hope to go out by the end of the year.

StateTech: In what ways does the city plan to use technology for economic development?

Reneker: From an economic development standpoint, the fiber network is our biggest effort. We're one of the entertainment capitals of the world that creates video and audio content. You need high-speed networks to be able to accurately utilize it. We want to ensure that we have the ability to bring in new businesses here and support their infrastructure.

We've also hired a chief innovation technology officer, Peter Marx. Peter and I work together closely. While I'm dealing with operational issues, Peter is out there working on technology projects in conjunction with the private marketplace and being a liaison with the high-tech community.

StateTech: How did the Windows XP migration go?

Reneker: Out of 23,000 workstations, maybe 300 or 400 devices are still on XP. We went to Symantec and got their critical system support because we still have a few applications, such as a dispatch system and some legacy radio and microwave products, that are only on XP. For some apps, we also went with Microsoft's XP Extended Support. Over the next 12 to 18 months, most of those systems will be replaced.

StateTech: How is mobility changing the way the city does business?

Reneker: Well, obviously, it's significantly changing the way citizens interact with the city. Internally, our street crews are repaving or patching potholes. It's important for field crews to be able to close incidents as quickly as possible. Our street services have a mobile app that shows in real time when the repairs are done.

We're trying to move to a cloud-based helpdesk solution with a mobile component that will allow staff to close out trouble tickets and work orders in real time so we can track how fast we complete them.

StateTech: Are you working on any other mobile apps for employees?

Reneker: We have about 45 mobile apps right now. Most of those are public facing, so we haven't done any core development yet for internal staff. That will be where a big chunk of our focus is going to be.

As people are calling 311 or submitting their request and trouble tickets and work orders are issued, it's going to be extremely important that employees have the ability to see them on their mobile device and close them as quickly as possible. In that way, we can see what prevents us from cleaning up and resolving issues in a timely fashion.

StateTech: What other major IT initiatives has the city embarked on?

Reneker: We're installing a new procurement system and a performance-based budgeting module that will go live in November. We just rolled out a new open-data website for our mayor and controller called Control Panel LA that includes financial and payroll data.

We're expanding Mayor Garcetti's open-data site, GovStat, that reports on general government-related activities. By the end of this year, each department will have its own webpage with a matrix measuring performance. And we're rolling out Oracle Siebel customer relationship management in May to modernize our 311 operations.

We are also putting a Software as a Service bid out to Google and Microsoft Office 365. By the end of the year, we hope to have a decision on whether we extend the Google contract or swap out there.

And we're looking at replacing our phone system that's predominately Centrex and old PBXs and finally moving to Voice over IP.

VDI Serves Up a Uniform Experience for Teleworkers