In Pacific, Mo., a server failure crashed City Hall’s computers and networks for the better part of a day in late January, the Missourian reports. While City Administrator Steve Roth and the IT team were able to get the server back online, the city is now aiming to get a new server installed and working as soon as possible.

To prevent disasters of this type and improve efficiencies, cities all over the country are looking at large-scale — and perhaps costly — IT upgrades in the near future.

Upgrading the IT Infrastructure

While digital signage, video conferencing and other high-end display technology are probably the most visible and dazzling aspects of a city hall’s technology makeover, the most impactful enhancements often come from the back end.

“We’ve been talking about IT for a while,” Roth told the Missourian. “We have a lot of computers where we need hardware and software upgrades.”

With the new server, Pacific is hoping to usher in a complete upgrade of its IT system, including a Dell PowerEdge R900 server with a central processing unit (CPU), a hard disk controller, new hard drives and redundant power supplies.

In Biloxi, Miss., Mayor Andrew “FoFo” Gilich is looking to stay ahead of the game. He has proposed more than $850,000 in technology improvements that aim to improve efficiencies throughout City Hall by upgrading the city’s back-end hardware, email and wireless systems.

The technology improvements “will basically improve efficiency for city employees and the public conducting business with the city,” said Brandon Roberts, a member of the city’s three-person Information Systems Division. Improvements include moving from analog phones to an internet-based phone system, and having a dedicated Microsoft Exchange server to allow improved email service and networking among city departments.

Kicking It Up a Notch

Newer technology upgrades are also making a splash. The Los Angeles suburb of La Cañada Flintridge, for example, is gearing up to spend over $300,000 in IT upgrades this year, including a server upgrade, enhancements to the city’s geographic information system (GIS), and the acquisition of land management software, reports The Los Angeles Times.

"It's all about customer service," Mayor Jon Curtis told the Times. "People will be able to go online, look up zoning and other city information in a much more efficient way. Everything will be tracked online."

The staff will see a huge benefit as well. The new system will allow city employees to better integrate between departments and at the county level. Residents can submit planning documents online and staffers can email comments to residents, meaning paper documents are a thing of the past. Public records requests and permit violations can also be submitted and stored digitally.

In addition, staffers will have an aid in mapping and analyzing property information: An upgraded GIS will provide them with the means to access global imaging, overlaid with a map of the city’s zoning and utilities.

"There's an awful lot of work on the front end, inputting all this information, but on the back end this is going to be a huge benefit to the staff and residents," Susan Koleda, the city's deputy director of community development told the Times. "This is going to make life easier for staff, so I'm really excited about that." 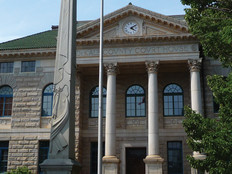