While technology and innovation hotspots are popping up in cities around the country, some residents are left without access, perpetuating skills gaps and drawing a digital divide.

Earlier this month, three mayors — each aiming to bring economic opportunity to all areas of his or her city — spoke out about their plans to invest in technology and foster an innovative environment across their neighborhoods at Governing’s 2017 State and Local Market Outlook forum in Washington, D.C.

In the Dallas suburb of Irving, Mayor Beth Van Duyne is working to attract technology startups and established companies alike to build a mini-Silicon Valley.

“No offense to California, but we’re excited in Texas that we’re beginning to see a lot of companies [previously harbored in California] now come to Texas … We are really pushing in our city for tech companies,” said Van Duyne, noting that Irving recorded its highest amount of growth in 2016, raking in $819 million in commercial development.

She credits this growth to geographic factors — the city is in the middle of the country and the international airport in Dallas makes it just a two- to three-hour flight from each coast — but notes that city leaders are also heavily investing time and money in creating areas of innovation.

Moreover, public-private partnerships are playing a huge role in the city’s startup development, including a partnership with Microsoft; the tech giant invested $12 million to launch its Microsoft Technology Center in Irving, which aims to be a hub for innovation, the Dallas Business Journal reports.

These centers are beginning to show results. For the second straight year, The Dallas-Plano-Irving area was ranked No. 5 among the nation’s top 25 best performing large cities, as ranked by the Milken Institute’s 2016 Best-Performing Cities report, which ranks the best urban areas for job creation and sustainment. A whopping 7,700 tech jobs were added in the region in 2015, Pasadena, Calif.-based Jacobs Engineering moved its headquarters to Dallas in October, and San Francisco-based Revel Systems opened a Dallas office last spring. With these migrations to the area, technology development is expected to keep pace in years to come.

Denver: Bringing Government to the People — Not the Other Way Around

“The greatest predictor of poverty is a lack of mobility options,” Denver Mayor Michael Hancock noted during the conference. In addition to improving transit across the city to open up economic access, the mayor has focused on using technology to offer greater transparency and to bring government to the people in the comfort of their own homes.

“We focused on ways to be a more efficient government. How we bring innovation in: putting our checkbook online in real time. If the mayor buys a chair you see the mayor buy a chair online,” the mayor noted.

The city has also moved to offer online options to citizens, turning to models of self-service government for its residents.

“I said to my constituents after I was elected ‘I love you, I think you’re good-looking, but I don’t want to see you downtown.’ You should not have to come downtown to file your sales taxes with the city government or to renew your driver’s license tags by coming down and standing in line for two hours. You can do that online now in the city of Denver,” Hancock noted. “You have to meet the people where they are.”

He also noted that the city has begun heavily investing in public-private partnerships to introduce new life to the business sector. “The city of Denver began to invest in opening up innovation centers. Inviting entrepreneurs to come in … we started investing in those all over the place,” said Hancock.

The city of Phoenix is investing heavily on transportation infrastructure: a 35-year, $31.7 billion plan that Mayor Greg Stanton believes will help close the city’s digital divide. The plan, voted on in 2015 and launched on Jan. 1, 2016, offers improvements to the city’s transit services, including 42 miles of new light rail, expanded bus and Dial-a-Ride services, and repaving of nearly 680 miles of major streets, according to the city’s public transit department.

“We’re tripling on our light rail with a program that will go right through South Phoenix, which is traditionally the poorest area of our city, to give people in that community the best access to education centers, education opportunities, employment and the opportunity to have the economic development that goes into the infrastructure development of that kind,” Stanton noted at the conference.

Stanton says the bill will enhance access to improved technology and help to close the skills and opportunity divide to emerging areas. It will allow residents to travel to innovation centers in other areas of the city, such as the University of Arizona campus, where the city has directly invested $200 million to build up higher education capital infrastructure. The city has also built a 30-acre bio-science facility that harbors the Arizona State University medical school.

“Income inequality and opportunities, I don’t believe those will be priorities for the incoming [Trump] administration, and so it will be up to mayors and cities to lead on those issues,” Stanton said. “Using our resources, our programs, our infrastructure to make sure everyone has a fair shot to participate in our economy.”

Like Irving, Phoenix is also looking to attract startups by launching incubators in their innovation district. They are also turning to open data to improve their government agencies and departments.

“Look at what we’re doing and tell us how to do it better, whether it be our transportation system, our public works department, and, if we can do real-time information for public safety, maybe even how to run our police department better,” said Stanton, speaking to the possibilities of open data. 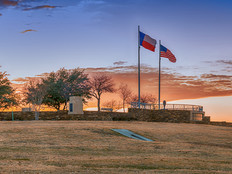