Leading the technology and innovation efforts of states is no easy task these days. Governments are prime targets for hackers, legacy systems desperately need upgrading, and the Internet of Things is morphing into the Internet of Everything. With so much to focus on, IT professionals need to set priorities.

Helpfully, NASCIO takes a survey of state CIOs every year to understand what is top of mind, and the result is NASCIO’s State CIO Top Ten Policy and Technology Priorities for 2017. At the NASCIO Midyear 2017 Conference this week in Arlington, Va., dozens of state leaders met to exchange ideas. In a lively session, five technology chiefs took about five minutes apiece to discuss how one of the top priorities is playing out in their states.

Providing an Enterprise Vision and Roadmap for IT

“In our state, the digital divide is certainly an issue that is quite intractable, and we’ve attempted to deal with it,” said Mississippi CIO Craig Orgeron. A large portion of the population lacks access to broadband, Orgeron added, so the state has made a strong push for a mobile-first strategy, with 168 applications developed in the past six years and 58 entities across government sectors supporting the effort. There have been 200,000 downloads of specific mobile applications, Orgeron noted. “In our state, this has been a way that government can provide significant meaning.”

Orgeron acknowledged the budget challenges in government, and said that public-private partnerships can help to overcome these hurdles. “Those allow capacity building. But to do that, you’re doing something somewhat different,” he said. “You have to have governance. In Mississippi, good governance is established in statute. We have legislative oversight for our digital government program. There are clear divisions of labor, and there are defined processes of who is supposed to do what.”

Michigan CIO David Behen recalled how the state’s governor tasked the public sector to become more efficient and effective — and to improve customer service — by using data and technology. “When he says that, who does that fall on? It falls on us, it falls on the CIOs, it falls on the IT team, it falls on our public and private partners,” said Behen.

With that mission in place, Behen and his team focused on three major categories: mobile first, Big Data and cloud technology. They developed MiPage, a free application that provides a “real-time link to all things Michigan,” Behen said. “It’s really a personal concierge for government services in Michigan. It’s what we think people should be using — personalized and predictive, any service, any device.”

Project developers relied heavily on data to provide customized interactions. “It’s all about data,” Behen told the audience. “How are we going to use data to fundamentally change how we provide customer service?”

The state made security a high priority for the project, Behen explained. “When you launch an app for 10 million people, if there’s a breach, you lose that trust and that confidence. So cybersecurity was something we really, really needed to focus on.”

The state has plans to launch a cyberthreat analytics center, using predictive analytics to figure out where future threats will come from. “Simultaneously, we’re going to put together a playbook to attack those issues,” said Behen. 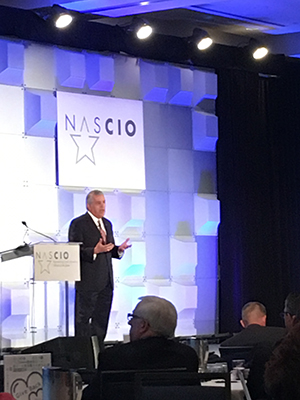 In Wisconsin, the governor’s priorities are jobs, workforce development, education reform, infrastructure investment and lean government, said state CIO David Cagigal. “Something that’s woven through all five of these is broadband services — connecting the state of Wisconsin so that these governing priorities can be achieved.” Gov. Scott Walker has held more than 70 listening sessions, Cagigal noted, and participants raised the broadband subject at nearly all events.

The state has several major broadband projects, including for schools, libraries and state offices, and Cagigal cited the importance of a working group made up of the private and public sectors, and the legislature. “We have an opportunity to bring everything together with this working group, in making sure that we have consensus.”

In California, the business-as-usual approach to IT projects has led to difficulties, said Chris Cruz, deputy CIO for the state. “We’ve had a project delivery process that was really based on legacy oversight and development,” he explained. “One of the things that would happen through the years is that we would develop these big monolithic projects, and they’d start with $100 million, go to $200 million, $300 million. … We’d get half way into these projects and all of a sudden we’d have something unforeseen happen.”

So the IT team has initiated an agile approach, which takes an iterative and incremental path to designing and building IT projects. “We wanted to also set up a methodology around agile, because we believe comprehensive planning leads to success,” Cruz said. “The more planning you do up front … the more you’ll be successful down the road.”

Among a number of agile elements, Cruz emphasized that involving business units early has been essential to success. “We think this is extremely important to get this done out in front, in the planning process, to mitigate any future risk to projects moving forward.”

“Virginia gets [cyber] attacked every three seconds, and also we have to block over 90 percent of our incoming email,” said Nelson Moe, Virginia’s CIO. One way the state is countering the threats, and promoting job creation, is with MACH37, an “accelerator” that aims “to facilitate the creation of the next generation of cybersecurity product companies,” according to the project’s website. The state also has a jobs portal dedicated to cyber careers.

Moe and his team are prepared for attacks and have response plans in place, he said. “We also track cyber trends at a high level, and then also tactically,” he added, noting that it has become less expensive for hackers to carry out their activity. “And weaponized ransomware is on the rise. Luckily, to meet this threat I have a really good relationship with my CISO.” 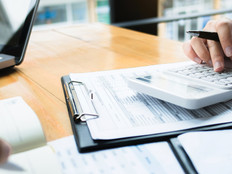