Rhode Island Secretary of State Nellie Gorbea says the state deployed 590 brand-new scanners and tabulators ahead of the 2016 election, replacing equipment that dated to 1997.

Among the many contentious arguments of the 2016 presidential election was the question of the security of the vote itself. Accusations flew, with claims that the election would be rigged or hacked in some way.

In part, those accusations were lent credence by the state of voting equipment in the United States. In many localities, equipment is approaching the end of its useful life; many states and counties last upgraded with the help of federal funding provided through the Help America Vote Act of 2002.

“As the 2000 election demonstrated, and now again, elections in general and voting technology in particular is a highly under-resourced and underappreciated part of our democratic infrastructure,” says Professor Charles Stewart III of the MIT Election Data and Science Lab.

Despite the lack of federal funding, and regardless of largely unsubstantiated fears of voting irregularities, many election boards now find themselves busily bringing voting systems into the future with a combination of reliable, redundant equipment that leaves a paper trail, and transparent ­procedures that involve the public in the ­safeguarding of election outcomes.

One state that’s leading the way is Rhode Island. Ahead of the 2016 election cycle, officials there replaced voting machines statewide, purchasing 590 new scanner/tabulators. The state ­purchased 50 ballot-on-demand printers made by OKI Data Americas for each city or town hall, helping reduce the likelihood that officials run out of ballots. And during November’s general election, about 14 percent of polling places eschewed paper poll books by participating in a pilot that used iPad devices loaded with custom software and mounted on swivel stands, which helped streamline voter check-in.

The machines that Rhode Island replaced were state-of-the-art — in 1997.

“The machines were completely beyond their useful life,” Secretary of State Nellie M. Gorbea says. Replacement parts were no longer in production. Maintenance contracts fully support the new machines, which have multiple redundancies that protect the voting results from being tampered with, Gorbea says.

“At the end of the evening — when the poll worker closes the polling station and turns off the machine — that ­generates a communication through a cellular modem that directly connects to the board of elections. That connection only happens after a polling station has closed,” says Gorbea. 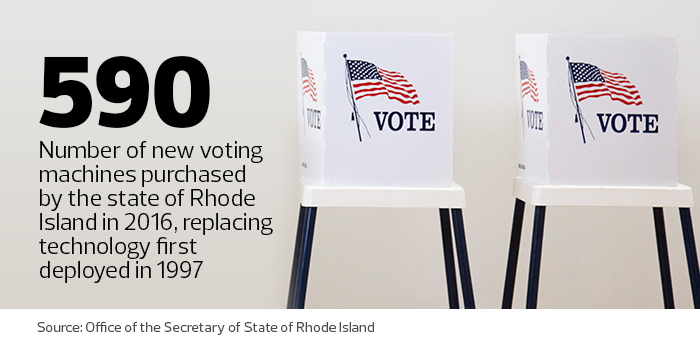 Using a cellular connection, rather than a wired network connection, protects against remote hacking.

The machine’s signal is double-encrypted, and it also prints a receipt simultaneously. Every machine includes a data stick that retains an image of each ballot counted. Finally, every physical ballot is retained, a measure that is paramount in the minds of skeptical voters who need reassuring, Gorbea says.

Along with the new technology, Rhode Island invested in basic improvements to make the voting system more user-friendly, such as redesigning the ballots and the state voter guide.

Despite the dire headlines, MIT’s Stewart does not see a crisis when he looks at the American voting system. By and large, machines are not breaking down; they are functioning as expected, but simply are no longer supported in terms of replacement parts and software updates.

And lack-of-confidence crisis among voters? Also overblown, he says.

“Voters, on the whole, are very confident that their votes are counted as cast,” says Stewart, who has conducted a national, post-election survey of voters since 2008. The difference between feelings in 2012 and 2016 was insignificant, he says.

Steps that Stewart recommends, and that Hennepin County, Minn., takes, are to publicly test voting machines ahead of election day and hold an open audit. Those measures increase voters’ familiarity with new technology as well as their confidence in its security.

Hennepin County — which includes Minneapolis and its 410,000 residents — upgraded its voting machines in 2013, choosing to invest in digital ballot scanning technology. The county runs a battery of tests to ensure everything is in working order before every election.

Michigan is also grappling with modernizing its voting equipment, but taking a slightly different approach. Rather than choosing a single technological solution, Michigan offers its county clerks an array of three options to choose from.

All three, however, rely on optical scanning of a paper ballot; important to note is that no internet connection exists with this scanning, thus protecting against remote hacking or tampering and making the vote easily verifiable.

“If ever there is a question about the integrity of the election results, election officials can perform a hand count of the ballots during a recount,” says Fred Woodhams, spokesman for the Michigan Department of State. “That’s the greatest benefit of using an optical-scan voting system. I’ve never heard of someone being able to hack a piece of paper.”

As states and counties ­continue to adopt new voting technologies, Professor Charles Stewart III of the MIT Election Data and Science Lab has advice to help guide their choices.

His first piece of advice: like Rhode Island, Michigan and Hennepin County (Minn.), ensure a verifiable paper trail of votes. Next come the dress rehearsals.

“Use the equipment and test it as vigorously, and on as wide a variety of your user base, as you can,” he says. The goal should be to ensure the system is usable and intuitive, not only for voters, but also for staff. In Rhode Island, high schools can host elections on the state-owned voting equipment, giving future voters a preview of the equipment well before they step into a real voting booth.

Less obvious advice, he says, is to ask vendors what sort of data reports can be gleaned from the equipment, such as rate of scan or what percentage of ballots were left partially blank.

“These are computers, and these computers are keeping track of themselves constantly,” Stewart says. “There’s a lot of data that’s available from the equipment that can give you insights, not necessarily into the election outcome, but into the conduct and management of elections.”

Rhode Island isn’t the only place experimenting with using electronic poll books to check in voters. About 68 percent of Hennepin County polling places used EPBs during the 2016 ­general election, with plans to fully switch countywide by 2018. Franklin County, Ohio, plans to roll out the technology this spring.

Many EPBs take the form of an iPad loaded with specialty software and are designed to speed the check-in process while reducing human mistakes that can cause alarm; other tablets or laptops may also be used.

“We’re discovering that the lion’s share of the rumors about dead people voting, people double-voting, people voting for other people, are due to clerical errors in using paper poll books,” says Charles Stewart, professor at the MIT Election Data and Science Lab.

And states and counties realize benefits beyond speed and accuracy.

“Paper poll books are very labor-intensive and costly to put together,” says Aaron M. Sellers, the public information officer for the Franklin County Board of Elections. “Especially in our county with over 843,000 registered voters, that’s a lot of paper.”

EPBs can also be kept secure from hackers in more ways than one. In Rhode Island, the EPBs use a virtual private network to communicate with the system back end over a private network connection; Franklin County chooses to keep its EPBs entirely offline on election days.