Government does not always appear to be driving innovation, notes Scott Gregory, chief digital innovation officer for the California Department of Technology.

But several technology-forward state and local governments are changing that.

New York City, for example, wants to be a worldwide leader in augmented and virtual reality. Meanwhile, California is driving innovation through a government-hosted State Innovation Lab and Texas has adopted a “cyber-first” government ideology.

Increasingly, state and local governments are working to stay ahead of the curve by adopting a technology-forward attitude. For some, that means officials are staying tech-focused in an effort to improve efficiency, cut costs and better serve constituents. For others, the focus is on attracting top tech companies and becoming digital hubs.

“There is a tremendous amount of innovation in government, especially in California,” Gregory says. Indeed, the state has enabled cloud computing for its police departments and Los Angeles has adopted smart parking meters in an effort make the best use of space downtown, along with several other initiatives.

To bolster tech advancement in government, California opened its State Innovation Lab in 2016, said Gregory, who also serves as director of the state’s Office of Digital Innovation.

“What we wanted to do was create a new conversation about open-sourced technology,” he said. “A lot of times we have this fear of failure in government. This is a place where we could experiment, prove technologies, test ideas. That’s a game changer.”

The goal, Gregory says, is to create novel, deployable technologies that address needs identified by state entity partners — with a particular focus on open-sourced technology. Already, the lab has helped identify an open-source solution to managing employee content and information.

California was the first state to launch an innovation lab and expects that others will follow suit as California evolves to be a thought leader and model for other government entities.

Meanwhile, New York City is seeking bids for what would be the first publicly-funded virtual reality and augmented reality lab in the United States. When completed, the lab will be designed to support early stage VR and AR companies with space, infrastructure and resources, provide shared access to tools and technologies, and strengthen the local talent pipeline.

“By taking a proactive approach toward this emerging technology, New York City stands to be a worldwide leader in a field with endless possibilities,” said Councilman James Vacca, chairman of the city council’s Committee on Technology, in a press release.

“We’re more invested in cloud that any other state right now,” he says.

The state is also an innovator in how it manages its virtual data center, which has multiple cloud providers.

Kimbriel says Texas has a consolidated data program that operates a private cloud in two data centers in different parts of the state. The state also is finalizing agreements with Microsoft, Google and other public cloud providers to manage connections from the state’s data centers to their cloud environments.

“This allows us to never have regulated data travel through the internet to get to these cloud providers,” Kimbriel says. “As far as I know, nobody else in the public sector is doing this.”

Through this arrangement, the state is able to “burst” its demand during high-traffic times, including during statewide elections that draw higher traffic to the election websites.

This helps to manage costs, Kimbriel says, because the state is only paying for increased demand in November, for example, rather than throughout the year.

Texas is also in the final stages of planning a digital government assistant that will operate similarly to Apple’s Siri and Amazon’s Alexa. The technology will use machine learning and voice command technology aimed at helping residents navigate government services more easily; it will also recommend other helpful services and allow users to customize the tone or character of the digital assistant.

“We envision that voice command, digital interactions such as texting, as well as cognitive computing, will all be part of the capabilities for this digital assistant,” Kimbriel says.

While the first release of the technology will be in 2018, Kimbriel expects there to be an ongoing release of features thereafter.

“The challenge we have is: How do you deliver more and more services to more citizens when you can’t hire more people?” Kimbriel asks.

The answer, he says, is enabling service delivery through technology deployment.

“Being forward-thinking about technology is critical in the state of Texas,” he adds. 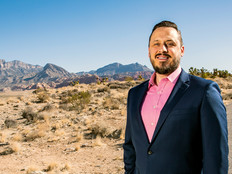