In North Dakota, CIO Shawn Riley seeks unification of his state’s IT services to speed citizen services through data.

Shawn Riley became CIO of the North Dakota IT Department in April 2017. In his time so far as state CIO, Riley has focused on taking his IT enterprise to the next level. That means unifying data sources and analyzing information on his state’s residents to improve their lives.

Anecdotally, North Dakota has seen results from this approach already in its response to the national opioid crisis. Data analysis is literally saving lives.

StateTech chatted with Riley at the midyear conference of the National Association of State Chief Information Officers (NASCIO) in Baltimore.

STATETECH: How is North Dakota making ­better use of data?

I’ll give you an example: Within the opioid crisis, a patient is delivered to a hospital. Where is that person coming from? That’s easy, right? Where are they getting admitted? That’s easy, right? They’re in the middle of an opioid event. That’s simple stuff. Everybody has that within health information exchanges across the United States. 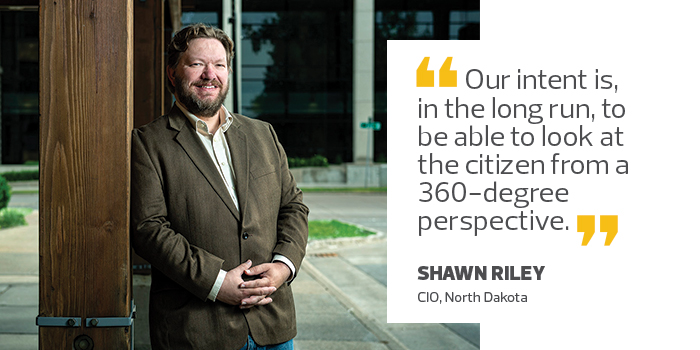 Then comes the question, how did they get there? We began with the assumption they were arriving at the hospital via ambulances. When we started pulling in saved data from all ­different sources, we discovered state patrol officers are bringing those folks to emergency rooms. So, we thought, “All right, so we put all the Narcan in the ambulances. Let’s put some Narcan in the officer’s car.”

We put it in an officer’s car, and sure enough, three days later, one of the officers saves the life of a kid when he was able to get the injectable on the spot. Those are the kinds of things we want to do with our data.

STATETECH: What does that look like in the end?

Our intent is, in the long run, to be able to look at the citizen from a 360-degree perspective. When a citizen comes in, we’ll be able to look at all the characteristics of that citizen, how those characteristics interact with different systems, and be able to actually help that citizen get to services faster, get off the services when they’re no longer needed, correlate that information then for policymakers, and be able to deliver that information for operations.

All of that is architected within a solution that sits in the cloud, which is today being used in a test bed that has both a private and a public blockchain to it that allows us to be able to do a public auditing component and a private auditing component. The public auditing would be something where you could do validations of data, accessibility and authorization, and the private side would still keep that data confidential as necessary for whatever mechanism garners that information. That’s the structure that we’re working through right now. We have a pilot that’s running. There’s a combination of partners that we have that are helping us work through it.

STATETECH: North Dakota’s economy has been faring well. As people migrate to the state for jobs, does that complicate matters?

The biggest challenge with a lot of data systems comes down to identity. We need to be able to ensure that individuals are precisely who we believe they are. If you go to an emergency room in Fargo, and then two months later, you’re at an emergency room in Bismarck, the health information network contains data that is critically important for your treatment. Identity is the critical component. That is the big challenge facing everybody across the United States right now: How do you ensure somebody is who you think they are so that you are certain that you have the right information?

STATETECH: Can you speak about moving away from the mainframes you have in service?

We really want to be on technologies that enable the way people are doing business today. We want to be enabling the citizen experience in a way that assists them, appears familiar to them and makes it easy for them. We also want to get things done in a more efficient way. 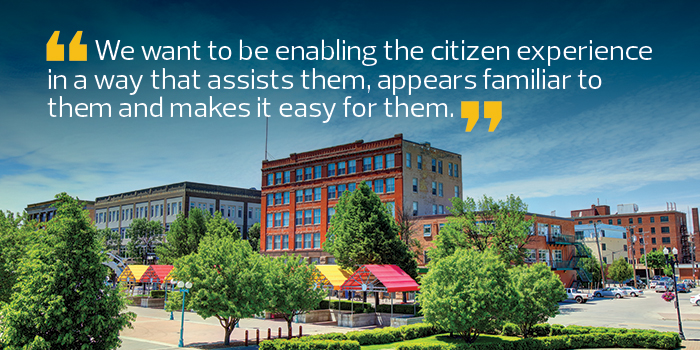 Right now, mainframes, in general, don’t really get us there. So, we can’t deliver mobile services. We can’t deliver with scalability. We can’t deliver with flexibility. All of those things have been limiting factors for us. The mainframe cost today is skyrocketing, because they simply can’t get the resources to manage their systems anymore. The technology’s well behind that, and then the delivery of services from those mainframes is not where we all want to be.

STATETECH: How does getting everything on the cloud empowers your unified data platform and distinguish North Dakota’s IT efforts?

Something to think about would be that most of the states are consolidating, and they are in the process of consolidation. We’ve moved a step past that. We consolidated back in 2003. We’re moving to unification now.

What does unification mean? Consolidation, in my mind, is bringing together all of your infrastructure services. Unification is bringing together all IT services. That’s something that we’re moving to in a major way. We have full support out of the executive cabinets, and we’ve been doing this since July of last year. We’ve got 17 cabinet agencies that are now working together to be able to bring together this unified singular IT organization, instead of the 17 different IT products that we have. That’s something that’s different than other folks are doing.