Smart cities are “bright, shiny objects,” said Frank Johnson, CIO of the city of Baltimore. Mayors and other city leaders want their IT leaders to pursue smart city projects as a way to attract organizations and businesses, which are looking to move where there is technological innovation and tech talent, he said.

Speaking Oct. 3 at the Smart Cities Week conference in Washington, D.C., Johnson noted that IT leaders are “under a tremendous amount of pressure” to undertake smart city programs, so much so that in many cities, existing IT work that had been ongoing has been reclassified as smart cities projects.

However, Johnson and other panelists said during an opening plenary session at the conference, for smart city projects to be successful, city leaders and IT managers must rethink how they fund such projects and collaborate with the private sector and other stakeholders.

DOWNLOAD: Find out why city governments need modern IT infrastructure!

IT Leaders Must Consider New Forms of Collaboration, Funding

Johnson suggested that city IT leaders need to “open our aperture” and recognize that city governments only have so much capacity to carry out IT modernization plans, like the one which Baltimore just recently unveiled. They need to work with businesses, technology partners, philanthropies and universities to achieve smarter cities that are more innovative and sustainable, he said. Unsurprisingly, this approach is championed in Baltimore’s modernization plan.

“Collaboration is hard,” Johnson said, and requires getting together groups of like-minded individuals who are passionate about something and ensuring that there is something that brings them to the table. Then, leaders need to get them to all row in the same direction.

Barney Krucoff, interim CTO of the government of the District of Columbia, said that collaboration requires a shared goal and not just a “symbolic relationship.” Wendy Gnenz, CIO of the city of Edmonton, Canada, said collaboration “changes every time you get together with someone. It could be win-win, it could be win-lose. It just means sharing ideas, thoughts, perspectives.” 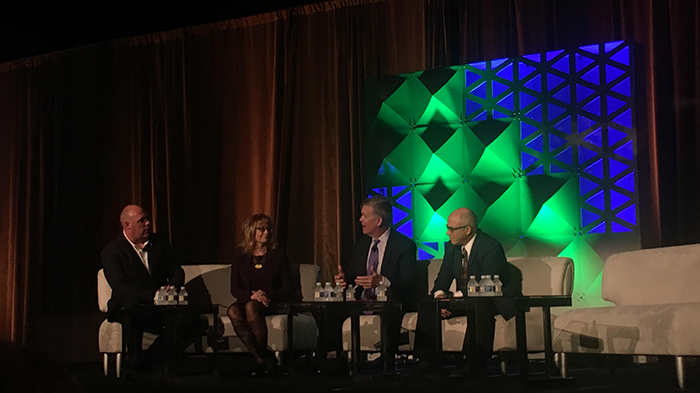 Gnenz said that it is important for municipalities to start exploring different business models and not just assume that they will be able to fund smart city and Internet of Things projects via traditional sources of funding, like property taxes. Cities should look to forge public-private partnerships, which, she acknowledged, is not that common in Canada.

“It takes some innovation, some agility to show a city council that this is the right way to go,” she said. Edmonton is pursuing this model with its Health City program, an economic development initiative designed to spur healthcare innovation.

Johnson acknowledged that such alternative funding models “aren’t quite obvious to us yet,” noting that Baltimore’s city government is a roughly 300-year-old institution that is used to raising capital based on existing procurement laws. “We have to reimagine the whole flow of money,” he said, noting that some cities could generate revenue from the electricity they generate on their own or by leasing access to city-owned dark fiber for broadband access.

MORE FROM STATETECH: Discover why successful smart cities focus on practical use cases!

Challenges and Opportunities for Smart Cities

The biggest challenge facing city IT leaders when it comes to smart cities is “losing sight of the fundamentals we need to every day,” Krucoff said. The D.C. government is running some systems that were created in the 1980s and deployed in the 1990s that need to be updated, including financial tools and department of motor vehicles systems.

Those are multimillion-dollar software upgrades that need to be addressed, he said, and smart cities programs can sometimes be a distraction from those fundamental IT challenges.

Johnson said the most significant risk with smart cities is a city putting all of its investment and effort into one area and then “swinging and missing.” He said cities should “fail small and quickly” because they cannot afford to make huge and costly mistakes with smart city investments.

In D.C., the next big IT challenge is upgrading those legacy enterprise systems that are all aging simultaneously, Krucoff said. In Baltimore, Johnson said the city plans to soon introduce tech upgrades that support its public safety community. “We have much to do,” he said.