Commercial organizations increasingly move as many applications to the public cloud as possible, but state and local governments resist these efforts due to security or budgetary concerns. Many agencies keep their sensitive or important apps running on servers controlled in-house. Keeping those applications available requires protection from malicious users and spikes in legitimate traffic.

The Barracuda Load Balancer 340 accomplishes those critical tasks and does so simply. When deploying a unit as an appliance, setup and configuration took less than an hour. Most of that time was devoted to setting rules for the 340 to follow when balancing traffic.

A single 340 can manage up to 35 physical servers, and the rules available for how to handle traffic are extensive. It supports both Layer 7 and Layer 4 protocols, including HTTP, Simple Mail Transfer Protocol, FTP, Transmission Control Protocol, User Datagram Protocol and others. It can even bridge requests and networks that span both IPv6 and IPv4 networking.

At the 340’s most basic level, administrators can ensure that traffic spreads evenly among all available resources. With three application servers, it can ensure that they are all operating at 33 percent load, for example. Or, one server can handle all traffic but then offload it to a backup once it reaches a certain threshold, such as 50 percent.

Route Traffic Based on Specific Devices or Locations

The 340 does a good job of monitoring not only traffic but also the applications that it’s helping to balance. This includes ensuring that the app is alive and responding. When I purposely killed an app on a test server, the 340 immediately routed all traffic to other instances where it was still working, per instructions.

Routing requests based on specific devices or locations, I could prioritize in-house staff over outside users, or elevate specific users, groups or client machines.

Not too long ago, deploying a load balancer was an exact science, but the Barracuda Load Balancer 340 provides robust protection against traffic spikes and unusual usage patterns, without requiring any advanced training. 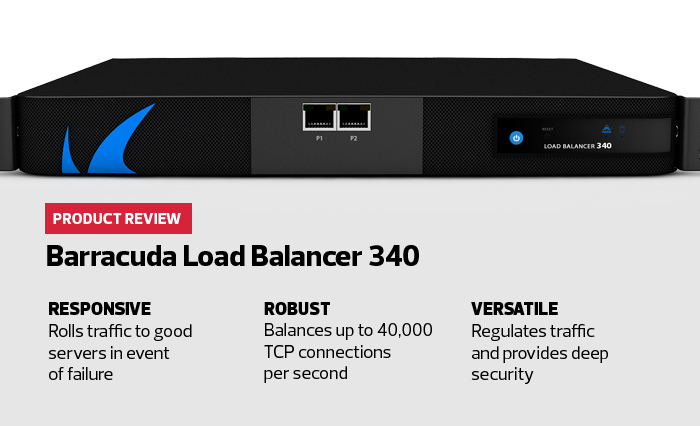 If all the Barracuda Load Balancer 340 did was regulate traffic to servers, it would be a valuable tool for any agency running mission-critical applications on physical servers. But the 340 also comes with several layers of security, making it a great choice and one of the strongest in its price range.

For starters, tying the 340 into RADIUS or Lightweight Directory Access Protocol authentication servers takes very little time. Thereafter, it can enforce access control on any resource or server that it is managing, ensuring that unauthorized traffic never even makes it inside the network.

Beyond authentication, the 340 automatically prevents the most common attacks such as SQL injection, cross-site scripting, cross-site forgery requests and others, keeping both users and applications safe from exploitation. And because it monitors traffic, it can control the number of requests sent to specific resources, halting denial of service attacks before they can get started.

Another option includes activating data loss prevention. That works by studying users and usage patterns on the servers. If outbound traffic suddenly spikes when it never did before, the 340 can prevent any data from leaving the network, or ask for human authorization of that activity before allowing it to continue.

All security features of the 340 are continuously kept up to date. Barracuda maintains more than 150,000 sensors around the world that report on suspicious activity or evidence of new attacks. The company evaluates that data and pushes new definitions out to users, keeping those appliances aware of the newest kinds of attacks and ready to stop them at the gate.

Users get a lot of useful features with the Barracuda Load Balancer 340, both in terms of traffic control and security. That more than justifies the comparatively low price tag. This load balancer is ready to begin helping any state or local government that needs to balance and protect traffic moving through its mission-critical servers.