Because state and local governments need to interact with the people they serve, their agencies are often geographically dispersed so that citizens don’t travel far to obtain services. That’s great for citizen interaction, but makes it difficult for employees at remote offices to collaborate with their colleagues.

Videoconferencing systems can bridge that gap, but traditionally have been prohibitively expensive — and have required dedicated space. The Logitech Rally system breaks this mold. It’s packed with professional features, such as a 15X zoom that creates sharp images, yet it can operate in almost any environment. It even performs well in places where environmental factors, such as large windows with streaming sunlight, would typically harm image quality.

MORE FROM STATETECH: Find out how the Georgia Department of Public Health extends access to specialized health care via telepresence tech.

One secret to the system’s success is the Logitech Rally camera. It can capture resolutions up to 3840x2160 (4K Ultra HD) at 30 frames per second, which is film quality. Step down to 1080p resolution (Full HD), and you can bump the frame rate up to 60 fps. If you need better-than-live quality, use the 4K setting. Either way, your meeting or presentation will look amazing.

The camera is more than just a high-quality, static device. It’s intelligent, almost like a miniature director. Thanks to its motorized stand, it can tilt and rotate, pan and zoom, and it automatically focuses on meeting participants.

I tested the system by starting a meeting with two presenters and then expanded to include a third person who came in late. As soon as the third person talked and moved, the camera zoomed out to include her automatically. 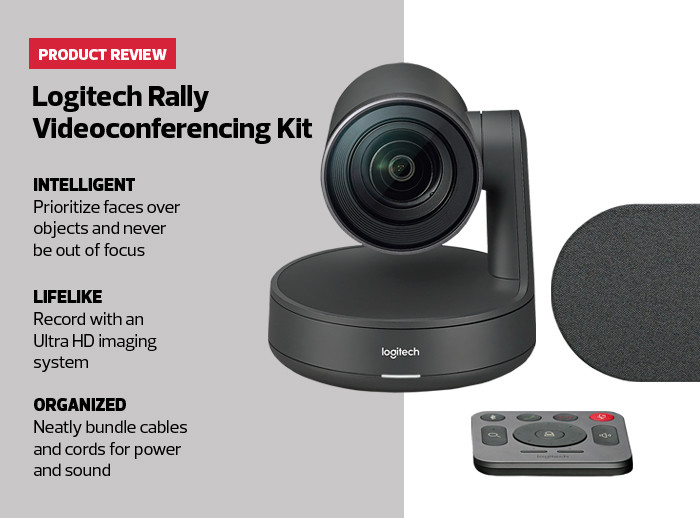 The Rally system comes with a remote control for manual camera adjustments. But in my testing, it always captured the best shot alone. It even knows to point down when not in use, so it won’t accidentally capture something it shouldn't.

The Rally easily integrates into teleconferencing programs such as Google Hangouts Meet, Microsoft Skype for Business, Microsoft Teams and Zoom.

The Logitech Rally videoconferencing system holds its own with dedicated in-room meeting systems. Yet it won’t break the bank, and performs many of its functions automatically — no director or film degree needed.

One of the biggest reasons the Logitech Rally videoconferencing system is so impressive is the RightSense software that powers its automatic operation. Here’s how it works.

I ran tests of the system in several locations. Most of those places were not optimized as meeting rooms. They were either too dark or had too much sunlight, or were cursed with a lot of background noise. And yet, the meetings held using the Rally system always looked like professional — and professionally filmed — gatherings.

The secret to filming the perfect meeting is Logitech’s RightSense technology, which automatically performs directorial and post-production functions, such as panning and zooming the camera, or reducing the amount of background noise while focusing on the speaker’s voice. As a bonus, the system is completely automatic, so meetings and videos look great and require almost no work to get there.

The RightSight camera control is the heart of the system. It automatically frames meeting participants, adjusting as needed when new people begin to speak by panning and zooming to frame them perfectly.

RightSound does for audio what RightSight does for video. It optimizes voices by suppressing background noise, and it can autolevel voices so nobody is talked over in a roundtable discussion.

Last but not least, the RightLight component balances light and optimizes color to prioritize facial features. It captures skin tones accurately, even in dimly lit or backlit spaces. We filmed meetings in a variety of conditions, with people of different complexions. Nobody was washed out or lost in the shadows. In fact, everyone looked amazing when presenting in front of the Rally videoconferencing system.

We achieved great results in our test meetings every time, with little or no effort. Even a dedicated meeting room system can’t always do that. But it’s easy with the Logitech Rally, where perfect meetings are a plug-and-play away.