Everyone knows from movies and TV shows that when you dial 911 on your phone, an operator picks up and usually responds with, “911, what’s your emergency?” But how does that call get routed and what happens after callers have described their emergency situation?

A movement underway across the country is seeking to modernize and upgrade the entire 911 experience and the technology infrastructure behind it. The goal is to make it easier for callers to transmit richer and more detailed information about their emergencies, and for staff at 911 call centers, known as public safety answer points, or PSAPs, to then provide that information to first responders.

The effort, known as Next Generation 911 (NG911), is an initiative designed to enhance the infrastructure that underpins the 911 system, and switch from legacy circuit-switched voice to IP-based networks. One of the goals of NG911 is for callers to be able to transmit pictures and videos to 911 operators via their mobile devices. States have made varying levels of progress on transitioning to NG911 systems, according to the National 911 Program.

“Legacy networks have always been considered a closed network and the ability for citizens, PSAPs and first responders to share relevant call data has been limited,” says Ed Reuter, executive director of the Indiana Statewide 911 Board.

The implementation of all NG911 systems — including the Emergency Services IP Network (ESINet), Next Generation Core Services and the use of customer-premises equipment — allows those “stakeholders to share a large amount of data that could be critical in an emergency response. Citizens’ use of technology in their daily lives can then be used in an emergency,” Reuter adds.

MORE FROM STATETECH: What’s next for the FirstNet network?

What Is NG911 Technology?

April Heinze, NENA’s 911 and PSAP operations director, notes that in legacy environments, 911 call centers get very little information and call center operators’ intake screens can only accommodate 512 characters (including spaces). PSAPs receive limited location information, which makes it difficult to direct first responders to callers, especially if they are calling from smartphones inside buildings.

Kevin Morison, COO at the Police Executive Research Forum, says NG911 is really about “bringing the country’s 911 system into the 21st century.”

“Think about it. Almost everyone in America today carries around a smartphone — an incredibly powerful communications tool that allows them to connect with the world,” he says. “But when it comes to contacting emergency services in almost every jurisdiction in the country, the only thing people can do with that smartphone is dial three digits and talk with a call taker. NG911 will open up a whole range of possibilities and opportunities for the public to communicate and share valuable information with public safety.” 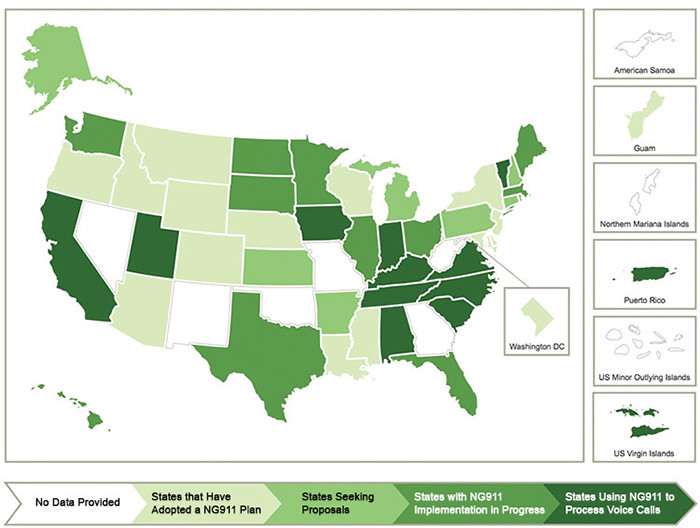 The combined data, from the National 911 Profile Database and NENA’s NG911 database, provides a snapshot of each state and territory’s progress toward fully utilizing NG911 infrastructure and capabilities. Source: 911.gov

Pat Lustig, NG911 project manager for the state of Oregon, notes that NG911 requires different protocols than legacy 911 systems. He notes that legacy 911 uses multifrequency protocols. All NG911 calls need to use session-initiated protocols, or SIP, which can take multimedia information and deliver it to an aggregation point so that it can be sent to a 911 call center.

NENA lays out 11 factors that PSAPs need to meet to consider themselves fully capable of delivering NG911 via an all IP-based telephony system with a corresponding IP-based Emergency Services IP Network, or ESInet.

Among them are that all calls entering the ESInet are SIP-based, and that gateways, if needed, are outside of or on the edge of the ESInet. Additionally, DSL providers, fiber network providers, wireless carriers and other access providers need to install, provision and operate some kind of location function for their networks.

NENA notes that location functions are “critical for 911 calls originating on an IP network because it provides a 911 valid location to IP clients that bundle their location in the SIP signaling to the ESInet.” All calls entering the ESInet will normally have location (which might be coarse, like the cell site or sector) in the signaling with the call.

VIDEO: Discover how Opelika, Ala., has configured the city's network to automatically back up body camera video wirelessly and make it available upon demand.

What Are the Benefits of NG911 Technology?

Although upgrading to NG911 can be a costly, time-intensive process (Abley estimates six to 18 months on average for a deployment), its proponents point to numerous benefits of the switch.

Additionally, Morison notes, NG911 enables “the opportunity to collect more detailed information, in multiple media, from the public about situations taking place in their communities.”

NG911 technology enables PSAPs to receive text messages, which is important, especially in situations where a crime victim or witness cannot easily carry on a voice conversation, Morison notes.

The true power and potential of NG911 rests in the ability for PSAPs to collect photos and especially videos of unfolding incidents — fires, a car crash or a potential act of violence — so that the information can be relayed to first responders.

When the public can supply “detailed, highly visual information about these types of incidents” to 911 call centers, which can then relay that information to first responders, the police officers, firefighters and EMS workers will be “in a much better position to respond safely and effectively to that emergency,” Morison notes.

NG911 will also allow individual PSAPs to connect via IP-based broadband networks, which will “dramatically improve their ability to manage 911calls, especially during natural disasters or other major critical incidents,” according to Morison.

If one PSAP is overloaded with calls or goes down entirely for some reason during a disaster, calls that would normally go to that center could be automatically routed to another PSAP. The state of Vermont already has this type of IP network among its eight 911 centers, Morison notes, which “proved to be crucial in 2011 when tropical storm Irene caused major flooding in the state and completely knocked out one of its busiest” PSAPs. As a result of NG911 infrastructure, calls were rerouted and no calls were missed, Morison says.

Frank Kuchta, state 911 program manager in Oregon, notes in the case of a hurricane threatening a coastal area, NG911 can enable PSAPs to reroute calls before the storm hits to 911 call centers further inland.

MORE FROM STATETECH: Find out how the Chicago Police Department is partnering with Samsung to turn officers' mobile devices into computers they can use in the field.

There are new players coming into the NG911 technology market, Oregon’s Lustig notes, for everything from call taker equipment to 911 workstations and customer-premises equipment. However, he says, many legacy vendors have transitioned to IP networks.

Kuchta says there are new vendors in supplemental services, such as telematics and improved location services. However, core NG911 services are still provided by large carriers, such as CenturyLink and Verizon.

Indiana elected to have two vendors operate redundant ESInets and provide Next Generation Core Services across the state, according to Reuter.

“The deployment methodology is for each of the vendors to operate their respective ESInets in their service areas while maintaining the ability to provide NG911 services statewide to all 122 PSAPs,” he says. “The vendors, AT&T and INdigital, will connect their ESInets at the core and serve the entire state. In the event there is a 911 outage by one of the vendors, the other will be able to provide continuous service.”

The National 911 Project has developed NG911 procurement guidance for PSAP managers to follow as they begin to upgrade legacy systems.

Implementation on NG911 can be challenging in the IP-based environment, Morison notes.

“And while individual jurisdictions can certainly go it alone, I think jurisdictions will probably achieve better results when they work together on implementation,” he says. “Vermont is a good example of that. So is the consortium of 13 largely rural counties in southern Illinois that came together in 2015 to create a regional IP-based network connecting 17 ECCs. And the states can and should be playing a major role in the planning and funding of NG911 systems.”

Reuter notes that, in Indiana’s experience, the best deployment for an ESInet and NGCS is through a statewide program. “This design allows all PSAPs to provide the same level of service in all 92 counties,” he says. “A statewide deployment with single-entity oversight allows the state to provide for and purchase services that are more consistent and at an economical advantage.”

The state established open dialogue with all stakeholders in local jurisdictions and engaged with those public safety officials as part of the process, he says, noting that giving up control to a state agency provides “a huge cost savings for the local officials.”

Indiana’s transition has not been without hiccups. “While the industry tells us that NG911 brings seamless integration and sharing of information, we have experienced connectivity issues in protocols and security,” Reuter says. “A statewide program more readily works through those issues and concerns than multiple local agencies trying to achieve NG911 services.”

The experts the Police Executive Research Forum has consulted on NG911 have been “nearly unanimous” about one thing, Morison says: The technology is probably the easiest part.

“The basic technologies and tools for setting up IP-based networks already exist, and they work,” he says. “The much more difficult part of implementation involves the policies, business flows and processes, training and other personnel issues, and governance needed to support the new technology.”

Agencies that want to fully embrace NG911 need to figure out what kinds of multimedia to accept, which staff gets to handle such calls and vet the information, what skills or training are needed and how to pay for NG911.

That includes “not only the initial capital expenditures, but also ongoing operations and maintenance and any new expenses related to hiring and training personnel,” Morison says. “Together, these and other issues represent far greater hurdles than the technology itself.”