The dream vision of smart transportation and urban mobility projects is to have autonomous vehicles connecting to and constantly communicating with sensors placed around a city and its surrounding region, moving traffic more efficiently and safely.

Most smart cities are still in the very early stages of that journey. Speaking Tuesday at the Smart Cities Connect 2019 conference at National Harbor, Md., transportation and smart city officials from a range of cities across the country said that for smart mobility projects to be successful, cities need to build and leverage underlying infrastructure and data sets.

Jordan Davis, director of Smart Columbus at the Columbus Partnership, said that “the connected vehicle environment will be the new normal” and that the goal is to figure out how to not just pilot such programs but scale them, not just in cities but in the surrounding region.

Columbus, Ohio, is a hotbed of smart city activity, and it’s made a name for itself with its burgeoning smart transportation programs. Three years ago, the Ohio city won the highly publicized Smart City Challenge, a nationwide contest put on by the U.S. Department of Transportation, which came with a $40 million grant.

The core of the city’s efforts is the Smart Columbus OS, a data management platform Columbus built from the ground up with modern architecture, Davis said. Data is the backbone of the OS, which serves as an integrated data exchange that combines public- and private-sector data.

The OS is designed to be used by others in the region, support the data ingestion needs of the U.S. DOT grant projects and facilitate agency efficiency for city governments, Davis said. The goal is to create a viable regional data platform and pull in data from across the region. Columbus wants to scale and sustain the platform to finance continued investment in smart city projects.

“It’s built for the world of IoT in cities,” Davis said. “So you can agnostically manage all of the real-time data in the city.”

Columbus is investing in some building blocks that are “no-regret bets,” like electric grid modernization, installing electric car charging stations and creating a connected vehicle environment across 179 intersections and 4,200 cars, trucks, and buses, which the city anticipates will be connected in the region by 2020.

In addition to pilot projects like a self-driving shuttle, Columbus has invested in a culture shift to make smart transportation reality, Davis said. That includes aggressive electric vehicle adoption for the public and private sectors, creating simple and integrated solutions, and adding different modes of transportation beyond personal vehicles.

Cities Can Use Existing Infrastructure for Transportation Projects

Officials at the conference emphasized that they plan to use existing network and physical infrastructure to make their transportation systems smarter.

Tara Reel, transportation and transit planner for the city of Virginia Beach, noted that the city is where five transatlantic communications cables connect to the mainland United States. The city wants to use a ring of dark fiber to enhance its smart transportation projects. 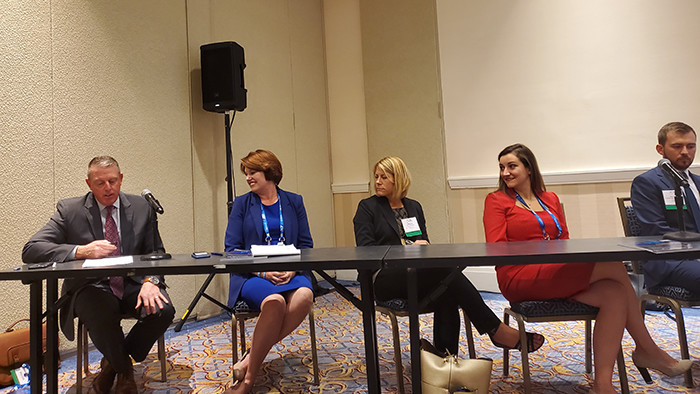 Virginia Beach is working with the Safety through Disruption University Transportation Center at Virginia Tech to maximize the benefits of disruptive technologies such as connected and automated vehicles, big data analytics and Transportation as a Service.

The city, which consistently ranks in the top 10 crash cluster locations in Virginia, wants to set up a smart corridor with 22 intersections to collect data and make transportation more efficient. A long-term goal, Reel said, is to use a cloud platform to collect and analyze all of the data the city collects.

John Jackson, city manager of Greenwood Village, Colo., used to be the city’s police chief and thought that transportation was something the city could fix easily. “Public safety is easier, trust me,” he said.

The city has chosen to focus on improving roadway infrastructure, transportation demand management and technology. However, he noted, the city has more data that it can handle. The goal is to get a better handle on the data that the city has already, he said.

“We need to know what we have and that what we’re utilizing is working before going any further,” he said, adding that Greenwood Village does not want to merely chase “the next shiny object.”

All cities have common infrastructure, such as streetlights and traffic signals, Jackson said. “We need to find ways to use current infrastructure in a smarter, better way,” he said, noting that control of the power grid is key.

Reel agreed and said that cities need to make the existing infrastructure they have smarter and work with their traffic management centers. She also hinted at the power of edge computing and putting sensors in cabinets and other IT facilities in the city.

Since technology changes so rapidly, Reel recommended that cities start small and scale up in technology deployments. However, she also said cities need to build cloud architectures from commercial providers like Microsoft to gather data and serve as long-term platforms for data analysis.