State government agencies have been making steady progress in maturing their use of cloud technologies over the past several years. Agencies’ use of the cloud and modern application development has been turbocharged by the demands the coronavirus pandemic placed on government services.

“There is a steady move in that direction, with a dramatic change in attitude as a result of the pandemic,” Center for Digital Government Executive Director Teri Takai tells Governing. “Folks are moving much more quickly. They recognize the value of the cloud, and a lot of the early concerns have been put aside because they just needed the capacity.”

IT leaders at agencies have quickly discovered that cloud tools are useful for more than just basic services such as email and storage. Cloud-based applications have the ability to scale in ways that legacy apps do not, and that is essential when demand for services skyrockets.

States were hit by a deluge of unemployment claims last year, and cloud-based tools have been used (for example, in Wisconsin) to help process them more quickly. As states look to build the foundation of modern digital government and invest in ways to be more agile and responsive to citizens’ needs, IT leaders should consider how they can foster the ability to rapidly create cloud-based applications using modern software development practices.

This can be done either in house or by working with outside partners, but the time is ripe to consider how to build for the future. Recent examples show how such an approach can benefit citizens. 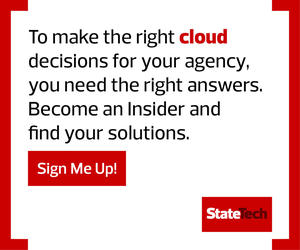 How Oregon Addressed a Flood of Unemployment Claims

Early in the pandemic, the Oregon Employment Department faced a crush of unemployment insurance claims, and its legacy systems could not keep up with the demand.

To fix the issue, Oregon contracted with Google to set up a cloud-based portal that “allows the agency staff to link claims to the agency’s mainframe computer system, which handles benefit payments,” as Columbia Gorge News reports. In that process, IGNW, a CDW company, played a crucial role in connecting those systems. It was able to tie the Oregon Employment Department’s legacy PDF forms to Google Cloud, which rapidly sped up claims processing. Prior to the change, applications for unemployment insurance were coming in one by one via PDF, and a staff member was reading them.

The Oregon example shows many legacy applications that have been around for years performing the same function can be automated. Modern applications can also leverage chatbots that can answer frequently asked questions and then connect to a human staffer for more complex queries.

Another aspect of the drive to modernize is that many state and local government IT staffers do not understand the power of the data they hold once it is placed in the cloud and analyzed with AI-based analytics tools.

MORE FROM STATETECH: How has the pandemic opened doors for cloud-based data collection and analysis?

Such an effort is not easy, especially if government application developers are accustomed to developing apps only in established languages such as Python.

While the term software-defined data center has become ubiquitous, the framework of virtualized infrastructure can indeed serve to develop modernized applications. Such efforts are necessary for government to rapidly develop new citizen-facing services.

IT teams and government application developers can leverage tools such as infrastructure as code to create infrastructure on demand in the cloud using software. However, if government agencies do not have the expertise in house to do so, they turn to experienced partners, such as CDW and IGNW, for help.

Two tools can be very useful in this regard. One is infrastructure as code tools from HashiCorp, which can be used to navigate multiple clouds and on-premises infrastructure from a code perspective. Another is a Contentful headless content management system, which is a cloud-based, product-focused CMS.

Partners can use these tools to write scripts for agencies to modernize and automate application development. All of this can be used to speed up the development and deployment of cloud-based applications.

While such tools have the ability to create modern apps, IT teams need buy-in from C-suite leadership and elected officials to drive such initiatives forward. Citizens are demanding more responsive, easy-to-use government services, and agencies have the technology tools available to deliver those. However, agencies need to commit to make modern digital government a reality.