Elyse Cutrone of the Developmental Disabilities Institute in New York uses an iPad to work with clients.

The 5-year-old boy couldn't speak, so he flipped through the pages of his picture exchange communication system (PECS) book to point to his name. Before he could find it, though, the child who greeted him lost interest and moved on.

"He just couldn't get to his words fast enough," says Elyse Cutrone, an education coordinator for the young autism program at the Developmental Disabilities Institute, an agency on Long Island, N.Y.

Soon after, DDI began using Apple iPod Touch devices loaded with a communications app called Proloquo2Go. The boy who couldn't get to his name fast enough with his PECS book quickly learned to navigate the app's folders and find pictures to represent the words he wanted to say. Each click would yield a natural-sounding voice that spoke the words on his behalf.

Before long, the child was using the app to communicate to anyone who would listen about his favorite colors, foods and movies (Cars topped the list). Then one day, he said the word "car."

"We threw a party," says Cutrone. "We told him we'd buy him any car he wanted."

She and her colleagues have witnessed similar breakthroughs with other clients since introducing the iPods — and, eventually, iPads — with AssistiveWare's Proloquo2Go and Pictello apps. They're just a few of the assistive technologies that support people with disabilities. Screen readers, communication tools and task-management aids are helping agencies like DDI make strides with clients of all ages.

Not only has Proloquo2Go helped the children at DDI communicate more efficiently, but it has served as a consistent verbal model, prompting more children to speak on their own, says Cutrone. When children used the PECS books, staff repeated their requests (for instance, "You want a ball"), but their voices, tones and words varied. The app sounds identical every time, making it easier for the children to imitate.

"It's just been amazing, seeing the progress our students have made," says Cutrone. "They have been able to acquire a voice." 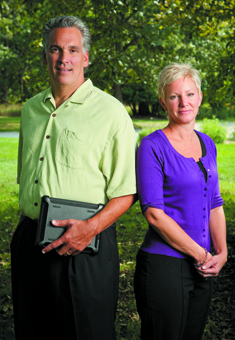 Community Mental Health Services of Muskegon County, Mich., began using Apple iPads last summer. The first app used was similar to Simon, the electronic memory game in which players repeat patterns of lights and sounds. One nonverbal client who has a strong musical sense took to the game immediately, says Jill Bonthuis, site supervisor at the agency's Wesley Roberts location. "He can go further than most of us," she adds. "It was almost like he was communicating with it."

People use different parts of their brains when learning, so the variety of applications available on tablets helps therapists tap into the varied strengths of clients — adults with a broad range of developmental disabilities. Clients use apps that teach them about financial management, safety skills, even fishing and making doughnuts. The agency also uses memory games and video and photography tools on the iPads when working with clients who suffer from dementia and Alzheimer's disease.

"There are so many tools we have yet to discover," Bonthuis adds. "I find it very exciting in that sense."

Many people with physical disabilities find the tablets easier to use than traditional computers. "They can just give a quick swipe with their fingers, and it leaves room for error," says Bonthuis.

Organizations around the country have found success using iPads to aid individuals with disabilities, according to Marty Exline, director of Missouri Assistive Technology, an organization that helps agencies, schools and individuals implement and fund adaptive technologies. While iPads are not a solution for all disabilities, they can help some nonverbal people communicate, provide touch-screen interactive keyboards for those with limited motor control, offer audio or alternative-text books for people with learning disabilities and help those with autism interact and understand their world, he says.

While some of the IT staff at Muskegon County Community Mental Health were hesitant to implement the new devices, they learned to use them quickly. Now the entire staff excitedly searches for new apps to introduce to their clients.

While the options available on tablets can be beneficial, there is a potential downside: Clients, many of whom are trying to learn to communicate and interact with others, could withdraw into the devices. “Too much can take away the social aspect of the activities if they’re only focused on a machine,” Bonthuis explains.

Instead of giving clients their own devices, Community Mental Health has one tablet for each group of 10 to 12 individuals. “They obviously couldn’t all huddle around one iPad to see what was going on,” explains David McElfish, IT director for the agency. His

department uses Apple TV, which lets users stream content from their com­puters to an HDTV device, combined with AirPlay, which connects iPads, iPods or iPhones wirelessly to Apple TV and mirrors the screen on the device.

Bonthuis adds that such a solution becomes social and also affords the opportunity for learning. “When clients go into a work setting, they need to know how to get along with others,” she says.

Another word of advice: “Invest in a good case,” says Cutrone. She also recommends screen protectors, particularly when working with children. DDI puts straps on its iPads so kids can carry the devices themselves.

“We definitely want them to take ownership and feel like it’s theirs,” says Cutrone. “It’s their voice.”

Download our Mobile Strategies for Government whitepaper for more information.