The drive to make governments go paperless has been afoot for several years now, but within the construction and development sector, e-construction is giving state transportation agencies the building blocks for greater productivity.

Recently, Mark Fidelman, a software marketing expert, in partnership with Pavia Systems, a software company that specializes in supporting the transportation community, published a survey that analyzed the traction and impact of the e-construction trend among state transportation agencies and industry vendors and consultants. Fidelman highlighted some of the survey’s findings in a post on Forbes.

One major initiative that stood out from the results is e-Construction, which the industry defines as technology and processes that eliminate the need for paper. For example, construction management and documents are digitized and quickly distributed to stakeholders through mobile devices instead of the glacial pace of paper-based document distribution.

Of the 185 respondents, 54% either have piloted or adopted e-Construction tools for use in building U.S. roads, streets, highways and bridges. Of those in the adoption category, 60% of the DOT respondents reported on-time deliveries for most 2015 projects, according to the original contract schedule. This compares to 36% of DOT peers who didn’t use e-Construction in 2015. Moreover, 68% of DOTs that have adopted e-Construction tools reported that at least 76% of construction projects were delivered on budget, according to the original contract.

So if data suggests that agencies that deploy e-construction collaborate more efficiently and accomplish projects in a more timely manner, why isn’t every single transportation agency jumping on the e-construction bandwagon?

By its nature, much of the work that happens with constructing highways and roads is out in the field and not in the office. In the era before e-construction, this work relied heavily on paper, which was consolidated and processed at the office. But with field workers empowered to access documents onsite and approve different aspects of the project in real time, things move at a much more rapid pace.

However, that doesn’t mean that the move to e-construction by transportation agencies is without challenges.

The two biggest hurdles agencies face is the fear of change and the fear of technology, according to the survey. 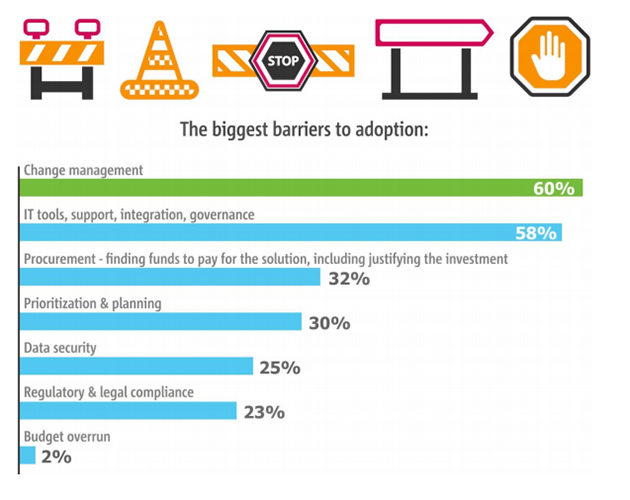 “The big effort for us in going from a hard copy world to a digital world, is really a matter of getting people up to speed who might not really be wild about the computer, quite frankly. I think moving to tablets has the capacity to have a huge impact to how we do business and really offer a lot,” said Freeman Anthony, City of Bellingham Works project engineer in the survey. “I think it's being utilized, probably 60% of what it could be, by virtue of the users. Field inspection staff at a city level do use it, but they are less inclined to really get wound up about it or to really look into what it can do.”

For some agencies, getting leadership to wrap their heads around doing things differently requires coaxing and coaching.

“Some of the mindsets in upper management that are not familiar with some of these tools or practices tend to oppose it and protect the old system of doing things. It just scares them a little bit,” said Doug Yearsley, Idaho Department of Transportation project engineer in the survey.

But given the benefits highlighted in this survey, IT leadership should be able to make a strong case for moving toward e-construction.