The Dell XPS 13 (9350) was created with professional travelers in mind. It packs a host of productivity-enhancing features, like a nearly edge-to-edge display, an optimized touchpad, backlit keyboard and powerful processor, into a light frame that is significantly more rugged than others in its class.

With an LCD tuned to a higher color and contrast ratio compared with a standard display, the XPS 13 makes graphics, text and charts more readable in all types of lighting conditions, from office fluorescents to direct sunlight.

The LCD also displays images natively at 1080p, so users get full HD resolution without any tweaking. A superthin bezel means users can work right up the edges of the 13.1-inch screen. 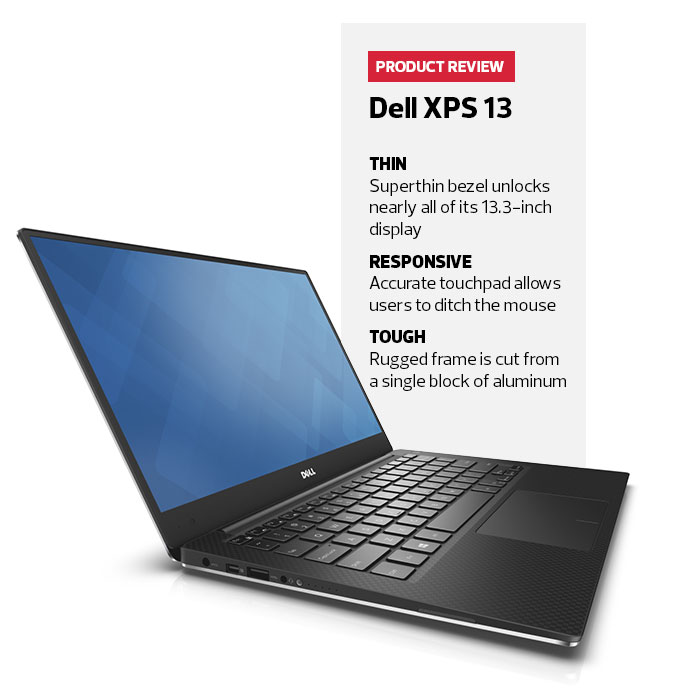 One of the most frustrating things about government or business travel is that sometimes, even with the right gear, the conditions simply aren’t conducive to getting work done. It might be too bright or too dark, too bumpy or too cramped. While the XPS 13 can’t overcome every obstacle, we found it better than most within its class.

Darkness is a surprisingly tough obstacle to overcome for most notebooks. Whether trying to take notes in a darkened presentation room or working in the back of a vehicle at night, there is not a lot most notebooks can do. If you happen to be working on an application with a lot of bright colors or white space, you might be able to brighten the screen enough so that some light spills out to the keyboard, but often that’s not enough. With the XPS 13, a backlit keyboard is standard. When the lights went out, we simply activated the backlight and could see every key clearly. You don’t often get a feature like that on a notebook at this price point, so it was a nice surprise to find that we no longer had to be afraid of the dark.

Sunlight presents other problems. Sitting on a train with large windows often means having no control over where the sun shines in. If those beams of light fall on your screen, you are normally out of luck. While no notebook works well in direct sunlight, the XPS 13 is at least passable. The screen coating knocks the light levels down some, and eliminates glare, but that alone does not get the job done. Dell has configured the XPS 13’s LCD with higher contrast and color ratios so that images show up much better under brightly lit conditions. Sitting beside a similar notebook without that technology, we found we were able to read our email on the XPS 13 with a little squinting, while text was completely obscured on the second unit.

The addition of the solid state hard drive is another condition-defying feature since the lack of moving parts makes the XPS much less susceptible to bumping around. We streamed a movie from the back of a vehicle while also running a virus scan. Despite the country roads outside, the XPS never skipped or stalled.

Finally, the 7.9 by 12-inch frame means that the XPS 13 can squeeze into tighter spaces where similarly classed notebooks won’t fit. That includes the tray table on most airplanes and trains. All of those features make the Dell XPS 13 (9350) a great companion for the road.

Although not rugged by military standards, the XPS 13 nonetheless includes features that improve its survivability on the road. A one-piece aluminum frame eliminates both weak points and weight for its 2.71-pound package. It also includes a 128-gigabyte solid-state hard drive with no moving parts. Even working in the backseat of a cab during a rough ride will not endanger the read and write processes for the hard drive, regardless of how many potholes lie in wait.

The Core i5 processer, backed up by 8G of high-performing LPDDR3 SDRAM, worked with the Microsoft Windows 10 Pro 64-bit operating system to quickly open and process whatever files we threw at it, from Excel to PowerPoint to Photoshop.

Since travelers must be able to work quickly and accurately, the touchpad on the XPS 13 also has been redesigned for responsiveness. The difference is easily noticeable to anyone who has dealt with skipping cursors and inaccurate clicks with touchpads in the past. The XPS 13 responded to every touch, drag and click that we tried out on it, without error.

The XPS 13 is a precision notebook designed with road warriors in mind. It would be at home with a director or a rank-and-file worker who needs a reliable tool in the field and doesn’t want to be weighed down.