Flash no longer represents the future of storage: The future is here. The plummeting cost of this solution is one reason why flash has quickly displaced ­spinning disks in governments and enterprises alike: Flash prices are approaching $5 per gigabyte, according to 451 Research.

Beyond cost savings, in Lake County, Ill., physical space and energy efficiency are included among the bottom-line benefits.

“We’ve gone from five fully populated 42U racks to less than one rack,” says Forest Pennington, acting chief technology officer. “We’re now looking at replacing our chillers because we don’t need to cool the rooms nearly as much.”

The space savings also can be measured in terms of reclaimed memory.

“We’ve seen upward of 78 percent in some areas,” Pennington says.

By far, performance tops the list of benefits realized through flash storage deployments for state and local users, especially in setups with several cloud-based and virtual desktops, or in data- and analytics-intensive use cases where high performance tops capacity as an end goal. 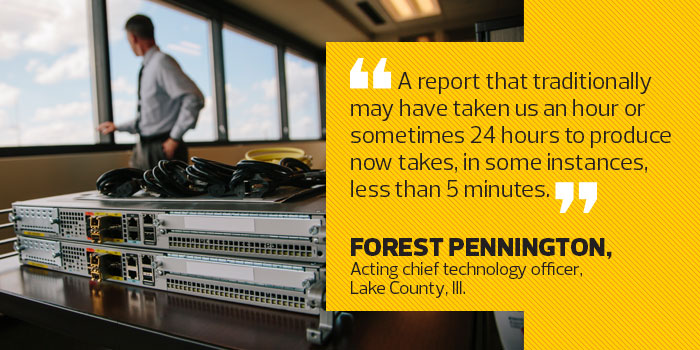 In Lake County, the initial flash deployment in 2012 was designed to improve performance in several intense database applications.

“A report that traditionally may have taken us an hour or sometimes 24 hours to produce now takes, in some instances, less than five minutes,” Pennington says. “We’re receiving a lot of appreciation from customers on the web-based services we provide.” In California, the Alameda-Contra Costa Transit District sees similar benefits, having leveraged flash for virtualized applications.

“We have no spinning disks in our back end any more,” says Mike Carvalho, one of the district’s network engineers. “We love it. It’s phenomenal performance for server startups and migrations. I wouldn’t be surprised if, five years from now, there’s no more spinning disks.”

Lake County recently migrated to a new flash platform manufactured by Tegile. Before the update, the team spent 18 months looking at how different vendors’ solutions addressed requirements such as encryption, density and integration with its core infrastructure, including VMware.

“The challenge — even inquiring with vendors at user group ­seminars such as VMworld — was finding a solution that offered the security that adhered to regulations, such as HIPAA, PCI, PHI, etc.” Pennington says. “Encryption BPS technology, with a flexible component to account for ­disaster recovery in the design, is something that challenges many vendors.”

The county’s encryption requirement also was related to its use of cloud services.

“We began to wonder how we can integrate into the cloud,” Pennington says. “With SaaS and cloud-based solutions such as Azure or Office 365, we identified a hybrid requirement (transferring data between the cloud and on-premises, with appliances acting as a proxy). I wanted to emphasize encryption at rest and in transit, whether that be in a raw or formatted state.”

For organizations that haven’t yet made the switch to flash, one common concern is cost. Disaster recovery benefits factor heavily into the equation when it comes to long-term benefits.

“In disaster recovery, you basically restore files in sequence, and you might actually use tape as a result because you can stream at full tape speed, so flash generally isn’t cost-effective,” says Rob Enderle, Enderle Group president and principal analyst. “But, in areas where there are a lot of earthquakes, a lot of low-frequency sound — such as race tracks or airports — or where the data center is mobile, as with first responders or the military, flash is preferred.”

Frequent, fast backups also are key for responding to cybersecurity attacks or hacks, especially when ransomware is in play. Flash can potentially reduce the amount of data lost when companies refuse to pay hackers for encryption keys, Enderle says.

The technology’s svelte size brings with it a few other considerations, particularly when it comes to physical security.

In flash deployments, the benefits far outweigh the cost of beefing up physical security, Lake County’s Pennington says: “It’s made our lives so much easier and provided so much value.”